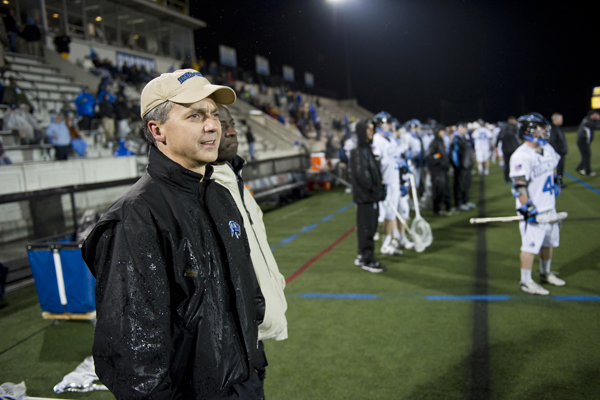 Early last month, Andrew Cosgarea stood in the rain hoping to be invisible. He prefers it that way.

Dressed in a black Blue Jays rain jacket and tan Johns Hopkins baseball cap, he watched as the men’s lacrosse team took on the Great Danes of Albany on a chilly, rainy Friday night on Homewood Field.

From his sideline vantage point, Cosgarea, head team physician for Johns Hopkins’ Athletic Department, hears it all: coaches’ shouts, players’ grunts and the crash of lacrosse sticks and shoulder pads. Now and again, he hears an injury, a cringe-inducing pop or worse. On that night, an Albany player tore his ACL a few feet in front of him.

“I knew the second it happened,” Cosgarea said. “It was just a classic ACL tear.”

Cosgarea immediately examined the athlete, assessing the extent of the injury and letting the player know what would come next in terms of care. He likes to get to know his patients, even ones he might never see again, and educate them on their ailments and treatment options. Cosgarea has decades of experience to lean on.

In sports terms, Cosgarea has entered his 19th season of jock healing.

Cosgarea joined Johns Hopkins in 1998 as an assistant professor in the School of Medicine’s Department of Orthopaedic Surgery. He became the Blue Jays head team physician in 2001.

Since 2008, he’s been director of Orthopaedic Surgery’s popular and well-regarded Sports Medicine Division and was recently promoted to full professor. Prior to joining Johns Hopkins, Cosgarea was an assistant professor of orthopedic surgery at the Ohio State University Medical Center and an orthopedic consultant with the Ohio State Athletic Department.

Cosgarea specializes in the surgical and nonsurgical treatment of problems in active individuals, with an emphasis on knee, shoulder, ankle and elbow injuries. He earned his medical degree at Jefferson Medical College in Philadelphia in 1987. After a residency at the University of Rochester, he came to Johns Hopkins in 1992 for a yearlong sports medicine fellowship.

Cosgarea also applies his talents in the field of professional sports. From 2000 to 2010, he was a team physician for the Baltimore Orioles, and still serves as a consultant with the O’s. He’s also been a team physician for the short-lived Baltimore Bayrunners of the now-defunct International Basketball League and the Rochester Americans of the American Hockey League.

As the Blue Jays’ head team physician, Cosgarea is ultimately responsible for the care of more than 700 varsity athletes at Johns Hopkins. He works closely with Brad Mountcastle, head athletic trainer, and his staff to provide health coverage for the teams, everything from pre-season physicals to gameday coverage.

In a sense, all the team physicians and trainers are an extension of Cosgarea.

“Basically, the buck stops here,” Cosgarea said in a recent interview in his office at the Johns Hopkins Health Care and Surgery Center at Green Spring Station. “Anything that is done with the athletes from a medical perspective, I’m responsible for. That includes the initial assessment, surgeries, rehabilitation, trainer care, clearance to play and any treatment decisions.”

When attending home games, Cosgarea also makes his services available to the visiting team, as was the case in the game versus Albany.

In consultation with the Albany player on the sidelines and in the training room, Cosgarea learned that the player, a senior, had never had a knee injury before and had made that same on-field cutting maneuver thousands of times. This one time, something popped. His season was over.

“The player also knew the second it happened,” he said. “I spoke with him to let him know what was going on and made myself available to his parents if they needed more information or advice.”

Cosgarea has seen his fair share of ACL tears, what he calls the most common serious injury to varsity athletes.

“It’s not necessarily turf or natural grass surface that is the culprit; there are so many factors that go into this injury,” he said. “We have excellent facilities at
Johns Hopkins, excellent pre-season preparation, and the equipment is outstanding. We have the best of the best, and still these injuries happen. There’s just no way to prevent every ACL tear from happening.”

The most common injuries Cosgarea tends to are contusions and sprains. In no particular order, other frequent injuries are shoulder dislocations, shoulder separations and concussions—a hot topic in every level of sports these days.

“We pay a tremendous amount of attention and are very careful with concussion treatment,” he said. “In the last several years, the medical community and society in general have become much more aware of the seriousness and cumulative effects of concussions.”

In April 2010, the NCAA released a set of guidelines mandating that each school establish its own concussion management plan, which must stipulate that a player who shows symptoms of a concussion may not return to practice or play on that day. The student-athlete must then be evaluated before rejoining the team.

“These are excellent guidelines,” Cosgarea said. “Although in medicine nothing is ever black and white, it’s shades of gray. It’s certainly in the athlete’s best interest. And it also makes it easier for the coaches, the officials, the trainers and the physicians when it’s accepted and recognized that we are taking a very conservative approach to treating even a suspected concussion.”

Although athletes in general want to get back on the field of play as soon as possible, Cosgarea said that modern varsity athletes think big picture.

“They have a long future in front of them, and very few of them will have a professional career,” he said. “Johns Hopkins athletes in particular are going on to graduate school, medical school, law school, business schools. They need 100 percent of their cognitive abilities to be successful.”

As of press time, the Johns Hopkins men’s lacrosse team was 10-2 and ranked No. 2 in the USILA Coaches poll and No. 3 in the Inside Lacrosse poll. Cosgarea said that he considers himself a huge fan of the Johns Hopkins teams, and feels the highs and lows of the season.

While he’s happy to be part of a winning team, Cosgarea said that he will leave the accolades to the players and coaches.

“Most of what we do is behind the scenes,” he said. “In the optimum situation, nobody knows about the team physician. Either you are preventing an injury from happening or managing an injury so that he or she can successfully play the next game.”

The Sports Medicine Division, a team of nationally recognized leaders in the field, treats patients in seven locations in the Baltimore area. In addition to the Blue Jays teams, the staff cares for players from the Baltimore Orioles, Navy football, area high school sports teams and thousands of everyday athletes, from the 12-year-old middle schooler who plays lacrosse to the 72-year-old recreational tennis player. John Wilckens, an associate professor in the School of Medicine and medical director of Johns Hopkins’ White Marsh Ambulatory Surgery Center, serves as a consultant for the United States Naval Academy and as a team physician for the Baltimore Orioles.

Although he no longer serves as a full-time Orioles team physician, Cosgarea still sees members of the team and other professional athletes, many of whom come referred by sports agents or former patients.

Speaking of the future team physicians of the world, Cosgarea foresees no shortage of aspirants. Currently, sports medicine is the most common subspecialty in orthopedics, itself an incredibly popular field.

“Why? Because it’s the most fun,” said Cosgarea, himself an athlete who competes in open-water swim races. “We are taking care of relatively healthy, proactive, motivated and outgoing individuals. But it’s also the most demanding field because the expectations are extremely high. If I’m taking care of a trauma patient, in the most extreme example, they are happy to keep their leg. If I take care of an athlete, they expect to get back to the same level they were at before the injury. They want to get back to perfection. Anything less than 100 percent is not acceptable for most.”

And that, he said, goes for everyone—the weekend runner as well as the All-Star major leaguer.