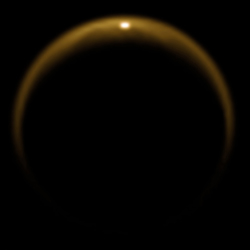 Sunlight reflects off a Titan lake in this image captured by NASA’s Cassini spacecraft. The Titan Mare Explorer (TiME), a candidate for NASA’s next Discovery-class mission, would perform the first direct inspection of an ocean environment beyond Earth by landing in, and floating on, a large methane-ethane sea on the cloudy, complex moon of Saturn. Photo courtesy of NASA

The Johns Hopkins University Applied Physics Laboratory is managing a project to explore the organic seas of Saturn’s moon Titan, one of three proposals selected by NASA last week as candidates for the agency’s next Discovery Program mission.

The Titan Mare Explorer, or TiME, would perform the first direct inspection of an ocean environment beyond Earth by landing in, and floating on, a large methane-ethane sea on the cloudy, complex moon. The mission would be led by principal investigator Ellen Stofan of Proxemy Research in Gaithersburg, Md. Lockheed Martin in Denver would build the TiME capsule, with scientific instruments provided by APL, NASA Goddard Space Flight Center in Greenbelt, Md., and Malin Space Science Systems in San Diego.

Also selected were a NASA Jet Propulsion Laboratory lander that would study the Martian interior and a NASA Goddard project to land on a comet multiple times and observe its interaction with the sun. Chosen from 28 full-mission proposals submitted to NASA last summer, each investigation team now receives $3 million to develop a detailed concept study. After another review of those studies in 2012, NASA will select one to develop for launch. The selected mission will be cost-capped at $425 million, not including launch vehicle funding.

APL also has a role on the NASA Goddard mission team, to provide a high-resolution telescopic camera for the Comet Hopper spacecraft.

“NASA’s comment on the Discovery selections was, ‘If ever there was a time to demonstrate being able to think differently, this is it,’” said John Sommerer, head of APL’s Space Department. “It’s‘ common knowledge’ that outer-planets missions are billion-dollar operations, but our team proposed a lander on Titan in the low-cost Discovery mission series. Coming off the success of both the Messenger mission to Mercury and the New Horizons mission now on its way to Pluto, it’s clear that APL has met the challenge to think differently.”

The TiME capsule would launch in 2016 and reach Titan in 2023, parachuting onto the moon’s second-largest northern sea, the Ligeia Mare. For 96 days the capsule would study the composition and behavior of the sea and its interaction with Titan’s weather and climate. TiME would also seek evidence of the complex organic chemistry that may be active on Titan today, and that may be similar to processes that led to the development of life on the early Earth.

NASA’s Discovery Program sponsors frequent cost-capped solar system exploration missions with highly focused scientific goals. The Applied Physics Laboratory led the first Discovery-class mission, NEAR, which in 2000–2001 became the first spacecraft to orbit and land on an asteroid. APL also leads one of the program’s latest successes, Messenger, which began a yearlong orbit of the planet Mercury in March. NASA’s Marshall Space Flight Center in Huntsville, Ala., manages the Discovery Program for the agency’s Science Mission Directorate.

For more on NASA’s Discovery Program, go to discovery.nasa.gov.