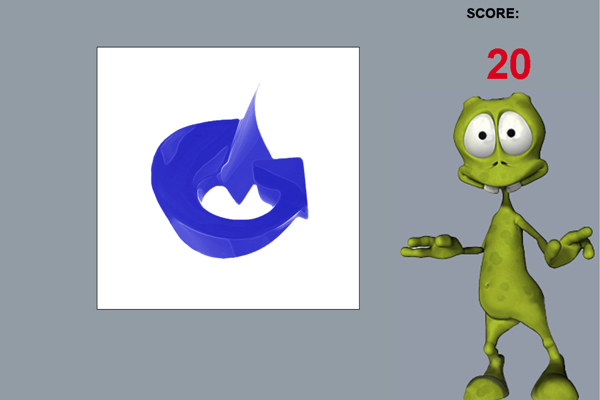 A screen shot from one of Jennifer Culbertson’s language learning experiments shows a ‘slergena’ and teacher Glermi.

Parents know the unparalleled joy and wonder of hearing a beloved child’s first words turn quickly into whole sentences and then babbling paragraphs. But how human children acquire language—which is so complex and has so many variations—remains largely a mystery. Fifty years ago, linguist and philosopher Noam Chomsky proposed an answer: Humans are able to learn language so quickly because some knowledge of grammar is hardwired into our brains. In other words, we know some of the most fundamental things about human language unconsciously at birth, without ever being taught.

Now, in a groundbreaking study, cognitive scientists at The Johns Hopkins University have confirmed a striking prediction of the controversial hypothesis that human beings are born with knowledge of certain syntactical rules that make learning human languages easier.

“This research shows clearly that learners are not blank slates; rather, their inherent biases, or preferences, influence what they will learn. Understanding how language is acquired is really the holy grail in linguistics,” said lead author Jennifer Culbertson, who worked as a doctoral student in Johns Hopkins’ Krieger School of Arts and Sciences under the guidance of Geraldine Legendre, a professor in the Department of Cognitive Science, and Paul Smolensky, a Krieger-Eisenhower Professor in the same department. (Culbertson is now a postdoctoral fellow at the University of Rochester.)

The study not only provides evidence remarkably consistent with Chomsky’s hypothesis but also introduces an interesting new approach to generating and testing other hypotheses aimed at answering some of the biggest questions concerning the language learning process.

In the study, a small, green, cartoonish “alien informant” named Glermi taught participants, all of whom were English-speaking adults, an artificial nanolanguage named Verblog via a video game interface. In one experiment, for instance, Glermi displayed an unusual-looking blue alien object called a “slergena” on the screen and instructed the participants to say “geej slergena,” which in Verblog means “blue slergena.” Then participants saw three of those objects on the screen and were instructed to say “slergena glawb,” which means “slergenas three.”

Although the participants may not have consciously known this, many of the world’s languages use both of those word orders—that is, in many languages adjectives precede nouns, and in many nouns are followed by numerals. However, very rarely are both of these rules used together in the same human language, as they are in Verblog.

As a control, other groups were taught different made-up languages that matched Verblog in every way but used word order combinations that are commonly found in human languages.

Culbertson reasoned that if knowledge of certain properties of human grammars—such as where adjectives, nouns and numerals should occur—is hardwired into the human brain from birth, the participants tasked with learning alien Verblog would have a particularly difficult time, which is exactly what happened.

The adult learners who had had little to no exposure to languages with word orders different from those in English quite easily learned the artificial languages that had word orders commonly found in the world’s languages but failed to learn Verblog. It was clear that the learners’ brains “knew” in some sense that the Verblog word order was extremely unlikely, just as predicted by Chomsky a half-century ago.

The results are important for several reasons, according to Culbertson.

“Language is something that sets us apart from other species, and if we understand how children are able to quickly and efficiently learn language, despite its daunting complexity, then we will have gained fundamental knowledge about this unique faculty,” she said. “What this study suggests is that the problem of acquisition is made simpler by the fact that learners already know some important things about human languages—in this case, that certain words orders are likely to occur and others are not.”

This study was done with the support of a $3.2 million National Science Foundation grant called the Integrative Graduate Education and Research Traineeship grant, or IGERT, a unique initiative aimed at training doctoral students to tackle investigations from a multidisciplinary perspective.

According to Smolensky, the goal of the IGERT program in Johns Hopkins’ Cognitive Science Department is to overcome barriers that have long separated the way that different disciplines have tackled language research.

“Using this grant, we are training a generation of interdisciplinary language researchers who can bring together the now widely separated and often divergent bodies of research on language conducted from the perspectives of engineering, psychology and various types of linguistics,” said Smolensky, principal investigator for the department’s IGERT program.

Culbertson used tools from experimental psychology, cognitive science, linguistics and mathematics in designing and carrying out her study.

“The graduate training I received through the IGERT program at Johns Hopkins allowed me to synthesize ideas and approaches from a broad range of fields in order to develop a novel approach to a really classic question in the language sciences,” she said.