Cementing a home for bioethics 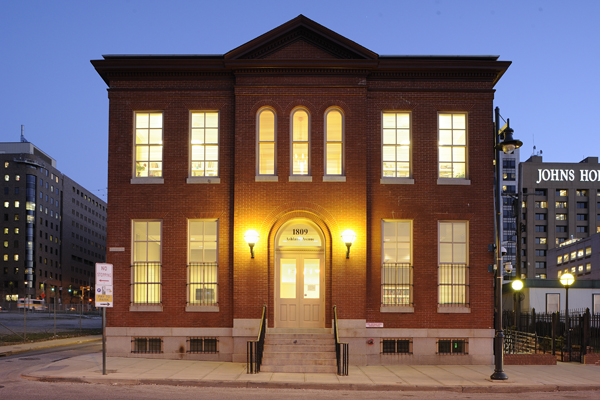 Built in 1876 as a police station, the Johns Hopkins Berman Institute of Bioethics’ first home of its own is located on Ashland Avenue in East Baltimore. The building will be officially dedicated this week as Deering Hall. Photo: Will Kirk/Homewoodphoto.jhu.edu

Three months after moving into its new home, the Johns Hopkins Berman Institute of Bioethics is already seeing the benefits of bringing its faculty and staff under one roof.

Institute Director Ruth Faden and Director of Administration Julia Chill beam with pride as they show off the wholly renovated interior of the former police station—originally built in 1876—as if giving housewarming tours to family and friends.

Meanwhile, staff who had previously turned to one another mainly by email and telephone now pop into each other’s work areas for IT support, help finding office supplies or even just someone to eat lunch with. Once a week, co-workers stroll out en masse to the green-and-purple Gypsy Queen lunch truck that parks near the building on Thursdays and bond over crabmeat tacos, truffle sliders and macaroni served in waffle cones.

“The most important aspect of this building is that, for the first time in [the Berman Institute’s] 16-year history, it gives the institute a distinct identity and place to call its own,” said Greg Bowden, the institute’s director of development. “Our faculty, most of whom hold joint appointments in other schools, go back and forth from this building to their other professional homes. That creates a rich mix of ideas and shared expertise.”

On Tuesday, May 10, the Berman Institute will debut its new building to the Johns Hopkins community with an open house from 5 to 7 p.m. The next day, the building will be officially dedicated as Deering Hall. The naming honors the longtime support of Lynn Deering, one of the leaders of the institute’s national advisory board, and her husband, university trustee Tony Deering.

The university has designated May 9 to 13 as Bioethics Week to emphasize the essential role of the multidisciplinary field in biomedical research, clinical care, public health and public discourse.

Special events this week will include:

• A public lecture on May 12 by Maryland’s secretary of health and mental hygiene, Joshua Sharfstein, who will talk about the ethics of political leadership of scientific agencies.

• On May 10, a screening of the documentary Doctors of the Dark Side, which focuses on psychologists and physicians who devised and supervised the torture of terrorist detainees.

• On May 9, a community conversation with Tuskegee historian Susan Reverby, a Wellesley College professor who recently uncovered unethical experiments conducted by U.S. health officials in the late 1940s, when Guatemalan prisoners were infected with syphilis and other sexually transmitted diseases.

“Bioethicists have studied and responded to egregious and chilling chapters in medicine and research, such as Tuskegee,” said Faden, the Philip Franklin Wagley Professor of Biomedical Ethics at Johns Hopkins. “But much of what we do is forward-looking and positive. We focus primarily on working with colleagues in science, health care and public health toward ever more thoughtful, fair and socially just ways of doing their difficult work.”

The Berman Institute consists of more than 30 core and affiliated faculty members, many with appointments in the schools of Medicine, Public Health, Nursing, and Arts and Sciences. Since the institute’s founding in 1995, faculty have published well over 1,000 articles and more than a dozen books on subjects ranging from informed consent and neuroethics to umbilical cord blood banking and tube feeding the advanced elderly.

The institute also employs a staff of 27, who are vital to its goal of contributing sophisticated scholarship on the ethics of clinical practice, biomedical science and public health, both globally and locally.

Prior to the Berman Institute’s move into its first permanent home, its faculty and staff were scattered throughout the city and Johns Hopkins institutions. The lack of a brick-and-mortar home sometimes presented challenges for monthly staff meetings and collaboration among faculty and, more broadly, hindered communication and camaraderie.

“One obvious change is that we no longer lose hours of travel time attending meetings in East Baltimore or Homewood campus space,” said Alan Regenberg, the institute’s research manager. “Beyond the hassles of being so dispersed, my staff and I were missing out on those informal opportunities to collaborate with other members of the institute.”

The 11,000-square-foot building, re-envisioned by the Baltimore-based Design Collective, is recognized by the Maryland Historical Trust and sits at 1809 Ashland Avenue, between Wolfe Street and Broadway, where the East Baltimore campus meets the East Baltimore Development Inc.’s New East Side redevelopment project.

Glimpses of the building’s former life remain: Heavy cutaways of the original radiator that once warmed handlebar-mustachioed cops now hang as wall art just inside the main entrance. And at the building’s southeast corner, an attached garage-size structure that serves as flex space for PhD students, interns and bioethics trainees is nicknamed after its original charge: “the carriage house.”

Throughout the year, the Berman Institute offers internships to students—many from the Hopkins Undergraduate Bioethics Society—who assist with the wide variety of research efforts and other projects the entity takes on. Students have participated in work related to challenges in stem cell science, bioethics-related news on the Web and a survey of medical professionalism—or lack thereof—in the television medical dramas Grey’s Anatomy and House, M.D.

In addition, the institute annually hosts visitors from sub-Saharan Africa who have been accepted into the Johns Hopkins–Fogarty African Bioethics Training Program. Based in the Berman Institute, the program brings trainees to Johns Hopkins for six months to complete graduate work in research ethics so that they can apply their enhanced understanding of bioethics at their home institutions.

“Deering Hall will be a great home for bioethics at Hopkins,” said Margaret Moon, the Freeman Family Scholar in Clinical Medical Ethics at the Berman Institute. “The dedicated space will deepen the connections within our own ethics community while establishing a stronger sense of identity for bioethics as an important part of the larger Johns Hopkins universe.”

And just as Deering Hall will be a place that nurtures collaboration and collegiality among faculty and other researchers, so will the rest of the institute’s members be emboldened by a sense of belonging—while also being fueled by a fancy, new espresso maker.

“Sometimes a casual conversation while waiting to make espresso can lead to really helpful and productive results—with either great input or even new formal collaborations being launched,” Regenberg said. “What we have now is a community. We have been able to get to know each other better, and share.”