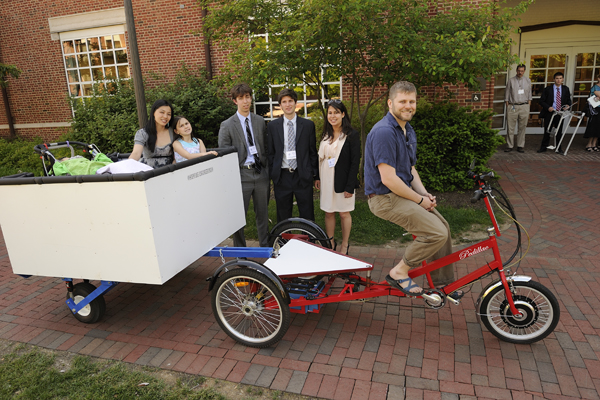 Matthew Gombolay, Ryan Decker and Elizabeth Martinez look on as the Lee family gets ready to test the motorized tricycle with wagon that they devised. Photo: Will Kirk/Homewoodphoto.jhu.edu

During two engineering design showcases last week, Whiting School students demonstrated that they had learned to think big—and, in some cases, think small.

At events on the Homewood and East Baltimore campuses, biomedical and mechanical engineering students described the many months they had spent brainstorming, designing and testing their prototypes. They also displayed and demonstrated their creations, which ranged from mammoth machines to tiny medical device components.

Many of the projects showed great potential. With further refinement, one team’s soil-burrowing robot could someday wind up on a spacecraft that explores another planet. Some of the student-developed medical innovations may eventually extend the survival of patients who require kidney dialysis, or may provide lifesaving stem cells to people with blood cancers.

Each Whiting School department has some type of capstone senior design project requirement, but mechanical and biomedical engineering students traditionally participate in the most prominent exhibitions of such work. The projects are shaped in courses set up to prepare students for the sort of real-world assignments they will face after graduation.

“This is the centerpiece of your educational experience here,” Nick Jones, the Benjamin T. Rome Dean of the Whiting School, told students at one of last week’s design showcases.

Kevin Hemker, the Mechanical Engineering Department chair, who attended both of the design days, pointed out that differences exist in the way the programs are structured.

“In Mechanical Engineering, we work closely with our industry sponsors and put emphasis on the design process to make a product or project that meets the goals put forth by the sponsor,” he said. “In Biomedical Engineering, the focus is more on innovation and new ideas, and in developing a business model for the project. The approaches are complementary.”

Master’s student Neil Shah, part of a team that developed a minimally invasive bone-grafting device, said that the design day capped a rigorous but rewarding year of study. “The experience was fantastic,” he said. “It was a perfect integration between the engineering and medical schools, and the business programs.”

The project that received the day’s top prize was the burrowing robot, sponsored by Johns Hopkins’ Applied Physics Laboratory and built by students Daniel Bagdorf, Brandon Hahn and Richard Spatz. “It was an enormous amount of work to come up with an idea for it and actually build it,” Spatz said.

But the Mechanical Engineering project that proved to be the most heartwarming was made for 5-year-old Emily Lee of Ellicott City, Md., who has a neuromuscular disease that leaves her too weak to sit or stand, and who requires constant care. Her family wanted a vehicle that would allow Emily’s father, Nate, to take Emily, her 9-year-old sister, Annabelle, and her mother, Diana, on bicycle outings.

The mechanical engineering task, dubbed Project Wheels, was taken on last fall by seniors Ryan Decker, Matthew Gombolay and Elizabeth Martinez. On Tuesday they presented to the Lee family a large motorized tricycle carefully attached to a wagon spacious enough to hold Emily in her wheelchair, along with her mother and sister. Nate Lee took the family on a test drive on the brick path beside Homewood’s Hodson Hall.

“It’s perfect! We love it!” said Diana Lee. “I can push [Emily] in her wheelchair, but there’s no way for her to feel the wind going by. This is her very first time being able to ‘ride a bike.’”

Ryan Decker, one of student designers, was pleased by the family’s reaction. “The reason I took this project was that it was a way to help people,” he said. “This is the only project where you got to see the end user enjoying it.”