Simple inexpensive test could save lives of women, unborn kids 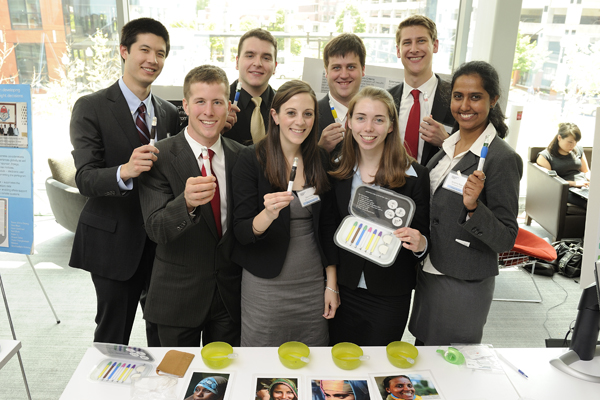 Could simple tests using chemical-filled pens and costing less than a penny per test save the lives of thousands of pregnant women and newborns in impoverished areas? A low-cost Antenatal Screening Kit that aims to accomplish this goal won the grand prize last week for a team of Johns Hopkins graduate students who entered an international competition sponsored by ABC News and the Duke Global Health Institute.

In the students’ system, pens filled with testing solutions are used to make marks on strips of paper, which are then exposed to a pregnant woman’s urine. If a mark turns the color of the pen’s cap, the test is positive. So far, the students have been refining and testing pens that can detect early signs of eclampsia, malnutrition, gestational diabetes and urinary tract infections. They also are working on simple blood tests for jaundice and anemia.

If left untreated, these conditions can jeopardize the lives of the mother and her unborn child. The pen tests, which require little training for the health workers who use them, are designed to provide an inexpensive early warning that could coax an expectant mother in a remote area to seek treatment at a clinic or hospital that may be many miles away.

“When it comes to global health, cost is an enormous barrier to care,” said Richard Besser, ABC News chief medical editor, who announced the prizewinners. “The antenatal screening test is an incredibly innovative approach to saving the lives of pregnant women.”

As grand prizewinner, selected from more than 65 video entries from university students on three continents, the Johns Hopkins Antenatal Screening Kit team will receive $10,000 from the Lemelson Foundation, as well as mentorship and support in development, marketing and distribution of their invention. Team members will also present their idea before global health experts at a conference in November in Montreal.

The Johns Hopkins team is composed of eight biomedical engineering students enrolled in a one-year master’s degree program offered by the university’s Center for Bioengineering Innovation and Design, which is affiliated with both the School of Medicine and the Whiting School of Engineering.

Monagle, unofficial leader of the student team, said that the Antenatal Test Kit originated three years ago, when he was part of a Johns Hopkins undergraduate biomedical engineering team assigned to develop a low-cost urine test for protein associated with pre-eclampsia in pregnant women, a task proposed by Jhpiego.

When he entered the master’s program last summer, he and his 14 classmates were sent to India, Tanzania and Nepal to observe global health problems firsthand. At a hospital in Nepal, Monagle, with help from Jhpiego, was able to conduct further studies on the pre-eclampsia test. Work on additional Antenatal Screening Kit components resumed when the students returned.

Jhpiego medical director Sanghvi said, “The two groups of students who worked on this have done an amazing job. Developing technologies that are simple and inexpensive is actually a very complex process, and Jhpiego is pleased that the time the students spent visiting Jhpiego’s programs in Nepal, India and Tanzania provided the perfect background for the development of practical solutions.”

He added, “The ABC award, together with several other awards that the students have won, is a recognition that engineering for global health solutions is coming of age. The partnership between Jhpiego, which has a presence in 50 countries, and the Johns Hopkins Center for Bioengineering Innovation and Design provides a perfect opportunity for the creative energy of bright student teams to make a massive difference in the global health space. These technologies are custom-built to overcome the challenges of fragile health care systems and will make a big difference for women and newborns most in need.”

Last fall, Jhpiego received a $100,000 grant from the U.S. Agency for International Development to continue its work in developing the self-test for early detection of pre-eclampsia, a project being conducted with Monagle and his teammates. As they expanded the Antenatal Screening Kit project, the students have collected about $50,000 in additional funding through business plan competitions and grants. The ABC News/Duke Global Health award will add another $10,000 to that sum.

“It’s almost surreal, and it’s really exciting,” Monagle said. “I’ve been working on this for almost three years. At first it was just a few undergrads working on this crazy idea of using a pen to save lives. Then, things really started to take off after the USAID grant came in. Now, people are starting to see the value of this project. For the ABC News award, all of these global health experts came together, and they chose us. It really validates all the things we’ve been working so hard on.”

Monagle, 23, of Jacksonville, Fla., will graduate this month. He will then become one of five Global Health Innovation Fellows who will continue to work on the test kit and other projects with Jhpiego and CBID. “I’m just trying to help people,” he said, “and to have some actual impact.”