More than 40 students from West Baltimore participate in program hosted by School of Educations, School of Engineering and Peabody Institute 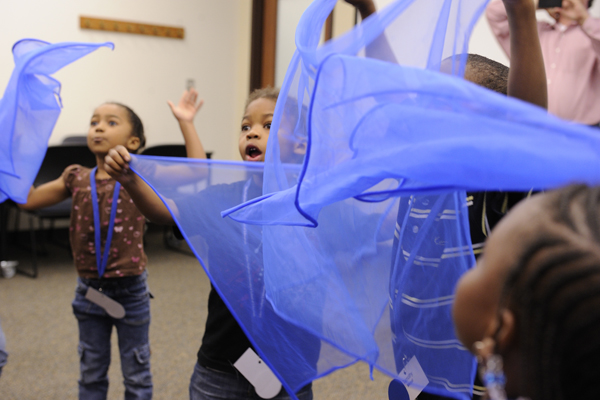 Moving to the music in a class led by Lee Dix of the Peabody Preparatory. (Photo: Will Kirk/Homewoodphoto.jhu.edu)

The program’s goal is for pre-K students to get out of the classroom and into the community, where they can take part in new learning experiences.

“We are so excited that Johns Hopkins opened its doors along with 50 of Baltimore’s most notable institutions to welcome our students for our first-ever Pre-K at Play day,” said Charlene Iannone-Campbell, director of Early Learning for city schools. “The involvement of the three Johns Hopkins schools was a memorable event that made a lasting impression on our young learners,” she said.

To help students connect learning experiences to the world around them, representatives of the three Johns Hopkins schools conducted a variety of interactive sessions for the 4-year-olds, including musical activities, computer learning projects and “slime”-making games.

In one classroom, Yolanda Abel, an assistant professor in the School of Education, taught students about using a computer keyboard. Abel, who specializes in early childhood instruction, noted that activities such as those at the Pre-K at Play event help create a foundation of knowledge that can facilitate future learning.

In a class led by Lee Dix, an instructor in early childhood music at the Peabody Preparatory, smiling students were singing and dancing. “The process of learning music at a young age can be a catalyst for better comprehension of mathematics, logic and formal music instruction,” Dix said. “Our informal approach is to expose the children to a wide variety of rhythms and tones that facilitate not only musical awareness but an appreciation of music that will serve the children well in later years.”
Christine Newman and Orla Wilson of the Whiting School of Engineering discussed with the 4-year-olds various states of matter such as liquids, which flow and take the shape of any container they are put into, and solids, which you can hold in your hand. “We showed the students there are materials like polymers that have the properties of both, and that is what we made with the students. They loved the ‘slime ball’ experiment,’’ Newman said.

Bernadette Samaco, a pre-K teacher at Samuel Morse, praised the programs. She noted that the budget for field trips was cut this year and that Pre-K at Play day was the first experience that the students had had outside the school. “The Johns Hopkins faculty and staff made us feel welcomed,” she said, “and it was a wonderful opportunity for our students to experience a trio of unique learning activities: music, science and technology.”

Baltimore Schools CEO Andres Alonso has expanded pre-kindergarten programs by 50 percent in the past three years. Test scores show that students who attend pre-K programs do better on reading and math tests than those who do not attend.