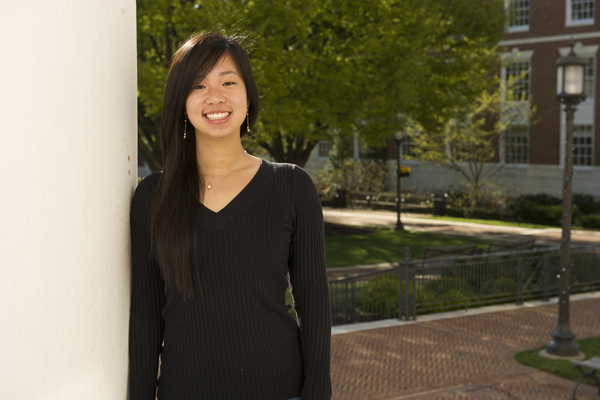 Karen Hong came to the William Donald Schaefer House for Boys in Baltimore’s Reservoir Hill neighborhood as a freshman four years ago, believing she had something to teach the 14- to 18-year-olds receiving residential drug and alcohol treatment at the Maryland Department of Juvenile Services facility.

But it didn’t take her long to discover that she was the one who was learning the most.

“I felt they were teaching me more than I was teaching them,” said Hong, 22, a senior public health studies major from Santa Rosa, Calif. “Mostly, they’ve taught me a lot about life. After all, these young men are not that much younger than me, and many of them have witnessed much more in life than I have. Their honesty about the challenges they have faced, and still face, really humbles me.”

Hong came to Schaefer House as part of her volunteer work with a group called CRASH: Creating Responsibility in Adolescent Sexual Health. Organized a decade ago by Johns Hopkins medical students, CRASH brings together student volunteers from across university divisions around the goal of educating adolescents on aspects of sexual education and health, including sexually transmitted diseases, contraception, pregnancy, and sexual health and hygiene.

Hong was attracted to that mission for a simple reason: The topics of human sexuality and sexual health were practically verboten in her household, headed by traditional parents who were immigrants from the People’s Republic of China.

Dissatisfied by the vague way her family and middle school teachers addressed sexual and reproductive health, Hong set out to learn about the topic on her own. She became fascinated with the biological, cultural, psychological and chemical aspects of human sexuality.

When she arrived at Johns Hopkins, that interest quickly led her to CRASH and the young men at Schaefer House.

Hong graduates this week after not only becoming CRASH’s youngest-ever president (in 2008) but also having revamped the organization’s curriculum to make it more relevant and “user friendly” to young men like those who live in Schaefer House.

“Some of these youth had witnessed domestic violence, teen pregnancy and even rape, and many were fathers already when I met them,” she said. “They told me about their lives, and their stories were why I wanted to create a curriculum that encouraged positive dialogue about sexual health. Instead of lecturing them about seminiferous tubules and their role in the male reproductive system, I wanted to talk to them—and not down to them—about testing for sexually transmitted diseases, handling relationships and common misconceptions about pregnancy and contraception, stuff they could and, I hoped, would use in the real world.”

To create the new curriculum, Hong turned to the array of experts available to her within Johns Hopkins. Students at the School of Medicine checked the scientific accuracy of the lessons she wrote, and a student from the School of Nursing helped create a unit on domestic violence that Hong maintains is the first of its kind among similar programs.

The resulting curriculum is interactive, with discussions, hands-on activities and even games. The Condom Game, for example, illustrates how rapidly sexually transmitted diseases and infections can spread when condoms are not used. In the game, each student grabs a brightly colored condom from a box and then “high fives” five of his classmates. Participants are then told that the possessor of the sole yellow condom represents someone with an STD/STI who did not use a condom, meaning he had five “high risk” encounters. The five students who had contact with the owner of the yellow condom are asked to stand, and then anyone who had contact with any of them has to stand and so on. The game is very effective, Hong says, in communicating the importance of using condoms.

Of special assistance to Hong was Laurie Schwab Zabin, professor and founding director of The Bill and Melinda Gates Institute for Population and Reproductive Health at the Johns Hopkins Bloomberg School of Public Health. Zabin guided Hong through the latest research on reproductive-health education.

“Karen is one of those rare students who can carry thinking into doing,” Zabin said. “She not only raises interesting questions, but she also puts her interests to work. Her creation of the CRASH curriculum for teens didn’t end with its design; she actually managed a volunteer group to test its effectiveness.”

And it did turn out to be effective. According to data collected by Hong and other CRASH volunteers, 95 percent of the participants remembered and practiced the information they learned through CRASH, such as using condoms or getting tested regularly for sexually transmitted diseases. Ninety-eight percent of the students claimed that the new CRASH program was more effective and “user friendly” than what they learned in middle and high school health courses. Hong was particularly pleased when 80 percent of the youth reported that CRASH volunteers treated them like peers, rather than “talking down” to them.

CRASH volunteer membership is now five times its original size and growing, and the current 30 student volunteers are working to take the program to more sites and people throughout Baltimore City, including to the Boys and Girls Clubs.

“I am responsible for more than 450 undergraduates in our program, and I can assure you that Karen is a star,” Gebo said. “[Karen] has worked closely with the men at the Schaefer House—not an environment that many young women would approach, much less embrace the way she has. This work has not been without its challenges, but Karen has overcome them with her usual enthusiasm. She fully recognizes challenges as learning opportunities and appreciates those lessons.”

In fact, Hong considers the time she has spent on CRASH and with the residents of Schaefer House to be among her most meaningful at Johns Hopkins because it afforded her the opportunity to make a difference and also the chance to get to know some of the young men as people, with dreams and hopes of their own.

“Elijah, one of the older boys, wrote beautiful poems and showed me photos of his newborn son, but he could not go to college and fulfill his dream to be a teacher anytime soon because he had to go to work right after leaving the transition home to support his new family. Those are the kinds of stories that inspired me to want to do what I could to help,” said Hong, who plans to someday become an OB-GYN. “I aspire to make others realize that sexual and reproductive health is an important issue that needs a voice in every community around the world.”