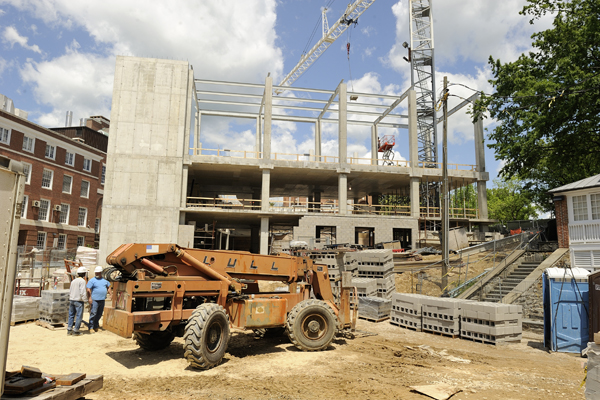 While the Brody Learning Commons, above, is moving into higher gear, two other major projects—the Undergraduate Teaching Lab and Biology Research Wing and the Cordish Lacrosse Center—are just getting started. — Photo: Will Kirk/Homewoodphoto.jhu.edu

Here we grow again. Cranes, hard hat crews and the pop of nail guns will be omnipresent this summer on the Homewood campus as a bevy of capital projects, big and small, continue or commence.

The progress has a downside, however, as the sheer volume of projects will lead to some detours and access issues from June into the fall semester.

Prominently, construction ramps up on the Brody Learning Commons, the new library facility that flanks the Milton S. Eisenhower Library. Concrete pouring and steel erection finished up in May, but framing kicks into gear over the next few months. The work will limit access to the Krieger Hall and Maryland Hall loading docks, and the plaza between the library and learning commons will be closed for the majority of the summer. Access from The Beach to the Keyser Quad will now be on the library’s north side.

The Brody Learning Commons, scheduled to open in summer 2012, is a four-story facility designed to foster collaborative learning and will include a quiet reading room, 15 group study rooms, an atrium and cafe, and robust technology throughout. The building is named in honor of William Brody, the 13th president of the university, and his wife, Wendy.

Renovation work will continue in the Whiting School’s New Engineering Building, related to a new center dedicated to the study of the physics of cancer. Researchers from the Johns Hopkins Institute for NanoBioTechnology were awarded a $14.8 million grant from the National Cancer Institute to launch the research center, aimed at unraveling the physical underpinnings that drive the growth and spread of cancer. 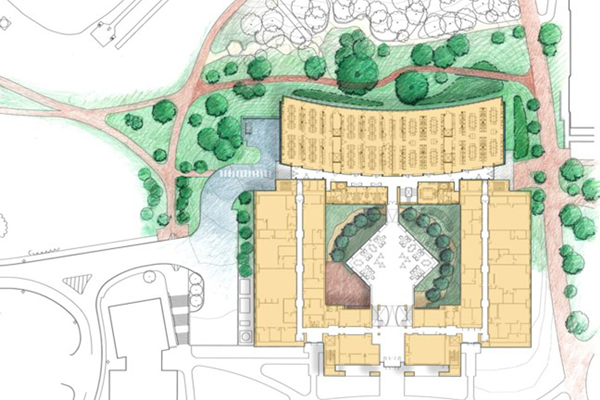 The New Engineering Building will feature new lab and office space dedicated to this effort. Work on the building’s ground floor began last summer and is scheduled for completion by mid-September. Construction on the second floor began in May and will continue through Aug. 19. The building’s roof will be replaced in August. The renovations will reroute pedestrian and vehicular traffic in the area.

While a number of existing projects wind down or continue, two new major construction projects will get under way.

Notably, work on the new Undergraduate Teaching Lab and Biology Research Wing kicks off this month, with a groundbreaking set for today. The 105,000-square-foot facility will complete the existing Mudd Hall, Levi Building, Biology East complex by closing off the open fourth side of the courtyard and will create a new face toward the Bufano Sculpture Garden to the north. The northern facade of the new facility will be entirely glazed to maximize views of the wooded hillside and allow ample daylight to enter the labs. A new enclosed student gathering spot with coffee bar—to be called Mudd Commons—will be created on the rooftop of the existing Mudd Hall lecture hall to serve as a focal point for interaction for the natural sciences community. The interior quad of the complex will feature rain gardens that provide natural treatment, control and absorption of storm water. Rain gardens will be created outside the complex as well.

Undergraduate teaching laboratories for Biology, Chemistry, Neuroscience and Biophysics will take place on the lower three floors of the new building, with direct student access from both Mudd Commons and the new walkway to the east. The upper floor will accommodate Biology Department research and have lab space, meeting and seminar rooms, and faculty offices for seven principal investigator–led research groups. 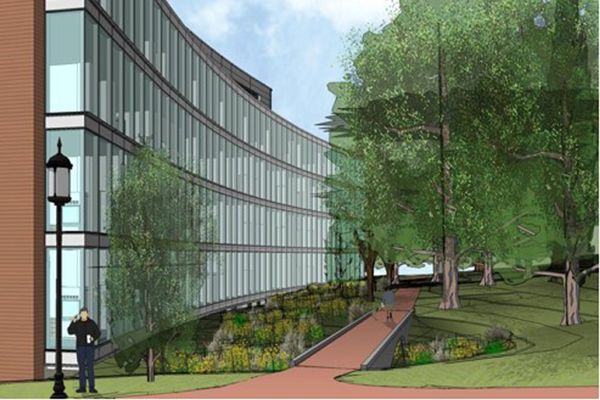 The occupancy date for the facility is scheduled for summer 2013. While access to the Mudd complex loading dock will be maintained, the north end of the parking area outside of Levi will be closed for the duration of the project. Pedestrian traffic will be rerouted north of the construction area.

Construction also begins this month on the Cordish Lacrosse Center, a $10 million 14,000-square-foot facility being built at Homewood Field’s east end as a new home for the men’s and women’s lacrosse programs.

The first facility of its kind, the Cordish Center will house locker rooms and coaches’ offices for the men’s and women’s teams, a 50-person theater, a conference room, an academic center and a training room. A reception area on the second floor will lead to a patio overlooking the field that can be used for receptions and for game day spectators. On the field level, exhibits will chronicle the history of both programs.

The center is named for David Cordish, chairman of the Cordish Cos., a 1960 Johns Hopkins graduate, three-year lacrosse player and lead donor to the project. Completion is slated for spring 2012. While the exact site logistics are still being determined, it is anticipated that access to the campus through the North Gate will be maintained.

Also in June, renovation begins on Macaulay Hall’s basement. A utility shutdown in the building will be required but will be coordinated with the occupants.

Last month, Shaffer Hall closed for renovation and will remain offline until late August. The work inside includes air handling unit replacement, complete renovation of the second and fourth floors, and minor reconfiguration of the ground- and third-floor classrooms. The work will temporarily reroute pedestrian and vehicular traffic in the building area.

The Levering Hall dining area will be closed for the summer while it receives a cosmetic upgrade that includes new lighting, flooring and seating.

The ongoing renovation to Dunning Hall’s third and fourth floors will be completed by the end of June. The building’s elevator will be modernized and out of service during the months of June and July.

Garland Hall will undergo a minor renovation and reconfiguration of the first, second and third floors in July and August. The building will remain occupied, however, and construction coordinated with the occupants.

A section of the Johns Hopkins Club roof will be replaced this summer, and it’s likely that a few spaces on the top level of the adjacent garage will be utilized for staging.

In July, enlargement of the Bloomberg Hall computer server room will be completed. The work will require some utility shutdowns within the building, to be scheduled in advance.

The second floor of the Homewood Apartments will be renovated to create new Health and Wellness and Counseling centers. The project is scheduled for completion later this month, with the centers to relocate there in July.

AMR I will be closed for the summer as miscellaneous infrastructure upgrades are being completed. The offices for the campus food service provider, Aramark, will be temporarily relocated to the Homewood Annex, located on 3003 N. Charles St.

Jody Latimer, director of Design and Construction for the Homewood Office of Facilities Management, said that like last summer, Homewood will bristle with construction crews.

“There will be a very high level of construction the next few months, especially with groundbreaking on two major projects,” she said.

Latimer said that the most significant “pedestrian bottleneck” will be on the south end of the campus near the Brody Learning Commons, and that large cranes will be associated with that building and the New Engineering Building and Shaffer Hall projects.

She said the majority of the “real noisy work” will be done prior to 9 a.m., although work will continue through the workday.

In addition, as part of the Charles Street reconstruction project announced earlier this spring, BGE will replace the gas main in the southbound lanes of Charles Street between 28th Street and University Parkway. This work is slated to begin in June and continue through the fall. BGE plans to maintain traffic along Charles Street utilizing steel plates in the work areas. There may be periodic outages in JHU facilities as service is being moved from the old main pipe to the new pipe.