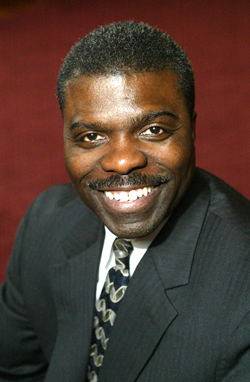 Armbrister will work closely with the university’s president, Ronald J. Daniels, helping him coordinate initiatives across the university and manage short- and long-term issues. He also will oversee the finances and administration of the president’s office.

“Clay is an extraordinarily accomplished individual who brings senior leadership experience from government, higher education and the nonprofit sector,” Daniels said. “I am very excited that he has agreed to make his new home at Johns Hopkins and look forward to welcoming him back to higher education.”

Armbrister, who will join Johns Hopkins on July 11, has since January 2008 been chief of staff to Philadelphia Mayor Michael A. Nutter, a job in many ways similar to his new position. He has advised the mayor, coordinated policy across cabinet agencies and managed departments in the mayor’s office.

Armbrister said that returning to education is a natural step for him after serving as executive vice president and chief operating officer at Temple from 2003 to 2008.

“I had always thought of returning to higher education after my public sector work,” Armbrister said. “The opportunity to work for President Daniels at one of the finest institutions in the country is an opportunity that, when presented, you enthusiastically accept.”

Armbrister said he enjoys the largely behind-the-scenes role played by a chief of staff, advising his principal and supporting priorities outlined by the mayor or, now, the president.

“I like to think that I’m collegial,” Armbrister said. “I’m a team player, interested in trying to get things done and achieve the overall objectives. It’s not about glory; it’s about trying to get the work done.”

At Temple, Armbrister reported to the president and supervised student affairs, admissions and financial aid, facilities management, intercollegiate athletics, campus safety and other units. Before joining Temple, he was an investment banker at UBS PaineWebber Inc. in Philadelphia.

Armbrister also served as city treasurer of Philadelphia from 1994 to 1996. From 1996 to 1998, he was managing director of the Philadelphia public school system, where he reported to the superintendent and was responsible for finance and administration. He began his professional career as an attorney in the public finance department of the law firm Saul, Ewing, Remick and Saul, where he practiced for 12 years, the last six as a partner.

Armbrister is a 1979 graduate of the University of Pennsylvania, where he majored in economics and political science, with a concentration in public policy. He earned his law degree at the University of Michigan in 1982.

Armbrister will serve as successor to Jerome D. Schnydman, executive assistant to the president, who announced last month that he will retire in June 2012 after a 37-year career at his alma mater. Armbrister will be nominated upon Schnydman’s retirement to succeed Schnydman in his other role as secretary of the board of trustees.