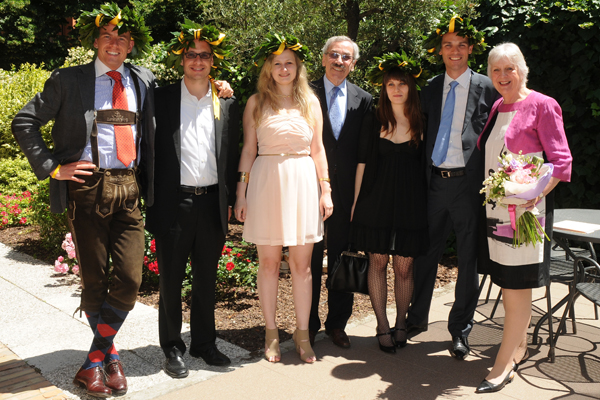 On May 28, a cloudless sunlit Saturday morning in Bologna, Italy, the SAIS Bologna Center Class of 2011, parents, friends, faculty and staff gathered in the center’s auditorium for the annual commencement ceremony.

Remarks were made by Kenneth H. Keller, director of the center and professor of science and technology policy, and Erik Jones, professor of European studies, who spoke about “What to Expect in the Next 20 Years (and More): A Retrospective View.”

In accordance with tradition, C. Grove Haines Awards in European Studies, International Relations and International Economics were presented to three students—Christina Politi of Greece, Martin Ross of Canada and Annabel Lee of the United States, respectively—for their superb work in these academic disciplines.

The Johns Hopkins Alumni Association Excellence in Teaching Award for SAIS is awarded each year at the Bologna Center, based on a student vote conducted at the end of the academic year. This year two professors claimed the honor. Arna Hartmann, adjunct professor of international development and consultant to the Brookings Institution, the International Monetary Fund and the World Bank, and Fabrizio Jacobellis, adjunct professor of international economics and senior manager in the Department of Economics at Ernst & Young in London, were the students’ pick this year. In true Bolognese fashion, the ceremony was followed by an elegant lunch on the Robert J. Abernethy Terrace for the nearly 300 people present to honor the Class of 2011 and send them off into the world with their stomachs, minds and spirits full.