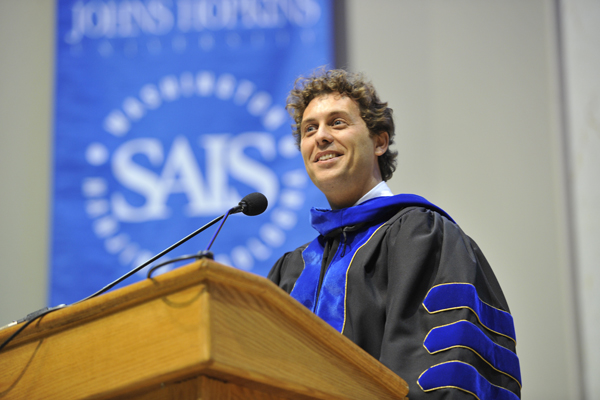 Matthias Matthijs, a professorial lecturer of international economics and international relations at SAIS, received the 2011 Max M. Fisher Prize for Excellence in Teaching at the school’s commencement ceremony on May 26 in Washington, D.C.

The award is presented each year to one professor selected by the students.

Matthijs has been teaching part time at SAIS since summer 2005 and has offered graduate courses on microeconomics, macroeconomics, economic development, international trade theory, European integration and international political economy. In spring 2010, he spent a semester at SAIS’ Bologna Center, teaching trade theory and a seminar on globalization and the world economy. He currently serves as an assistant professor of international economic relations at American University’s School of International Service in Washington, D.C.

He specializes in the politics of economic crises and the role of economic ideas in economic policymaking, as well as international and comparative political economy, and regional integration. Matthijs’ current research focuses on the global financial crisis, Europe’s sovereign debt crisis and the global battle for economic ideas.

In 2010, Matthijs published his first book, Ideas and Economic Crises in Britain From Attlee to Blair (1945–2005). The book is based on his doctoral dissertation, which won the 2010 Samuel H. Beer Prize for Best Dissertation on British Politics by a North American scholar, awarded by the British Politics Group, a related group of the American Political Science Association. In addition to his teaching experience, Matthijs has served as a consultant to the Foreign Investment Advisory Service of the World Bank, the Economist Intelligence Unit and Oxford Analytica.

Another student wrote, “If there is one person I can think of who should get this prize, it’s Professor Matthijs. He’s a wonderful economics professor and has the ability to relate economic theory to day-to-day problems like no one else.”

A native of Belgium, Matthijs received his master’s and doctorate in international relations from SAIS.

The Max M. Fisher Prize for Excellence in Teaching was established in 2007 by the family of Max Fisher as a tribute to his life and his abiding interest in international affairs. Former chairman of Aurora Gasoline, Fisher was a dedicated advocate for the Jewish community and for his hometown of Detroit. He served as an adviser to Republican presidents from Dwight Eisenhower to George H.W. Bush and as an unofficial ambassador between the United States and Israel. His daughter, Marjorie Fisher, is a trustee of The Johns Hopkins University.

In the fall, Matthijs will give a public lecture at SAIS, one of the stipulations of receiving the prize, on “Enduring Macroeconomic Imbalances in the World Economy.”