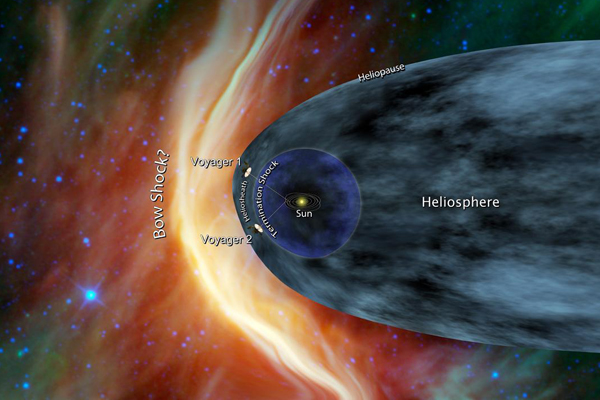 This concept illustration shows NASA’s two Voyager spacecraft exploring a turbulent region of space known as the heliosheath, the outer shell of the bubble of charged particles around our sun. After more than 33 years of travel, the two Voyager spacecraft will soon reach interstellar space, which is the space between stars. Photo: NASA/JPL-CALTECH

Surprising observations from NASA’s Voyager 1 spacecraft raise questions about the radial extent of the heliosheath—the heated outer shell of our sun’s sphere of influence—leading scientists to believe the intrepid probe is closer to interstellar space than they thought.

Launched nearly 34 years ago and now cruising through space some 10.8 billion miles from the sun, Voyager 1 has crossed into an area where the velocity of the hot ionized gas, or plasma, emanating directly from the sun has slowed from 150,000 miles an hour down to zero. Writing in the June 16 issue of the journal Nature, a team of Voyager scientists led by Stamatios Krimigis of the Johns Hopkins University Applied Physics Laboratory shows that the outflow of the solar wind may have stopped because of the pressure from the interstellar magnetic field in the region between stars.

Since December 2004, Voyager 1 has been monitoring the bulk velocity of plasma in the heliosheath, a reservoir of energetic ions and electrons. It has now entered a transitional “layer” surrounding our solar system between the solar wind and the interstellar medium. The radial component of this velocity has been decreasing almost linearly over the past three years from more than 40 miles per second to zero. The transverse component that had been flowing sideways relative to the sun is also trending toward zero.

“This tells us that Voyager 1 may be close to the heliopause, or the boundary at which the interstellar medium basically stops the outflow of solar wind,” said Krimigis, principal investigator for Voyager’s Low Energy Charged Particle instrument, which was built at APL. “The extended transition layer of near-zero outflow contradicts theories that predict a sharp transition to the interstellar flow at the heliopause—and means, once again, we will need to rework our models.”

Our sun gives off a stream of charged particles that form a bubble in the interstellar medium, known as the heliosphere, around our solar system. The solar wind travels at supersonic speed until it crosses a shockwave called the termination shock. At this point, the solar wind dramatically slows down and heats up in the heliosheath.

Voyager 1, launched on Sept. 5, 1977, crossed the termination shock in December 2004 and moved into the heliosheath. Scientists have used directional flow data from the Low-Energy Charged Particle instrument to deduce the solar wind’s velocity.

When the speed of the charged particles hitting the outward face of Voyager 1 matched the spacecraft’s own outward speed, researchers knew that the net outward speed of the solar wind was zero. This occurred in April 2010, when Voyager 1 was about 10.6 billion miles from the sun.

Because the velocities can fluctuate, scientists watched several more monthly readings before they were convinced that the solar wind’s outward speed actually had slowed to zero. Analysis of the data shows that the velocity of the solar wind has steadily slowed at a rate of about 45,000 mph each year since August 2007, when the solar wind was speeding outward at about 130,000 mph. The outward speed has remained very nearly zero (or sometimes even slightly inward) for the past year.

A sister spacecraft, Voyager 2, was launched on Aug. 20, 1977, and is 8.8 billion miles from the sun. The two spacecraft have been traveling along different trajectories and at different speeds. Voyager 1 is traveling faster, at a speed of about 38,000 mph, compared to Voyager 2’s velocity of 35,000 mph. Therefore, in the next few years, Voyager 2 may encounter the same kind of extended transition layer as Voyager 1 found.

The Voyagers were built by NASA’s Jet Propulsion Laboratory in Pasadena, Calif., which continues to operate both spacecraft.