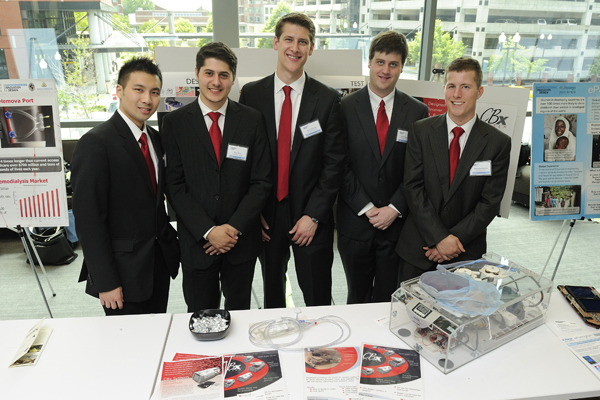 The TheraCord team—Christopher Chiang, Elias Bitar, James Waring, Sean Monagle and Matthew Means—with a prototype of their device for collecting stem cells. Attached to it is a fabric facsimile of a placenta and umbilical cord. Photo: Will Kirk/Homewoodphoto.jhu.edu

Johns Hopkins graduate students have invented a system to significantly boost the number of stem cells collected from a newborn’s umbilical cord and placenta, so that many more patients with leukemia, lymphoma and other blood disorders can be treated with these valuable cells.

The prototype is still in the testing stage, but initial results are promising. The student inventors have obtained a provisional patent covering the technology and have formed a company, TheraCord, to further develop the technology, which may someday be used widely in hospital maternity units. The students say that the need for this system is obvious.

“Cord blood, collected from the umbilical cord and placenta after live birth, is the most viable source of stem cells, yet over 90 percent is uncollected and discarded,” the team members wrote in a presentation of their project at the university’s recent Biomedical Engineering Design Day. “One of the main reasons valuable cord blood is so frequently discarded is because no adequate collection method exists.”

The students say that their easy-to-use invention, called the CBx System, could remedy these shortcomings.

When a baby is born, a few families pay for private collection and storage of the child’s cord blood, in case its stem cells are needed to treat a future illness. When families do not choose this option, the materials containing cord blood are generally thrown away as medical waste. But at the 180 hospitals affiliated with public cord blood banks, new mothers can donate cord blood so that its stem cells can be extracted and used to rebuild the immune systems of seriously ill patients, particularly those with blood cancers such as leukemia, lymphoma and myeloma.

According to the Johns Hopkins students, the current method of collecting these cells from cord blood doesn’t work well because it relies strictly on gravity. The National Marrow Donor Program says that about 50 percent of the units collected in this way contain enough stem cells to be stored for transplant use. Another organization, the National Cord Blood Program, says that only 40 percent of collected units meet transplantation standards. Even when the procedure is successful, the Johns Hopkins students said, the average collection yields only enough stem cells to treat a child but not enough to treat an adult patient, based on the recommended cell dosage.

To solve these problems, the students, who were enrolled in a master’s degree program in the university’s Center for Bioengineering Innovation and Design, spent the past year developing a collection method that uses both mechanical forces and a chemical solution to help detach and flush more stem cells from the cord and placenta blood vessels.

“This is important for two reasons,” said James Waring, a member of the student team. “First, we believe it collects enough cells from each birth so that stem cell therapy can be used on adult patients, who need more cells.”

In addition, in early testing on discarded cords and placentas at The Johns Hopkins Hospital, the team’s device collected up to 50 percent more stem cells than the traditional gravity system, the students said. “We think our system will increase the number of successful cord blood collections, meaning more patients overall will benefit,” Waring said.

Along with Waring, the student inventors were Elias Bitar, Christopher Chiang, Matthew Means and Sean Monagle.

While developing the system, the team entered its project in college business plan competitions, gathering recognition from judges and about $14,000 in prize money. After completing their academic program, the students recently received their master’s degrees. Chiang and Means have chosen to remain in Baltimore to manage and advance TheraCord over the coming year.

“Our next step,” Chiang said, “is to optimize the system so that it collects even more stem cells. Based on previous experiments using similar techniques, we believe it’s possible to get two to five times the amount produced by the existing gravity technique. The other important goal is to make the system as easy as possible for hospital employees to use.”

The students learned about the need for a better way to collect stem cells early in their master’s program when they accompanied physicians on hospital rounds to learn what new medical tools and devices were needed most urgently. Edith Gurewitsch, a Johns Hopkins School of Medicine associate professor of gynecology/obstetrics and biomedical engineering, first identified the clinical need for a better method to collect cord blood. Agreeing to be the student team’s clinical adviser, she provided guidance on both the clinical and workflow aspects of the device’s design. In the patent documents, Gurewitsch is listed as a co-inventor of the CBx System technology.