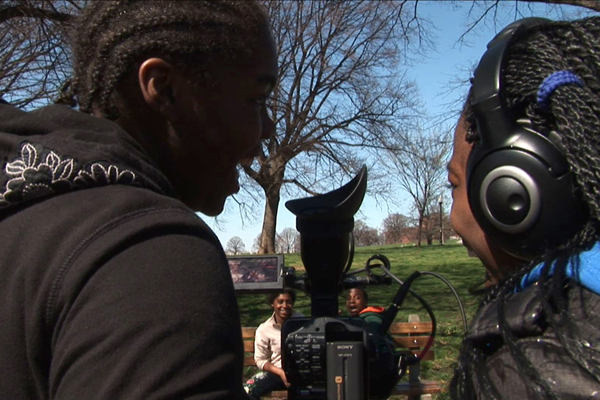 Baltimore teens in the Finding Our Wings community documentary program gather for filming in Patterson Park. A grant from the Johns Hopkins Urban Health Institute shored up the group’s finances during a slumping economy. Photo Courtesy Finding Our Wings

In the Finding Our Wings community documentary program, Baltimore teen girls record their journeys through high school and into womanhood—from exams and what not to wear to the prospects of college placement and unintended pregnancy.

The short, poignant documentaries tell an inner-city coming-of-age story through the lens of a pocket-size Flip or a professional camcorder. In one film, a girl talks of the loss of her mother to HIV; in another, a teen describes why she creates singing and poetry venues to raise funds for children with AIDS.

Co-founded by a Maryland Institute College of Art faculty member in 2006, the program features a small rotating cadre of students from six Baltimore high schools: Edmonson-Westside, Dunbar, Reach Academy, Carver Vocational, Frederick Douglass and Western. The project focuses on teaching video skills as a means to empower the girls and offer a forum for individual reflection. It also allows the participants to co-create a long-form documentary, to be screened at city high schools and film festivals, that captures the complexities of their journeys.

These stories might not have been told if not for a grant from the Johns Hopkins Urban Health Institute that kept the program running when its traditional funding dried up early last year.

Kirsten Hollander, the director of Finding Our Wings and a full-time professor at MICA, said that the slumping economy finally caught up with the project in 2010. Feeling the financial pinch, Hollander and Wings co-founder Jacquelyn Duval-Harvey, deputy commissioner for youth and families in the Baltimore City Department of Health and an instructor at the Johns Hopkins Bloomberg School of Public Health, applied for funding through the UHI’s Small Grants Program, formed in 2008 to stimulate and advance community-university collaborations around research and program development related to the health and well-being of Baltimore residents.

“This grant stabilized us and got us through a difficult period,” Hollander said. “The economy is tough, and finding philanthropical support these days is not easy.”

Since its founding, the Small Grants Program has awarded 33 grants totaling more than $205,000.

In 2010, the program funded 13 projects. In addition to Finding Our Wings, the grants helped finance efforts such as the Sail-Ability Program at the Downtown Sailing Center, which gave sailing sessions to eight inner-city youth.

Theresa Marshall, a graduate student at the Carey Business School and an avid sailor, applied for the grant with representatives of the Downtown Sailing Center and Mentor Maryland.

Marshall said that the program doesn’t just expose youth to the sport of sailing but offers holistic health benefits.

“Mental health is as important as physical health, and sailing transcends physical skills and can offer a Zen-like experience for these young people,” she said.

For Recovering a Sense of Place: Environment and Community in Treatment for Addiction, a $5,000 UHI grant went toward data collection and analysis. The ReSPECT project investigates how Baltimore residents perceive and respond to drug addiction and treatment in their community. The program identifies and recruits area residents to serve as artist-researchers who take photographs and conduct interviews in the Waverly and Oakenshawe neighborhoods. The aim of the effort is to provide key insights and novel methodology to more effectively address drug addiction and its treatment in Baltimore.

Robert Blum, director of the Urban Health Institute, said that the vision of the small grants program was to jump-start and support collaborations between community members and Johns Hopkins students and faculty—all for the betterment of Baltimore.

Students and faculty can team up with a community organization, for example, for a pilot study, to analyze existing data or to expand a program in a new direction. The grants, he said, have been used to spur innovation, keep programs moving forward and build bridges between Johns Hopkins and the community.

“The key to the program’s success is that we are working on issues that the community groups feel are critically important,” said Blum, who is also the William H. Gates Sr. Professor of Population and Family Health Sciences and chair of the Department of Population, Family and Reproductive Health in the Bloomberg School. “The community organizations and their needs drive our request for proposals.”

The grant proposals are reviewed and graded by both Johns Hopkins and community members. Only the projects that score highly and are supported by both parties are considered. UHI will not fund the same program twice.

Blum said that the initiative has clearly had a positive, meaningful impact, and that success and satisfaction are measured in terms of the grants contributing in some significant way to the project’s work, with evidence that some positive change has occurred.

He points to one funded project at the Baltimore City Health Department that looked into rates of sexually transmitted infections by neighborhood and zip codes. In this case, he said, the Johns Hopkins and community collaboration was able to determine that the outreach vans used by the city were not spending the majority of time where the needs were greatest.

For a project focused on health care for the homeless in Baltimore, Johns Hopkins grant recipients were able to adapt a methodology used to track North Korean migrants into China to identify young homeless persons, a traditionally hard-to-track-down population.

“These are just a few examples of our grants helping to maximize what is already going on,” he said.