Julie A. Freischlag is first woman named to post; on track for 2014 presidency 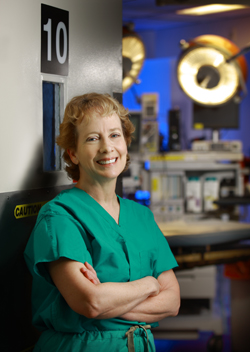 Julie A. Freischlag, the director of the Department of Surgery at the Johns Hopkins University School of Medicine and surgeon in chief at The Johns Hopkins Hospital, has been elected the first female vice president of the Society for Vascular Surgery.

The position puts her on the path to become the first woman to serve as the society’s president, in 2014.

“I am humbled and delighted to be elected to this position in such a prestigious organization,” said Freischlag, who is also the William Stewart Halsted Professor at Johns Hopkins. “The society is dedicated to improving the care of our vascular patients, enhancing our knowledge of vascular diseases and training the very best specialists to do both.”

Freischlag has been at Johns Hopkins since 2003. She received her medical degree at Rush University Medical College in Chicago and previously served on the faculty of the Medical College of Wisconsin and the David Geffen School of Medicine at the University of California, Los Angeles.

She has served as the principal investigator on several major studies, including the Open vs. Endovascular Repair of Abdominal Aortic Aneurysms Trial. Freischlag’s research interests lie in the treatment of abdominal aortic aneurysms and thoracic outlet syndrome.

“The Society for Vascular Surgery is excited to have Dr. Freischlag accept this important leadership role,” said Richard P. Cambria, the organization’s current president. “She is an accomplished surgeon and author who serves as an outstanding role model for females and males in the field of vascular health care.”