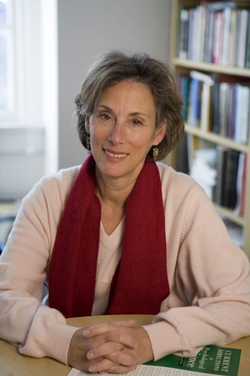 Barbara Landau, the Dick and Lydia Todd Professor and chair of the Department of Cognitive Science in the Krieger School of Arts and Sciences, has been appointed vice provost for faculty affairs. She succeeds Michela Gallagher, former chair of Psychological and Brain Sciences in the Krieger School, who stepped down as vice provost for academic affairs to return to her research.

As vice provost for faculty affairs, Landau will work closely with the vice deans for faculty in the respective schools and with faculty across the university to advance and promote their work and to improve the quality of faculty life. She assumed her new role on July 1.

“Barbara is a proven scholar and academic leader,” said Lloyd Minor, provost and senior vice president for academic affairs. “She is ideally suited to fill this important role, which has been refocused to address the most pressing issues of one our most important resources—our faculty. Barbara will be a wonderful addition to the Office of the Provost,” Minor said.

Landau, whose research focuses on the nature, acquisition and development of human knowledge of space and language, said that she will draw on experiences she has gained as a department chair, as well as strategies she has gleaned from fellow faculty members who have created programs to help their peers, to shape her new role and advance faculty interests.

“I am stepping into a role that although refocused from the position that Michela held is strongly shaped by her work over the past three years in the Provost’s Office,” Landau said. “The central goal of the new position is to support and enhance faculty excellence. This includes helping to improve the quality of faculty academic experience, enhancing faculty development efforts and increasing faculty diversity. Most of these activities have already undergone considerable development under Michela’s guidance, and it is a privilege to be carrying these projects forward.”

In assuming her new post, Landau said that she will divide her time between faculty affairs and her research lab. In addition to her work on language learning, spatial representation and the relationship between these two foundational systems of human knowledge, Landau is a noted authority on Williams syndrome, a rare genetic disorder caused by the absence of genes in a person’s chromosomal makeup. She joined the faculty in 2001 and became chair of Cognitive Science in 2006.

Landau becomes vice provost as Gallagher embarks on a yearlong sabbatical devoted to her study of the neuroscience of memory loss in the aging—groundbreaking research that could have profound implications in the treatment of Alzheimer’s disease.

Gallagher, a world-renowned neuroscientist who is the Krieger-Eisenhower Professor of Psychology and Neuroscience at Johns Hopkins, described her three-year term as vice provost as both exhilarating and taxing, and said that now is a good time for her to move on.

“I see this as an opportunity to concentrate on some important things we are doing in my lab, but I leave the position of vice provost with tremendous satisfaction,” Gallagher said.

Gallagher said that her objective as vice provost has been to make Johns Hopkins the best place to be for faculty because providing that climate is essential to attracting and retaining the most outstanding scholars, scientists and educators. Gallagher said that she is especially pleased with the substantive and more frequent engagement she has had with the vice deans of faculty across the schools during her tenure.

A faculty member since 1997, Gallagher served as interim dean of the Krieger School prior to the appointment of Katherine Newman in September 2010. Much of her cross-disciplinary research is focused on the aging brain and the changes that can lead to memory loss, cognitive impairment and, eventually, Alzheimer’s and other forms of dementia.