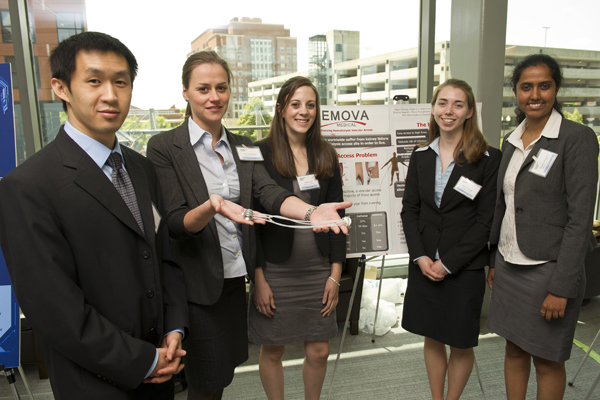 A device that could reduce key health risks facing kidney-failure patients who are connected to dialysis machines has won a $10,000 first prize for Johns Hopkins graduate students in the 2011 ASME Innovation Showcase.

The competition, involving 10 collegiate teams, was conducted earlier this month in Dallas at the annual meeting of the ASME, founded in 1880 as American Society of Mechanical Engineers. Judges based their awards on technical ingenuity, quality of business plan, potential for success in the marketplace and other factors.

The top prize went to the Hemova Port, a device designed to be implanted beneath the skin in a leg, allowing a kidney-failure patient to receive blood-cleansing dialysis treatment with reduced risk of infection, clotting and narrowing of the blood vessels, the three most common problems linked to existing connection techniques. The prototype has not yet been used in human patients, but testing in animals has begun.

With help from the Johns Hopkins Technology Transfer staff, the team has filed for three provisional patents covering their technology. The patents list the five students and three of their medical faculty advisers as the inventors.

The team members recently graduated, but Li has remained in Baltimore to form a company that will continue to test and develop the project. He is joined in the endeavor by Brandon Doan, who represented Hemova in the ASME competition. Doan earned a Johns Hopkins undergraduate degree in biomedical engineering and is now enrolled in an engineering management master’s program. Li and Doan will manage the company’s daily operations, while the other four student inventors will serve as consultants and could benefit financially if the project advances.

“Winning first-place in the ASME competition is a great honor,” Li said. “The award and the recognition will go a long way toward helping to continue further research, and we hope it will bring us closer to the day when our device is available to help dialysis patients.”

The student inventors learned about the need for such a device last year while accompanying physicians on hospital rounds as part of their academic program. They watched as one doctor performed a procedure to open a narrowed blood vessel at a kidney patient’s dialysis access site. They learned that this narrowing was a common complication facing kidney patients.

The students discovered that kidney failure each year requires 1.5 million people globally—350,000 of them in the United States alone—to undergo regular hemodialysis to prevent a fatal buildup of toxins in the bloodstream. The students also learned that the three most common ways to connect the machine to a patient’s bloodstream work for only a limited time because of problems with infection, blood clots and narrowing of the blood vessels. According to the students’ business plan, these current dialysis access options are “grossly inadequate,” contributing to increased health care expenses and, in some cases, patient deaths.

To address these problems, the students developed an access port that can be implanted beneath the skin, reducing the risk of infection. The Hemova device is equipped with two valves that can be opened by the dialysis technician with a syringe from outside the skin. The technician can similarly close the valves when the procedure is over, an approach that helps avoid infection and clotting. The device also includes a simple cleaning system, serving as yet another way to deter infections.

Currently, most dialysis access sites are in the arm or the heart. The Hemova device instead is sutured to the leg’s femoral vein, avoiding the unnaturally high blood flows that cause vessel narrowing when dialysis machines are connected to veins and arteries in the arm. The student inventors say that the Hemova Port’s leg connection should allow the site to remain in use for a significantly longer period of time.

The Hemova team has applied for a $50,000 grant to conduct more animal testing in the coming months. Clinical trials involving human patients could begin as soon as 2013, the students said.