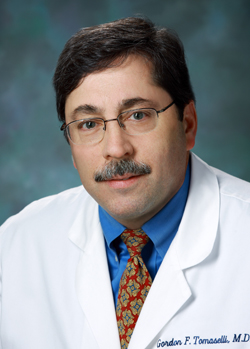 Gordon F. Tomaselli, professor and director of the Division of Cardiology at the Johns Hopkins University School of Medicine, became president of the American Heart Association, the nation’s leading voluntary health organization focused on cardiovascular disease and stroke, on July 1.

Tomaselli is the seventh Johns Hopkins faculty member to serve as president of the AHA. A cardiac electrophysiologist and internationally recognized expert in sudden cardiac death and heart rhythm disturbances, Tomaselli is the Michel Mirowski, M.D., Professor of Cardiology and co-director of the Johns Hopkins Heart and Vascular Institute.

Edward D. Miller, the Frances Watt Baker, M.D., and Lenox D. Baker Jr., M.D., Dean of the Medical Faculty and CEO of Johns Hopkins Medicine, said, “This is a tremendous honor for Dr. Tomaselli and Johns Hopkins. It underscores his contributions and role as a world leader in the study of the causes and potential therapies to prevent sudden cardiac death.”

“Dr. Tomaselli is building on a strong personal and professional history of active involvement with the American Heart Association and carrying on the finest traditions of Hopkins cardiology in offering global leadership and insight to millions of professionals, volunteers, patients and their families affected by cardiovascular disease,” said fellow cardiologist Myron “Mike” Weisfeldt, professor and chairman of the Department of Medicine at the School of Medicine, and physician in chief at The Johns Hopkins Hospital.

Weisfeldt, a past president of the American Heart Association (1989–90), added, “I take great pride in seeing the torch of the AHA leadership passed to such a distinguished physician-scientist, colleague and friend.”

In 2007 and 2008, Tomaselli served as program chair for the American Heart Association’s Scientific Sessions, the world’s premier conference for cardiologists. He is currently chairman of the association’s 2010–2013 Strategic Planning Task Force. Tomaselli also remains an active member of the American College of Cardiology and the Heart Rhythm Society.

Tomaselli has focused most of his research on arrhythmias and especially on new therapies aimed at warding off potentially fatal heart rhythm disturbances, which claim the lives of more than a quarter million Americans each year. He has published more than 150 peer-reviewed research articles and many book chapters on various aspects of arrhythmia.

Tomaselli earned his undergraduate degree in biochemistry and chemistry in 1977 at the State University of New York at Buffalo and his medical degree in 1982 at Albert Einstein College of Medicine. He completed his residency at the University of California, San Francisco in 1985. He began his career in cardiology at the UCSF Cardiovascular Research Institute as a research fellow before moving to the fellowship program at the Johns Hopkins University School of Medicine in 1986 and joining the faculty three years later. He has received numerous awards, has served on a variety of boards and committees, and was president of the Cardiac Electrophysiology Society from 2003 to 2005.