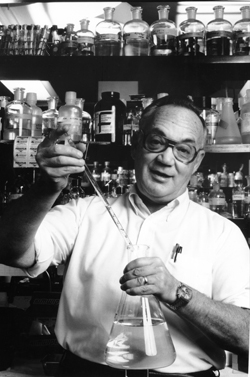 Saul Roseman, an emeritus professor who taught and conducted research for 46 years in the Department of Biology in the Krieger School of Arts and Sciences, died July 2 of congestive heart failure. He was 90.

Roseman came to Johns Hopkins in 1965 and was named the Ralph S. O’Connor Professor of Biology in 1975. He served as chair of the department from 1969 to 1973 and from 1988 to 1990. Fundraising efforts initiated by Roseman during his first tenure as chairman resulted in the construction of many of the department’s buildings and facilities.

Roseman made many seminal discoveries in the field of biochemistry and published hundreds of original research papers and reviews, prompting The Journal of Biological Chemistry to honor him in 2006 for a lifetime of contributions to the field.

“[Roseman’s] time here as a biology professor was nothing short of prolific,” Katherine Newman, dean of the Krieger School, told The Baltimore Sun. “Saul loved coming to the lab every day, and that enthusiasm inspired his students and his colleagues alike.”

Friends, colleagues and collaborators knew the longtime professor as “The Prince of Serendipity,” a nickname earned in the 1950s, when he was beginning his career as an assistant professor of biological chemistry at the University of Michigan Medical School, according to a Johns Hopkins Gazette story published in June 2001, when a symposium was presented in his honor.

While looking for one thing, Roseman had made a serendipitous discovery, unexpectedly finding something else that also was very valuable.

During his study of an enzyme that metabolizes sialic acid, a sugar that is an important component of biologically active carbohydrates, Roseman stumbled upon a major error made by two previous research groups, one of which included two Nobel laureates. The researchers had previously announced that they had determined the structure of sialic acid, but Roseman found that there was a major error in the proposed structure.

Other assistant professors might have flinched at challenging not one but two Nobel laureates, but Roseman stood firm. And he was eventually proved correct.

Roseman told The Gazette that finding the unexpected is just Nature’s way of telling researchers where to look for the really interesting and important stuff, and that serendipity is simply a tool of the trade.

“As far as I’m concerned, serendipity is a major tool of scientific investigation, and many, many major discoveries in biology and medicine have come through it,” Roseman said. “Take the human brain, for example. We think there’s about 100,000 different types of enzymatic reactions that take place in the human brain. When you start from scratch looking for something in that, the chances that you’re going to find what you’re looking for are pretty low.”

“It is hard to imagine our department without Saul,” said Beverly Wendland, chair of Biology. “He was such a presence, always sitting in the front row at seminars and always asking questions of the speakers. In recent years, he was very excited about a process he had patented to convert lobster shell chitin into useful and valuable products. I hope that this patent will be licensed and become yet another legacy of Saul’s serendipity.”

Saul Roseman was born in 1921 in Brooklyn, N.Y., and his father died when he was a child, leaving the family in poverty, according to The Sun. As an undergraduate at City College of New York, he majored in chemistry and minored in both biology and physics.

“He was a poor kid, the son of immigrants,” his son-in-law, Ronald Schnaar, a professor at the Johns Hopkins University School of Medicine, told The Sun. “He was very bright in school and skipped grades and was often the youngest in his class. But he had a passion for knowledge.”

After earning a master’s degree in biochemistry from the University of Wisconsin, Roseman was an infantryman from 1944 to 1946, serving in World War II. To earn his PhD in biochemistry, he returned to Wisconsin, where Newman said that he “discovered his lifelong interest in the field he would one day help to define as glycobiology,” the study of carbohydrates in living systems.

Throughout his career, Roseman received many awards and honors, including election to the National Academy of Sciences and an honorary medical degree from the University of Lund in Sweden. He remained active as a researcher and teacher throughout his time at the Homewood campus.

“I’m actually more productive now than I ever was,” Roseman told The Washington Post in 1994, when he was 72 and was asked about the government-mandated end to colleges’ forced retirement policies. (The story says that Johns Hopkins eliminated mandatory retirement in 1986, seven years before the exemption for colleges expired.) “I’m pulling my own weight. Why should I be supplanted?”

Funeral services were held July 5, and the Department of Biology plans to hold a memorial on campus in the fall.