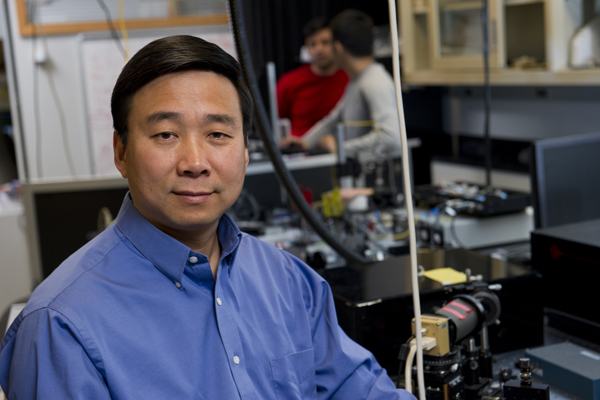 Xingde Li is one of 12 Hartwell Investigators selected nationwide in 2010. Photo: Will Kirk/Homewoodphoto.jhu.edu

More than a half million babies are born every year in the United States before reaching 37 weeks in the womb. For those who survive preterm birth—the leading cause of death for newborns—it often means months, years or even a lifetime full of complications for both the babies and their families.

If doctors could predict preterm birth during pregnancy, they could help mothers take measures to prevent early delivery and the issues that accompany it, ranging from low birth weight to a higher risk for learning and developmental disabilities. But more than half of these premature births occur without any known risk factors, and currently no effective clinical methodologies exist to predict them.

“When I started reading about preterm birth, I thought, Gosh, this is probably as bad as cancer,” said Xingde Li, an associate professor of biomedical engineering at the Johns Hopkins School of Medicine. “Thirty years ago, the statistics were down to just 9.7 percent of births in the United States, and now they’re at 12.7 percent. We don’t know the exact reason; maybe we’re under more stress in modern days. It’s a very significant clinical problem.”

Li is now working toward a solution. He received a 2010 Hartwell Foundation Individual Biomedical Research Award to develop a small, flexible, high-resolution fiber-optic endomicroscope that physicians would use to examine cervical collagen during prenatal exams and predict preterm birth.

Researchers recently discovered that the structure of collagen fibers in the cervix changes over the course of normal pregnancy, and that certain changes are associated with preterm birth. Changes in cervical collagen were observed in mice using a 20-year-old laser imaging technology called second harmonic generation, or SHG, microscopy. Currently, the only way to monitor cervical collagen structure in humans is with a tissue biopsy. However, this method can trigger early delivery and thus cannot be the standard of diagnosis for preterm birth. While studies indicate that the SHG technique could work, the technology now requires a bench-top microscope about the size of a mini-refrigerator, far too large to be used in real-world situations.

To address this clinical need, Li proposes to develop an endomicroscope that can provide high-resolution images of the cervical collagen without the need for a biopsy. Obstetricians would be able to use the imaging technology in prenatal exams to identify risk for preterm birth.

“The underlying principle is that the cervical tissue mechanical rigidity is directly related to preterm birth possibility,” Li said. “Our goal is to develop a technique that can detect the collagen fiber network structure in a quantitative way. If we can tell an expecting mother that she is at a high risk for preterm birth, she can be encouraged to take bed rest, reduce stress and make other lifestyle changes,” he said. “If this technology really works, we are going to help prevent preterm births.”

The Hartwell Foundation seeks to stimulate discovery and foster transformative approaches in early-stage biomedical research that will benefit children of the United States. Li was selected as one of just 12 awardees of the 2010 competition. He will receive $100,000 in support each year for three years. (For information about the 2011 competition, see box.)

Fred Dombrose, president of The Hartwell Foundation, said, “If Li is successful, his innovation will provide not only a powerful diagnostic tool ready for clinical translation to predict preterm birth but the ability for the first time to develop new therapeutics to intervene and manage the disorder.”

Li has been working on imaging research for some time, particularly with cancer. He began working on prevention for preterm births in fall 2009, after another Hartwell Investigator reached out to him to discuss the potential for application of the SHG technology.

But he also has a personal connection to the issue. Li’s older sister was born prematurely, leading to heart complications that forced her to retire in her early 40s. The son of a close friend also was delivered preterm, and his development initially lagged behind other children’s.

“But at this point, it goes beyond that,” Li said. “When I read about preterm birth, I realized it is a much bigger problem than I thought and a serious national issue.”

The Hartwell Foundation each year selects 10 research institutions to participate in its grant competition. In 2010 it extended an invitation to Johns Hopkins to nominate four faculty researchers to submit proposals for the Individual Biomedical Research Award, an invitation Johns Hopkins has received and accepted every year since the awards program began in 2006. Researchers from Johns Hopkins have been named Hartwell Investigators in each of the past five years.

The Hartwell Foundation also recognizes research institutions that fully participate in the nomination process with funding for a Hartwell Fellowship, which supports one postdoctoral fellow of their choice in an area of biomedical science. The award supports scientists in the early stages of biomedical research careers by enabling them to pursue further specialized training as part of their career development.