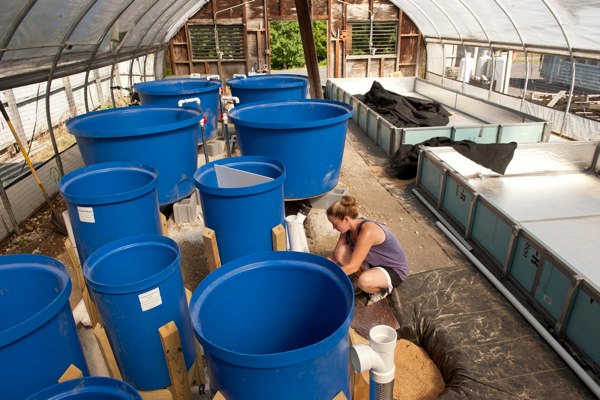 Shelly White plumbs the smaller tanks that will be used for clarifying the fish wastewater and for converting the suspended waste into a slurry to be used for plant food. About 320 tilapia will be housed in the larger tanks behind them. Photo: Will Kirk/Homewoodphoto.jhu.edu

There’s something fishy going on at Baltimore’s Cylburn Arboretum, and the results could be delicious—and sustainable.

Earlier this summer, David Love, a microbiologist and project director with the Center for a Livable Future at the Johns Hopkins Bloomberg School of Public Health, began work on a demonstration aquaponics farm housed in a greenhouse at Cylburn, a nature preserve located in north-central Baltimore.

Aquaponics, a relatively new and unknown sustainable food production system, is the merger of aquaculture, or fish farming, and hydroponics, soil-less plant farming. The system utilizes fish wastewater as a resource by circulating it through hydroponic grow beds, where plants uptake the waste as their primary nutrient source. In the system, a symbiotic relationship is formed between fish and plants, with fish providing most of the required nutrients for the plants, and the plants in turn cleaning the water for the fish.

Love, an assistant scientist with the Bloomberg School’s Department of Environmental Health Sciences, set out to determine whether aquaponics is a sustainable form of urban agriculture that can be replicated on a larger scale. He thought, Why not have Baltimore be a testing ground?

“I wanted to get folks in Baltimore excited about alternative urban farming ideas,” Love said. “Urban farming is really taking off in Baltimore; you just have to look at the corner lots and odd spaces that people are using to grow food.”

Love said that he also wanted to highlight a sustainable way to raise fish. “I don’t want aquaculture to be left behind,” he said. “You hear a lot in the news about us eating all the fish in the sea, and we’re gradually reaching that point. Inevitably, we have to turn to aquaculture to meet the growing human need and desire to eat fish.”

Currently, the bones of the farm are in place. The system consists of four 250-gallon royal blue tanks for the fish, a filtration system made up of six smaller blue tanks and two 18-by-8-foot grow beds. It’s all housed in a greenhouse that up until this spring Baltimore City used as a storage space. Love and a CLF summer intern, Shelly White, a graduate student from Michigan State University, spent part of the spring cleaning out the space and leveling the ground and are now setting up the system.

Later this month, when the plumbing connections are complete, Love and White will introduce the fish, tilapia. Roughly 80 fish will be housed in each tank. The fish wastewater will be pumped into the four clarifier tanks, where solid waste can be flushed out of the system to be later used for compost. The remaining suspended waste then goes into a mineralization tank, where beneficial bacteria will be added to convert the water into a slurry that the plants can use as food.

This slurry then passes through a degassing tank before being pumped into the grow beds. Styrofoam rafts seeded with vegetable plants will float, and grow, on 1-foot-deep, nutrient-rich water.

Love plans to attempt first to cultivate leafy vegetables such as lettuce, kale, bok choy and spinach. Later, when the water “ripens,” Love said he will try to grow other vegetables, including tomatoes and squash.

The tilapia used will be an all-male cohort staggered in size, and rotated into different tanks as they grow. The largest adult fish will be harvested every six months, with a new batch of juvenile fish added.

This aquaponics system will recycle the water, and Love hopes to achieve 99 percent water recovery. “That would be great,” he said. “There will be some evaporation, but otherwise the water will just recycle through with little to be added.”

Sounds good, so what’s the hitch?

Love said that the big question mark for a system like this is heating cost, and whether the cost can be kept down to make it economically feasible and sustainable.

“How are we going to keep the water warm in the winter and the environment cool in the summer? Greenhouses are typically a two-season environment in a climate like this, so we’ll have to keep careful track of how much energy we use. There’s a specific food-to-energy ratio we have to determine,” he said. “Will the cost of keeping these temperatures make it all worthwhile? We have to find out.”

The farm equipment and supplies were purchased using CLF program funds. The greenhouse will be used on loan from the Baltimore City Department of Parks and Recreation.

Once operational, likely later this summer or in early fall, the farm will be open to the public for educational purposes. The farm will also be used as a research site for faculty and student volunteers.

“I always envisioned a strong educational component to this project,” he said. “Here we have this polyculture system of fish, plants and bacteria: three different systems working together and supporting each other. I see lots of opportunities for teaching in the areas of biology, ecology and farming.”

The food harvested, both the fish and vegetables, will likely be donated to local food distribution centers for possible use at homeless shelters.

Love said that the work this summer has been a labor of love.

“Shelly and I are out here most every morning building and troubleshooting,” he said. “It’s been a lot of fun and rewarding as we watch this project mature.”

To keep up with the project’s progress, go to the Center for a Livable Future’s website or to Cylburn Aquaponics Farm’s page on Facebook.