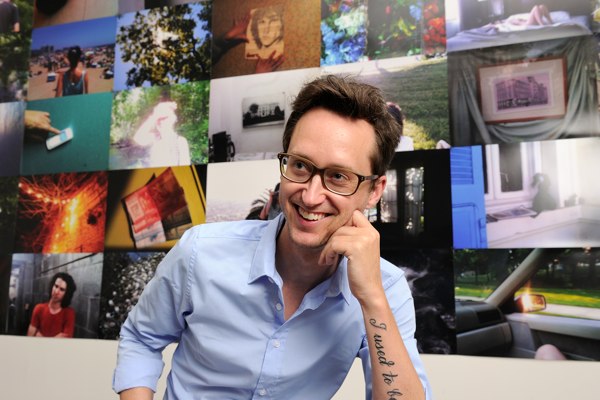 Matthew Porterfield, an instructor in the Johns Hopkins Film and Media Studies program, and his Sondheim Prize–winning piece called ‘Days are Golden Afterparty.’ Photo: Will Kirk/Homewoodphoto.jhu.edu

In a large box-shaped gallery inside the Baltimore Museum of Art, independent filmmaker Matthew Porterfield paces before an audience of admirers, fielding questions about his latest creative work, winner of Baltimore’s $25,000 Janet & Walter Sondheim Artscape Prize.

In recent years, Porterfield, who teaches in the Krieger School’s Film and Media Studies program, has collected critical acclaim for his films Hamilton and Putty Hill, both set in Baltimore. But the prize-winning exhibit on view this day is a different type of artistic work, one assembled from dozens of photos that Porterfield had snapped on his cell phone over the past year or two.

On the museum wall behind him, enlarged prints of 72 cell phone photos are arranged in a massive rectangular grid. The images, some enhanced with photo-editing software, include quirky shots of friends, pets, loved ones, landscapes and everyday objects such as a soup bowl. Some prints depict exotic locations in other countries where Porterfield, 33, had been invited to screen his movies.

With so many varied images adorning the museum wall, each visitor can select a favorite. Porterfield says that his grandmother is most fond of a playful shot of the artist’s two cats. Porterfield himself is partial to a shadowy shot of his father walking through a narrow alley.

“I think of myself as a filmmaker, and I found my way to film through my love of photography and theater,” he tells the audience. “This time I wanted to challenge myself to push the boundaries of what I do. There was something personally powerful about these images.”

He describes his exhibit, on view at the museum through Aug. 7, as “a way to celebrate the everyday.”

The second, smaller part of his artistic creation hangs on the wall opposite the picture grid. It is a video screen, flashing a minute-long loop of his cell phone photos. The images speed by at 24 frames per second, a pace so furious that an onlooker’s eyes are fooled into thinking that some of the images are blended together like double exposures. “Something in the video is psychedelic,” Porterfield says, “not in a chemical way but in an exalted way.”

The photo prints and “flicker film,” together dubbed “Days are Golden Afterparty,” impressed the judges and led them to award this year’s Sondheim Prize to Porterfield. The prize, now in its sixth year, is a $25,000 fellowship presented to a visual artist living and working in the Greater Baltimore region. It is given in conjunction with Artscape, the city’s free festival of the arts.

“I was shocked. I was preparing to hear someone else’s name,” he says during an interview after the museum lecture. “The first thing I thought about was a sense of validation. I took a risk and was competing with other artists whose work I respect. This win made me feel that I took some pictures that these people recognized as remarkable. That was very cool and affirming.”

The prize money was welcome as well. Porterfield’s bank account is not exactly bursting at the seams. For years, he supported himself as a waiter and a kindergarten teacher, and his teaching job in the Krieger School has been a part-time post. The only camera he owns, Porterfield says, is the one in his cell phone.

Like most independent filmmakers, he must scramble to raise funds for his projects. Even though his films cost a fraction of the typical Hollywood fare, the expenses for a crew, equipment rentals, food, location fees and post-production processing mount up.

Porterfield says that if the $25,000 Sondheim Prize had been awarded in a lump sum instead of in yearlong installments, “it would all go into this movie.”

“This movie” is Porterfield’s next film, which begins shooting this month in Baltimore and Ocean City. Its title, “I Used to Be Darker,” refers to the characters’ emotional state, he says, and Porterfield himself recently had the phrase tattooed on his left arm. The movie’s 94-page script focuses on a husband and wife, both musicians, whose marriage is unraveling. The couple’s 18-year-old daughter and a troubled niece are the other key characters.

Porterfield expects the movie to cost about $250,000. To offset some of that expense, he’s set up a website to raise money from fans and supporters. While moving ahead with the new film, Porterfield is also eager to see his first two movies released on DVD in November.

He also is looking forward to resuming his teaching duties at Johns Hopkins. This fall, Porterfield will begin his fifth year in the Film and Media Studies program, his first as a full-time instructor. He teaches production, screenwriting and theory.

“We have an amazing group of majors in this program,” he says. “I find that the Hopkins students who want to major in film or do a minor in it are phenomenal. They’re very self-motivated and hard-working.”

Porterfield has also been impressed by the number of science and engineering majors who take his film classes because they see possible new media applications in their own fields. “That’s really exciting,” he says.

Although he enjoys teaching, Porterfield’s primary goal is to continue exercising his own creative muscles, particularly in his hometown. “There’s a really healthy cultural and arts scene in Baltimore,” he says. “I want to continue to live and make movies here. I’m just inspired by the city. There are so many stories to tell that I plan to stay here.”