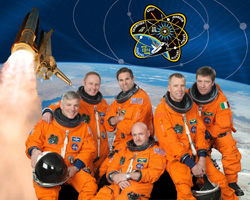 Members of the last crew to fly aboard the space shuttle Endeavour, the second-to-last flight in NASA’s space shuttle program, will discuss their 16-day June mission to the International Space Station from 6:30 to 9 p.m. on Thursday, Aug. 4, on the Homewood campus.

The event, presented by the Maryland Space Grant Consortium and NASA, will take place in Schafler Auditorium in the Bloomberg Center for Physics and Astronomy. The crew will give a video presentation about the mission and answer questions from the audience. The event is free and open to the public.

STS-134 was the second shuttle mission of 2011 and the last flight for Endeavour. Its mission was to deliver the Alpha Magnetic Spectrometer-2—a particle physics detector that searches for various types of unusual matter by measuring cosmic rays—to the space station. Experiments with AMS are helping astrophysicists study the formation of the universe and search for evidence of dark matter, antimatter and strange matter. The mission also flew the Expedite the Processing of Experiment to Space Station (Express) Logistics Carrier 3, a platform that carried spare parts that will sustain space station operations now that the shuttles have been retired from service.