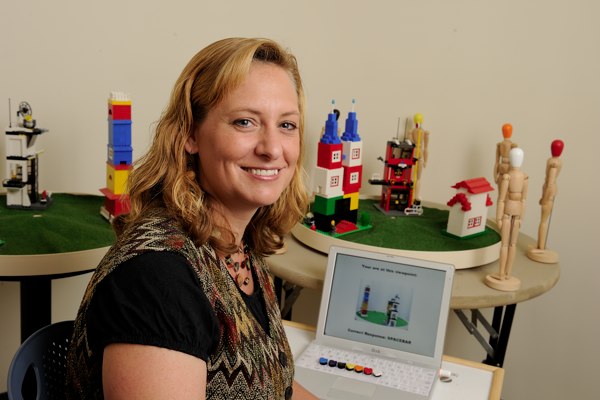 On the table behind Amy Shelton are the figures and Lego buildings she used to test study participants’ ability to assume others’ spatial perspective. Photo: Will Kirk/Homewoodphoto.jhu.edu

People who are socially skilled—who are adept at metaphorically putting themselves in someone else’s shoes—are also more proficient when it comes to spatial skills, according to a new study led by a Johns Hopkins University psychologist.

The study, published online July 27 in Journal of Experimental Psychology, found that the more socially accomplished people are, the easier it is for them to assume another person’s perspective (literally) on the world.

“The results were striking: There was a profound difference in this ability among people with better social skills and those with weaker ones,” said study leader Amy Shelton, a professor in the Department of Psychological and Brain Sciences in the Krieger School of Arts and Sciences.

Shelton said that the study results could eventually lead to improved strategies to help people on the autism spectrum—notable for their lack of social awareness and skills—compensate for this weakness.

In the study, 48 men and women ages 18 to 22 viewed building models constructed from Legos. A series of seven figures (one time it was 13-inch faceless “dolls,” a second time it was toy cameras, and a third time it was colored plastic triangles) was arrayed around the buildings. Participants then viewed images on laptop computers, each of which corresponded to the would-be visual perspective of one of the figures (dolls, cameras, triangles) and were asked which figure could “see” that view of the buildings displayed on the computer screen.

The study subjects also completed a pencil-and-paper test designed to assess the degree to which adults of normal intelligence showed five different traits associated with autism spectrum disorders: social skills, perseveration, attention to detail, communication and imagination. Of particular interest in this inquiry were the social and communication scores, as those are aligned with typical social behaviors, Shelton said.

According to Shelton, this suggests that when people are faced with a task involving taking a different perspective, they “bring something extra to the table when it involves a person, or a potential person, rather than just an object.

“Perhaps the human figures allowed the study subjects to more readily embody the other person and take that ‘person’s’ perspective in this task,” she speculated. “The current thinking on this is that this ‘embodiment’—this ability to take another’s position—should be universally helpful, because it’s what we do as social beings: We put ourselves in another person’s place. Yet our results indicate that this embodiment is only helpful if one is actually socially savvy to begin with.”

According to Shelton, these results suggest that a person’s ability to take another person’s spatial perspective may be related to such things as empathy, or even tolerance for another’s belief system.

“Perhaps the most exciting aspect of this research is that it emphasizes a ‘whole person’ approach,” she said. “We tend to think of ourselves as being either ‘good’ or ‘bad’ at certain skills, but these results suggest that different skills really do interact and have an impact on each other. For instance, I might be good at giving directions to another person because I have good spatial skills, but I might be even better at it if I can also empathize or embody the other person’s perspective.”

This study was funded by a Woodrow Wilson Center Fellowship.