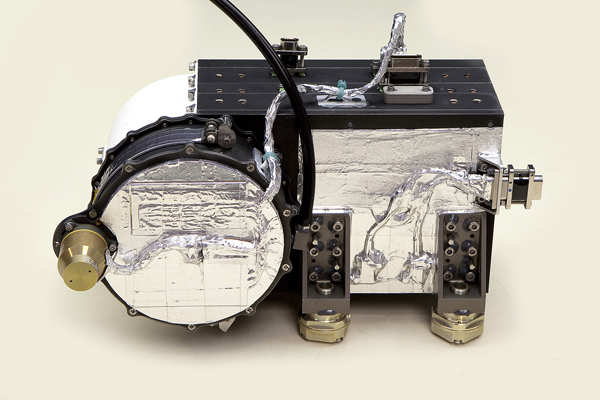 NASA’s Juno spacecraft, set to arrive at Jupiter in 2016, carries three APL-built Jupiter Energetic-particle Detector Instrument units. Each JEDI unit weighs 15.5 pounds and uses 7 watts of power. The box that contains electronics and the sensor is approximately 9-by-5-by-5 inches; the circular “hockey puck” detector itself is 4 inches across and 1.78 inches deep. Photo: APL

A Johns Hopkins University Applied Physics Laboratory instrument that will delve into the dynamics of the solar system’s largest planetary magnetic field was launched Aug. 5 aboard NASA’s Juno spacecraft.

The Jupiter Energetic-particle Detector Instrument, or JEDI, will measure energetic particles that flow through and are trapped within Jupiter’s space environment, called a “magnetosphere,” and study how those particles interact with Jupiter’s swirling atmosphere. That interaction generates Jupiter’s bright northern and southern lights, called aurora, the most powerful in the solar system. JEDI findings will contribute to Juno’s overall mission to find out more about the gas giant’s origins, structure, atmosphere and magnetosphere.

“Because the processes operating within Jupiter’s space environment are so powerful, we must study the planet to make the connection between such Earth-space phenomena as auroras, radiation belts and magnetic field dynamics, and similar astrophysical processes elsewhere in the universe,” said Barry Mauk, JEDI lead investigator at APL.

Juno, which launched at 12:25 p.m. aboard an Atlas V rocket from Cape Canaveral Air Force Station, Fla., will reach Jupiter in 2016 and circle over the planet’s poles for a year. One of nine instrument packages on Juno, JEDI consists of three shoebox-sized fast-processing electronic detectors positioned to provide a continuous 360-degree sampling view of the space around Juno. The sensors will work with other Juno magnetospheric instruments to investigate Jupiter’s polar space environment. Scientists are looking for how such a strong magnetic field, thought to be generated deep within the pressurized hydrogen interior of Jupiter, combines with other unique elements of Jupiter’s extended magnetosphere to spark the auroras.

“JEDI’s sensors will be trained on the higher-energy particles that help to generate Jupiter’s aurora, that heat and ionize Jupiter’s upper atmosphere and that offer clues to the structure of Jupiter’s near-planet space environment,” Mauk said. “We really want to know what happens in the aurora that causes these particles to accelerate to such high energies, and Juno will be the first spacecraft to fly within the region where this acceleration actually takes place.”

APL has built 64 spacecraft and approximately 200 space instruments over the past five decades, including other Jupiter-observing particle instruments. The Low-Energy Charged Particle Detector on Voyager 1 was key to the discovery of charged particles around the giant planet. Measurements from the Energetic Particle Detector on the Galileo spacecraft were critical to determining many of the fundamental processes operating within Jupiter’s magnetosphere. The Pluto Energetic Particle Spectrometer Science Investigation instrument, flying past Jupiter on the Pluto-bound New Horizons spacecraft, gathered data indicating that the dynamics of Jupiter’s magnetosphere, driven by the large amounts of volcanic material from its moon Io and by coupling to Jupiter’s rapid spin, extend millions of miles away from Jupiter within the cometlike tail of the planet’s magnetosphere.

More information about the Juno mission is online at www.nasa.gov/Juno and missionjuno
.swri.edu.