New service comes as a response to a student survey 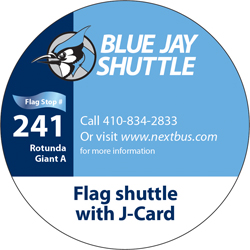 A significantly revised and enhanced shuttle service at Homewood is ready for liftoff.

Effective Aug. 24, the Blue Jay Shuttle service will operate on a new fixed-route evening schedule in an area proximate to the Homewood campus.

Under the new system, the fleet of vans will depart from Mason Hall—seen as the shuttle’s transportation hub—starting at 5:45 p.m. The vans will leave at 15 and 45 minutes after the hour and service five set routes within a limited area surrounding the Homewood campus. The color-coded routes include 72 marked “flag stops”—safe passenger loading zones—at selected university-owned buildings, off-campus residence halls and commercial/retail locations.

In addition to a circular route around the Homewood campus, the vans will travel to the nearby neighborhoods of Charles Village, Hampden, Waverly, Remington, Keswick and Wyman Park, hitting such spots as The Rotunda shopping center, the Meadow Mill Athletic Club and Woodberry Light Rail stop, the Safeway and CVS on North Charles Street, “The Avenue” in Hampden, the Waverly Giant, the new Fresh & Green’s supermarket on 41st Street and other retail establishments.

Although designed for students at Homewood, Johns Hopkins affiliates with a valid J-Card can also use the system.

Previously, the Blue Jay Shuttle operated on a demand-based point-to-point approach. The free service, formerly known as the Homewood Security Escort Van service, would pick up and drop off students from campus and other locations within a mile radius of the Homewood campus from 5 p.m. to 3 a.m. Since April, the shuttle has been operated by Broadway Services and overseen by the university’s Office of Parking and Transportation.

The shuttles can be tracked via NextBus, the GPS-based real-time transit information system available online or through a mobile device. (Starting today, the Homewood-JHMI buses will also be tracked by NextBus.)

Greg Smith, an associate director in the Office of Facilities Management, said that the new mode of service comes in response to a student survey conducted last fall. The survey found that shuttle users were somewhat frustrated with wait times and with not knowing precisely when a van was coming, said Smith, who is responsible for Homewood Parking and Transportation.

“It was literally operated like a taxi service, and the feedback we got from that survey was that students wanted the Blue Jay Shuttle to be run more like the Homewood-JHMI shuttle, on a schedule with defined routes and defined times,” Smith said.

William Smedick, director of leadership programs and assessment initiatives for the Office of the Dean of Student Life, said that the new fixed-route system is a great addition to student life and an urban campus like Johns Hopkins’.

“The changes and enhancements implemented by our transportation services definitely address the concerns that have been articulated by our students and reinforced by the survey,” he said. “The NextBus system is designed technology that students can access through their smart phones, tablets and personal computers, and provides real-time information that should help students get to where they need to go in a more time-efficient manner. The new Blue Jay Shuttle should add consistency to the routes so that our students can be much more confident in terms of arrival and departure times.”

In addition to driving along fixed routes, the fleet of 10 vans will have a new look. Each van will be painted blue and white and festooned with a large image of the Johns Hopkins Blue Jay. Signs on the side of each van will identify the route by name. Each designated location will be marked with a sign giving the stop’s name and number.

From 11:15 p.m. to 2 a.m., the Blue Jay Shuttle will revert to the on-demand point-to-point service to and from locations within its service area. The service will operate on a limited basis, with only one van in use, from 2 to 4 a.m. For all demand-response service, passengers will be provided with a van number and estimated time of arrival for pickup.

To flag a Blue Jay Shuttle, passengers are instructed to be at a designated stop and hold up a J-Card, required each time when boarding a van. Drivers are instructed not to deviate from their fixed route except in the case of emergency or disability.

Passengers may have to transfer to another van to complete a trip to their destination, but the fixed routes have been designed to limit the need for transferring, Smith said.

“All the shuttle stops will be clearly marked, and we designed the routes in such a way that nobody should have to walk more than two blocks or so to get to the nearest stop,” Smith said. “If for some reason the students do have to walk more than a few blocks, they can call us to request a ride to the Mason Hall hub or the nearest stop. We’re still honoring the original intent of this shuttle service: offering a safe ride home.”

Smith said that supervisors will be present at Mason Hall and other locations to assist passengers in finding the appropriate van.

Nick Trenton, one of the Student Government Association representatives who worked with Smith on developing the route service, said, “It’s exciting that things are happening so fast. I remember working on the student opinion survey of the shuttle service last fall, and thinking that it would take ages to get a new service in place. Our classmates definitely expressed interest in a redesigned route system, and this fall, I feel like the Hopkins community will be very pleased with what we’ve done.”

While the new schedule doesn’t officially go into effect until Aug. 24, the shuttles will run along the new routes one week prior to collect accurate tracking data for the NextBus system. Founded in 1996, NextBus now services transportation systems in many major cities across the United States, providing accurate data on where a bus or train is currently located and when it’s due to arrive at a set location.

To view the Blue Jay Shuttle routes and to track the vans or Homewood-JHMI shuttle buses, go to www.nextbus.com on either a computer or a smart phone. Passengers will also be able to call NextBus at 410-834-2833 and enter a stop number to receive vehicle tracking information via text message.

For more information and a list of stops by route, go to parking.jhu.edu. For any questions about the Blue Jay Shuttle service, contact bluejayshuttle@jhu.edu.