You can count on this: Math ability is inborn 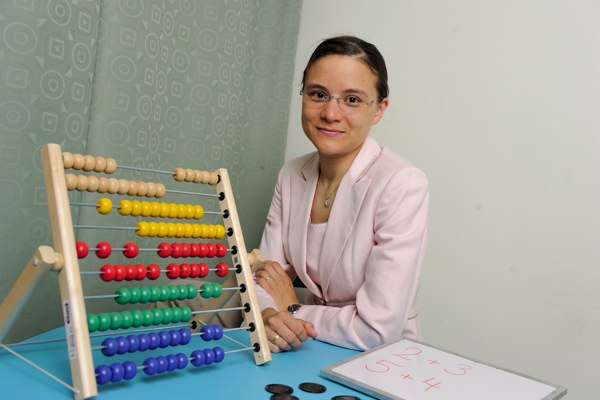 Melissa Libertus’ study is the first to examine the role of number sense in children too young to have had substantial formal mathematics instruction. Photo: Will Kirk/Homewoodphoto.jhu.edu

We accept that some people are born with a talent for music or art or athletics. But what about mathematics? Do some of us just arrive in the world with better math skills than do others?

It seems we do, at least according to the results of a study by a team of Johns Hopkins University psychologists. Led by Melissa Libertus, a postdoctoral fellow in the Department of Psychological and Brain Sciences in the Krieger School of Arts and Sciences, the study—published online in a recent issue of Developmental Science—indicates that math ability in preschool children is strongly linked to their inborn and primitive “number sense,” called an approximate number system, or ANS.

Research reveals that number sense is basic to all animals, not just human beings. For instance, creatures that hunt or gather food use it to ascertain where they can find and procure the most nuts, plants or game and to keep track of the food they hunt or gather. We humans use it daily to allow us, at a glance, to estimate the number of open seats in a movie theater or the number of people in a crowded meeting. And it is measurable, even in newborn infants.

Though the link between ANS and formal mathematics ability already has been established in adolescents, Libertus says that her team’s study is the first to examine the role of number sense in children too young to have had substantial formal mathematics instruction.

“The relationship between number sense and math ability is important and intriguing because we believe that number sense is universal, whereas math ability has been thought to be highly dependent on culture and language and takes many years to learn,” Libertus said. “Thus, a link between the two is surprising and raises many important questions and issues, including one of the most important ones, which is whether we can train a child’s number sense with an eye to improving his future math ability.”

The team tested 200 4-year-old (on average) children on several tasks measuring number sense, mathematical ability and verbal ability. The children were rewarded for their participation with small trinkets, such as stickers and pencils.

During the number sense task, researchers asked the children to view flashing groups of blue and yellow dots on a computer screen and estimate which color group had more dots. Counting wasn’t an option, both because the dots were flashed so quickly and because most of the children were not yet skilled counters. The preschoolers would then verbally tell the tester whether the yellow or blue dots were more numerous, and the tester would press the appropriate button. Some comparisons were easy (like comparing five yellow versus 10 blue dots). Others were much harder (like comparing five yellow versus six blue dots). Children were informed of right or wrong answers via a high- or low-pitched beep. (You can take a test similar to the one administered to the children online at www.panamath.org/testyourself.php.)

The children also were given a standardized test of early mathematics ability that measures numbering skills (verbally counting items on a page), number comparison (determining which of two spoken-number words is greater or lesser), numeral literacy (reading Arabic numbers), mastery of number facts (such as addition or multiplication), calculation skills (solving written addition and subtraction problems) and number concepts (such as answering how many sets of 10 are in 100). This standardized test is often given to children between the ages of 3 and 8 years.

Lastly, the parents and guardians of the children were given an assessment that asked them to indicate each word on a list that their children had been heard to say. According to Libertus, this verbal test was administered because language and math abilities are to some extent linked through general intelligence, and the researchers wanted to make sure that the differences in math ability that they found were not just due to some children performing better on all kinds of tasks, or to some children feeling more comfortable being tested than others.

Libertus and her colleagues Lisa Feigenson and Justin Halberda, both faculty members in the Department of Psychological and Brain Sciences, found that the precision of children’s estimations correlated with their math skill. That is, the children who could make the finest-grained estimations in the dot comparison task (for example, judging that eight yellow dots were more than seven blue dots) also knew the most about Arabic numerals and arithmetic.

According to the researchers, this means that inborn numerical estimation abilities are linked to achievement (or lack thereof) in school mathematics.

“Previous studies testing older children left open the possibility that differences in instructional experience are what caused the difference in their number sense—in other words, that some children tested in middle or high school looked like they had better number sense simply because they had had better math instruction,” Libertus said. “Unlike those studies, this one shows that the link between number sense and math ability is already present before the beginning of formal math instruction.”

“Of course, many questions remain, and there is much we still have to learn about this,” Libertus said. “But what we have done raises many important avenues for future research and applications in education. One of the most basic is whether we can train children’s approximate number system and thereby improve their math ability, and whether we can develop school math curricula that make use of children’s ANS abilities and thus help them grasp more-advanced math concepts earlier.”

The study was funded by the National Institute of Child Health and Human Development.

The article in ‘Developmental Science’