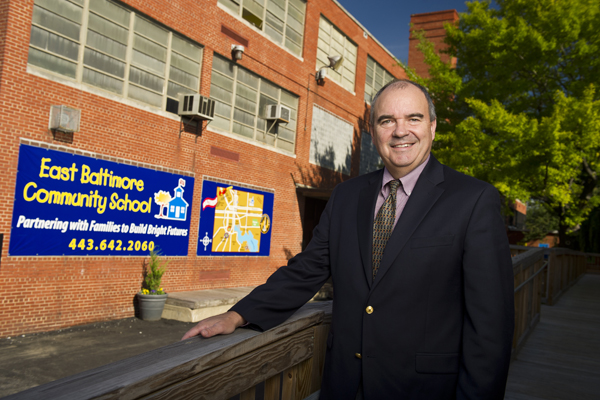 The Johns Hopkins School of Education, headed by Dean David Andrews, above, has taken over the day-to-day operations of the East Baltimore Community School. A national search is being conducted to select a new principal. Photo: Will Kirk/Homewoodphoto.jhu.edu

East Baltimore Community School students returned to classes last week, albeit a few days later than expected due to power outages, courtesy of Hurricane Irene. After the back-to-school shock wore off, the students surely noticed the school’s new crop of teachers, the spruced-up classrooms and hallways, and perhaps the new leadership.

The real changes, however, are only just getting started—and Johns Hopkins will be there every step of the way.

If all goes according to plan, the small contract school will become a showcase for best teaching practices and stand as a model for urban-based K-8 education.

Specifically, Johns Hopkins has taken over the day-to-day operation of the school through a contract with the school’s board. Morgan State will assume the primary governance representation of the partnership.

David Andrews, dean of the Johns Hopkins School of Education, is leading a committee in a national search to select a new principal. Carol Deloatch, who previously served as the school’s assistant principal, will lead the school in the interim.

Andrews said that the new partnership cements Johns Hopkins’ long-term commitment to the East Baltimore Community School and the desire to transform it into the highest-performing school in the district.

“We have the capacity to do that. We have some of the most progressive education reform thinkers here who can implement programs with a track record of success,” Andrews said. “Johns Hopkins is involved with this school because we can make a difference. We are committed to reducing the achievement gap and making this a demonstration site of best practices. We like to say this is a small school that will leave a big footprint.”

East Baltimore Development Inc., the nonprofit entity created to oversee the redevelopment of 88 acres north of Johns Hopkins’ East Baltimore campus, opened the East Baltimore Community School in 2009 with 120 students. This fall, the school begins its third year, with approximately 260 students in kindergarten and first, second, third, sixth and seventh grades. Grades four, five and eight will be added incrementally.

The school, temporarily located at 1101 N. Wolfe St. and officially a charter school of the Baltimore City Public School System, was previously known as the Elmer Henderson Elementary School.

Wanting to create one of the best schools in the city, the EBCS board called upon the expertise and urban school experience of the education schools at Johns Hopkins and Morgan State. Both universities have been integrally involved with the start-up of the school, and representatives have served on governance committees, advised the principal and staff, and participated in the design and implementation of best practices.

David G. Nichols, the Mary Wallace Stanton Professor and vice dean for education at the Johns Hopkins University School of Medicine, chairs the school’s board, which includes Andrew Frank, special adviser to the president of Johns Hopkins on economic development.

Andrews said that Johns Hopkins wants to ensure that all children are ready to learn when they enter kindergarten and are fully prepared to enter both the high school and college of their choice.

The EBCS will be the first new school built in East Baltimore in 25 years and will be made possible through Johns Hopkins University contributions, private philanthropy, agency grants and tax increment financing. No Baltimore City Public School capital funds will be used. Among the partners involved in the project are the Annie E. Casey Foundation and the Weinberg Foundation.

Johns Hopkins will contribute $3 million for capital expenses and plans to provide an annual $750,000 operating subsidy for eight years.

Rogers Marvel Architects was unanimously selected by the school’s partners to design the new facility, which will include a gym, auditorium and library, all available for community use. The library will provide access to the East Baltimore Historical Library, and community lending services are being explored through the Enoch Pratt Free Library and Johns Hopkins. The overall campus will serve as a community hub for family engagement, citizenship and wellness, Andrews said.

Andrews said that the project provides a unique opportunity to demonstrate the transformational power of creating a high-performing school that serves a diverse, mixed-income community of students and families.

“We want to maximize the growth and potential of the children who pass through this school’s doors, and pick up any children lagging behind,” he said.

Johns Hopkins has already hired new teachers and this summer put them through extensive training and professional development. The university also has helped purchase new classroom technology and dressed up the current space with some paint and polish.

Annette Anderson, the School of Education’s new assistant dean for community schools, will oversee Johns Hopkins’ role with the school. Anderson previously served as the first principal of the Widener Partnership Charter School in Chester, Pa., which out-performed all other schools in the district in its opening year.

The School of Education plans to implement the most progressive, effective, evidence-based models of instruction available.

In addition to a continued commitment to a project-based approach to learning, the school will implement Success for All, developed by School of Education professors Robert Slavin and Nancy Madden. Success for All is recognized by the U.S. Department of Education as one of the most effective evidence-based programs available to improve student performance. The whole-school reform program is currently being utilized in 1,000 schools and has received additional funding to nearly double that number over the next three to five years.

“We will bring the best of Johns Hopkins to bear,” Andrews said. “Johns Hopkins faculty and staff will have ample opportunity to contribute to the development of this school.”

To achieve its lofty aims, the school takes a holistic approach that focuses on the behavioral, cognitive and physical health of the student, in addition to academic achievement. It will emphasize individualized learning, and family and community involvement supported by wrap-around services such as family counseling.

In terms of enrollment and eligibility, children of catchment area residents and families relocated from the EBDI redevelopment area will be given priority. The remaining student capacity will be filled by children of those who work within the catchment area and at-large children citywide.

“We certainly want to attract the Johns Hopkins employees who work in the area,” said Andrews, who will be moving into a home just blocks from the school. “We hope the success of this school will become a magnet for others to move into the area.”

On Wednesday, Sept. 21, preliminary designs for the school will be presented at an Architecture Open House to be held from noon to 1:30 p.m. in the Armstrong Building on Johns Hopkins’ East Baltimore campus. All employees are invited to attend.

For more information and updates on the JHU/Morgan State partnership with the EBCS, go to education.jhu.edu/ebcs.