On the ground in South Africa 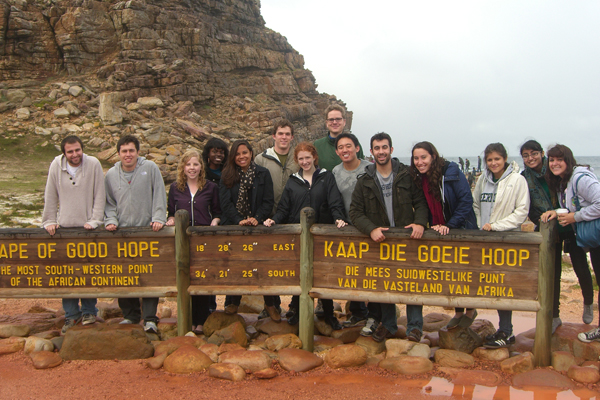 Saznin Mehta encountered many people in South Africa who left an impression, but perhaps nobody affected her more than the nurse with a photographic memory.

Mehta, a senior majoring in public health studies, met the woman during her internship at Ubuntu Africa, a small nongovernmental organization that facilitates access to clinical and social services for HIV-infected children in Khayelitsha, the largest township in Cape Town.

The undergraduate marveled at the nurse’s recall of the names and backgrounds of the nearly 170 children enrolled at the center.

“She knew everything about all of them—their specific behavioral problems, the last time they went to a clinic,” Mehta said. “The organization didn’t have a database. The information was all in her head, filed to memory.”

“She was the center’s only nurse and spent just about all her time there,” Mehta said. “She was a huge inspiration to me.”

Mehta and 13 other Johns Hopkins undergraduates traveled to South Africa this summer for the inaugural Public Health Studies Program Abroad in Cape Town, a partnership between Johns Hopkins, the University of Cape Town and five local nongovernmental organizations.

The program came as a result of the Johns Hopkins global health awards initiative, unveiled by President Ronald J. Daniels in March 2010. In total, 85 grants were created for students in all divisions to pursue international public health experiences and projects around the globe, including those building upon existing Johns Hopkins partnerships with universities and organizations.

As part of the initiative, Johns Hopkins developed undergraduate public health rotations in Uganda and South Africa, building upon the School of Medicine’s and School of Public Health’s 20-year relationships with the Makerere University in Kampala, Uganda, and the University of Cape Town.

The Cape Town program this summer was open to 14 undergraduates who had completed one to three years of university study with a focus on public health. The Uganda program will be launched during Intersession 2012 [see box]. Both are subsidized by the President’s Office.

The students departed on June 7 for the six-week Cape Town program, which consisted primarily of one academic course at the University of Cape Town and one community-based learning course centered around the NGO placements where the students interned three days a week. The sites were chosen for their focus on health, including sites dedicated to tuberculosis, HIV and drug rehabilitation.

The three-credit course at the University of Cape Town, which met twice a week, provided the students with an overview of public health in South Africa. Using HIV/AIDS as a case study, the students reviewed cultural, political and health systems contributors to the current context. They also spent considerable time on the legacy of apartheid.

The program also included structured excursions, including a tour of the city, a walking tour of the Bo-Kaap district, a full-day trip to Cape Point and a trip to Robben Island. One weekend was spent in a homestay in Zwelethemba, outside Worcester.

They also spent two days as a group in Johannesburg, where they visited the Apartheid Museum, the Hector Pieterson Museum, and the former homes of Nelson Mandela and Bishop Desmond Tutu, and went on a bike tour of the Soweto township.

They next moved to Kruger National Park for a two-night stay, before arriving at the University of Cape Town on June 12, where they lived in the dormitory.

The goal was to have the students learn from the experience and contribute directly to the agencies.

Mehta certainly did. She, along with the three other student interns, created a monitoring and evaluation kit for the center, built a database and wrote, edited and designed fundraising materials.

“My supervisors were great,” she said. “We got to do substantive work, especially given that it was a six-week experience. They valued our input and perspective and made us feel like a valued part of the organization.”

Sarah Islam, a senior majoring in public health studies, interned at Kheth’Impilo, a USAID-funded project that supports clinics in the area. Islam’s primary role was working with HIV/AIDS patient advocates on home visits to be sure that patients were adhering to their treatment regimen, and developing new materials, mostly brochures for an adolescent audience, about HIV prevention and testing.

Islam said that she leapt at the chance to study in South Africa.

“It seemed ideal, this opportunity to attend a university class and work in the field. Plus, I’ve always admired people like Nelson Mandela and Mother Theresa,” she said. “I was just fascinated by their prophetlike lives, and how they gave up so much. I was particularly drawn to Mandela’s notion of forgiveness after apartheid.”

Her first time in the country, Islam said, she was struck by the stark economic disparities in and around Cape Town. The city was very metropolitan and developed, she said, but you didn’t have to travel far to witness hardships.

“Just outside the city in the townships is where I saw tin shacks, large garbage piles and lots of children, not in school,” she said. “And all this was no less than half a mile from a golf course.”

At Kheth’Impilo, Islam shadowed the center’s staff and patient advocates on rounds and interviews where she saw firsthand the obstacles they face. In particular, the stigma attached to HIV deterred many males from being tested.

“Many of the challenges were cultural,” she said. “I was able to see how important the fields of sociology and anthropology are to public health practice. You can’t really tackle prevention until you understand how to approach it and ask the right questions to target groups.”

Lisa Folda, the program’s director and
an academic adviser and lecturer in the Public Health Studies Program, accompanied the students on the trip. She called the program a resounding success in every aspect.

“The students’ curiosity enabled them to learn so much, and the experience clearly had a deep impact on all of them,” Folda said. “They were also able to make substantive contributions to these agencies in a relatively short span of time. Many students expressed a desire to return.”

A new batch of students will return to Cape Town next summer, and Folda said she anticipates the group to be even larger.