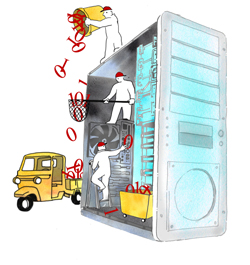 A digital dumping ground lies inside most computers, a wasteland where old, rarely used and unneeded files pile up. Such data can deplete precious storage space, bog down the system’s efficiency and sap its energy. Conventional rubbish trucks can’t clear this invisible byte blight. But two researchers say that real-world trash management tactics point the way to a new era of computer cleansing.

“In everyday life, ‘waste’ is something we don’t need or don’t want or can’t use anymore, so we look for ways to reuse it, recycle it or get rid of it,” said Hasan, an adjunct assistant professor of computer science. “We decided to apply the same concepts to the waste data that builds up inside of our computers and storage devices.”

With this goal in mind, Hasan and Burns, an associate professor of computer science, first needed to figure out what kind of computer data might qualify as “waste.” They settled on four categories:

• Unintentional waste data, created as a side effect or byproduct of a process, with no purpose.

• Used data, which has served its purpose and is no longer useful to the owner.

• Degraded data, which has deteriorated to a point where it is no longer useful.

• Unwanted data, which was never useful to the computer user in the first place.

The researchers found no shortage of files and computer code that fit into these categories. “Our everyday data processing activities create massive amounts of data,” their paper states. “Like physical waste and trash, unwanted and unused data also pollutes the digital environment … . We propose using the lessons from real-life waste management in handling waste data.”

The researchers say that a user may not even be aware that much of this waste is piling up and impairing the computer’s efficiency. “If you have a lot of debris in the street, traffic slows down,” Hasan said. “And if you have too much waste data in your computer, your applications may slow down because they don’t have the space they require.”

Even though data storage devices have become less expensive, Hasan said, hard drives can still run out of room. In addition, Flash-based systems, such as memory cards, possess a limited number of write-erase cycles, and frequent deleting of waste data can shorten their life span.

How then, can the clutter inside computers be curbed? To address the problem, Hasan and Burns devised a five-tier pyramid of options, inspired by real-world waste reduction tactics:

• Reduce: At the top of the pyramid, the most preferred option is to cut back on the amount of waste data that flows into a computer to begin with. This can be done, the Johns Hopkins researchers say, by encouraging software makers to design their programs to leave fewer unneeded files behind after a program is installed. To coax the software makers to comply, computers could be set up to “punish” programs that do excessive data dumping; such programs would be forced to run more slowly.

• Reuse: Software makers also could break their complex strings of code into smaller modules that could serve double duty. If two programs are found to utilize identical modules, one might be eliminated in a process called “data deduplication.” This is the second-best option in the waste-management pyramid, the researchers said.
• Recycle: Just as discarded plastic can be refashioned into new soda bottles, some files could be repurposed. For example, when old software is about to be removed, the computer could look for useful pieces of the program that could be put to work in other applications.

• Recover: Even when waste data can’t be reused or recycled, these digital leftovers might yield information worth studying after private identification details are removed. In their paper, the researchers suggest that “obsolete data can also be mined to gather patterns about historical trends.”

• Dispose: Sitting at the bottom of the pyramid, this is the least desirable option, the researchers say, and the messiest, when you consider the energy used to completely eliminate old files or the real-world pollution created when one destroys an old hard drive or other form of storage media. However, the scientists say, one solution could be a “digital landfill.” This could be accomplished with a “semivolatile storage device” that would provide a temporary home to data that is designed to automatically fade away over time, freeing up space for the next tenants.

Although the research paper has shined a spotlight on the digital waste issue, Hasan acknowledges that most computer users haven’t given much thought to the clutter piling up in their laptops, particularly when extra storage media and devices are relatively cheap. But, he pointed out, more users are moving toward “cloud” computing, in which files are sent over the Internet to a site where an enormous number of files can be stored. As this trend continues, such central storage sites could find themselves drowning in waste data. “Someday, this could become a problem as we begin using up these storage resources,” Hasan said. “Maybe we should start talking about it now.”

While working on this paper at Johns Hopkins, Hasan was supported by a National Science Foundation grant to the Computing Research Association for its Computing Innovation Fellows Project. Although he retains an affiliation with Johns Hopkins, Hasan recently assumed the post of assistant professor at the Department of Computer and Information Sciences at the University of Alabama at Birmingham.

The research paper by Hasan and Burns can be read online.