Digitizing a visual history of Baltimore 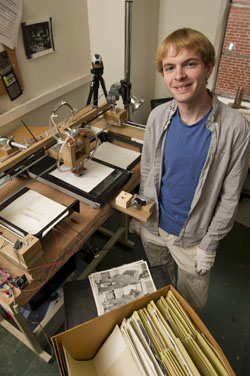 Thomas Smith with his original photo-scanning robot. His slimmed-down, newer version will be available to small archives and museums for around $500. Photo: Will Kirk/Homewoodphoto.jhu.edu

More DIY than R2D2, a student-invented robot will help preserve and archive 115 years of photographic black history in Baltimore, and could soon be made available to museums and archives around the country.

Thomas Smith, creator of the robot named Gado, spent a good portion of his senior year at Johns Hopkins tinkering on the machine, an open source robotic scanner designed for sensitive archival materials. He enjoyed the project so much, he never left.

Smith, who graduated last May with a degree in cognitive science and anthropology, conceived of the device following a visit to Baltimore’s Afro-American newspaper in spring 2010. He hoped to add visual elements to an oral history project he was working on with the Johns Hopkins Center for Africana Studies’ Diaspora Pathways Project.

On the newspaper’s second floor, he found a treasure trove.

By its estimation, the publication houses roughly 1.5 million photos—boxed up and sorted—that date back to the paper’s founding in 1892. The Baltimore-based company is the longest-running family-owned African-American newspaper in the nation. Its photo collection is a visual history of daily African-American life in Baltimore up until the present.

The Diaspora Pathways Project is a long-term initiative aimed at better understanding the changing landscape of the living African Diaspora, especially as it pertains to the greater Baltimore area. The Andrew W. Mellon Foundation awarded Johns Hopkins $476,000 for the initiative’s centerpiece, the Diaspora Pathways Archival Access Project, which involves collaborating with The Afro to open its historic archives to access by scholars and others.

In November 2007, the DPAAP selected five students from Johns Hopkins, Goucher College and Morgan State University as its initial intern cohort to uncover and describe the contents of the paper’s archives. Their work began in January 2008. The objectives of the project, which is supported by the univeristy’s Center for Educational Resources, are to identify important unprocessed collections at the newspaper, inventory and organize the collection, and ultimately create an online database for searching the material.

Problem was, Smith found, there was not yet an easy way to reference and disseminate the newspaper’s photos. The Afro wanted to digitize the collection and make it available to the public, but the newspaper had only one person to manually scan the photos. Why not automate the process, Smith thought.

He devised Gado (a West African word for inheritance), a 3-foot-wide by 2-foot-deep robotic arm that is able to lift flat and delicate materials using suction, place them on a scanner and scan them into a database or computer file system. The Center for Africana Studies provided funding to make Smith’s vision a reality. Using the funds, he pieced together some precision-cut wood, tubing and metal and gave it all a custom circuit-board brain. He did all this for $496.

Gado worked. At a rate of a photo every two minutes, the robot in testing session scanned and archived 1,000 photos, which are available in either print-ready or high-resolution electronic formats. In a stroke of good fortune, most of the photos had information on the subjects taped or stapled to the back, either full text or words written in grease pencil. Smith’s robot is able to scan this information and use it as metadata so that the photos can be searched by subject, name, location, year or other category.

In June, Smith launched phase two of Project Gado to create a more-user-friendly, slimmed-down version of the machine.  Gado 2, the “IKEA version” as Smith likes to call it, will be sold as a kit that staff at smaller archives and museums can assemble and use to digitize their photographic holdings. He wants to keep the cost to $500.

“The goal is to find other small archives who want to digitize their collections,” Smith said. “The ideal user is an archive with a large volume of relatively uniform materials and few human resources. The machine is perfect for something like a newspaper, since the paper’s business process resulted in a lot of images produced and stored at much the same size and in much the same way.”

Since Gado is an open source device, the public can use any aspect of the machine and apply it to wherever low-cost, autonomous digitization process is needed.

To make phase two possible, Smith received a grant from The Abell Foundation and funds from the JHU Sheridan Libraries. The project is being managed by Smith through the university’s Center for Social Concern in partnership with The Afro, the Center for Africana Studies and the Sheridan Libraries.

Smith said that images of everyday African-American life are scarce, a situation that makes the newspaper’s photos so valuable. The collection includes images of WWII soldiers, the civil rights era, street parties, local leaders, families and documentation of nearly 50 years of the newspaper’s “The Clean Block” campaign that started in the 1930s. The successful campaign, an annual event, sought to improve the physical appearance of, and reduce crime in, various Baltimore neighborhoods.

“Through just these photos, the collection provides a block-by-block visual history of the city,” he said.

Gado 2 will not only be smaller and cheaper but faster, too. Smith plans for the device to scan images in 30 seconds. Gado 2 will feed the scanned photos into two separate databases, one for images at a lower resolution available online free to anyone, and the second to house high-resolution images capable of being blown up to billboard size without distortion and available for a fee.

“This will help create a new revenue stream for the organization and keep the project sustainable,” Smith said. “Basically, the idea for Gado 2 was to reduce complexity and use the cost savings to source and manufacture higher-quality parts to have a faster and more robust machine for the same price tag as before.”

Historical images such as those on file at The Afro are sought after by other news publications, documentary filmmakers and historians. A historical image license can be sold for between $200 and $700, depending on the medium.

Smith said he anticipates that Gado 2, once completed, will scan 20,000 more images this year, enough to launch a licensing website. He also wants to sign an agreement with at least one other archive or museum.

Moira Hinderer, an archivist with the Sheridan Libraries and a lecturer in the History Department and the Center for Africana Studies, said, “The Afro’s collection is just such an incredibly rich visual resource in African-American history. It will keep scholars busy for years. It’s my hope that Tom’s efforts will bring these photographs before a much broader audience,” she said. “Certainly this could be a wonderful resource for local educators and students.”

Smith currently works on Gado 2 in the basement of the Center for Social Concern’s building on North Charles Street, just blocks from The Afro. While he appreciates the use of the space, he admits that the dimly lit, unfinished area is not an ideal location to work on sensitive machinery.

Smith plans to move the project into the Emerging Technology Center at the Johns Hopkins at Eastern campus later this month.