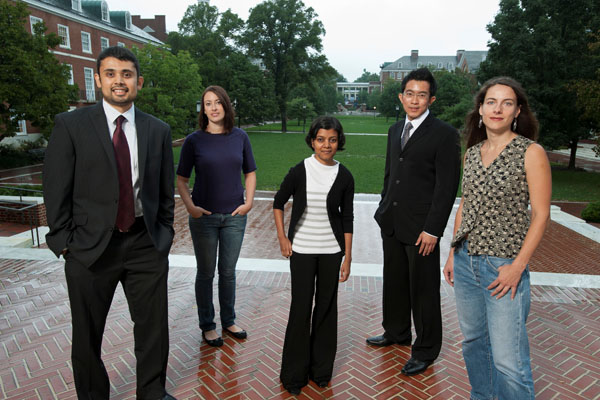 Five Johns Hopkins graduate students who are applying the latest advances in biology and technology to the prevention and treatment of health problems such as cancer and brain disorders have been named to the 2012 class of Siebel Scholars. The merit-based program provides $35,000 to each student for use in his or her final year of graduate studies.

The Johns Hopkins recipients, who expect to receive their doctoral degrees in May, were among 85 students selected this year from prominent graduate schools in the United States and China, including Harvard, Princeton, MIT and Stanford.

The Siebel Scholars program was founded in 2000 by the Siebel Foundation to recognize the most talented students at the world’s leading graduate schools of business, computer science and bioengineering. The program’s more than 700 recipients from 19 graduate programs serve as advisers to the Siebel Foundation and work collaboratively to find solutions to society’s most pressing problems.

• Manisha Aggarwal, of Ghaziabad, India: Under the supervision of Susumu Mori, a professor of radiology in the School of Medicine, Aggarwal has been using a technology called high-field diffusion tensor magnetic resonance micro-imaging to view white matter in mouse brains, a key step toward developing new ways to conduct brain research in humans.

• Hannah Carter, of Louisville, Ky.: Under the supervision of Rachel Karchin, an assistant professor of biomedical engineering, Carter is using computer technology to study the role of genetic mutations in cancer. By teasing out the few mutations responsible for tumor growth and drug resistance, she hopes to speed up the search for drug targets and identify which tumors are most likely to respond to treatment by anti-cancer drugs.

• Stephanie I. Fraley, of Chattanooga, Tenn.: Under the supervision of Denis Wirtz, a professor of chemical and biomolecular engineering, Fraley is investigating the basics behind how cancer cells spread the disease through the body and how this might be prevented. Her work has led to one patent filing and the beginning of a diagnostics-based start-up company.

• Donny Hanjaya-Putra, of Surabaya, Indonesia: Under the supervision of Sharon Gerecht, an assistant professor of chemical and biomolecular engineering, Hanjaya-Putra designs three-dimensional scaffolds that enable stem cells to grow, differentiate and form functional networks of tiny blood vessels. His goal is to provide a blood supply that will support efficient human tissue and organ transplantation.

• Suneil Hosmane, of Dekalb, Ill.: Under the supervision of Nitish Thakor, a professor of biomedical engineering, Hosmane has developed innovative micro-devices that have shed light on new communication pathways that govern neurodegenerative diseases, such as multiple sclerosis and transverse myelitis.

Siebel Scholars are selected from among students who rank at the top of their class. They are chosen by the deans of their respective schools on the basis of outstanding academic achievement and demonstrated leadership.

“Being recognized as one of the nation’s top bioengineering programs is a terrific honor for the school and for our five outstanding graduate students,” said Nick Jones, the Benjamin T. Rome Dean of the Whiting School. “The distinction provides our students with entry into a community of exceptionally talented future leaders and expands their opportunities for entrepreneurship and collaboration—goals that are integral to our academic program.”

Karen Roter Davis, executive director of the Siebel Scholars Foundation, added, “We are proud to support the Siebel Scholars Class of 2012 as they collaborate and forge lifelong ties with this engaged community of leaders. They are joining an exceptional group of talented individuals working together with the Siebel Foundation to address critical societal issues in health, food and energy.”

In October, current and alumni Siebel Scholars will meet in Virginia to explore the science, applications, benefits and risks of synthetic biology with world-renowned scientific, industry, ethics and policy experts.