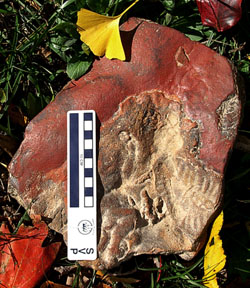 The fossil of ‘Propanoplosaurus marylandicus’ measures only 13cm long, just shorter than the length of a dollar bill.

Researchers at the Johns Hopkins University School of Medicine, with help from an amateur fossil hunter in College Park, Md., have described the fossil of an armored dinosaur hatchling. It is the youngest nodosaur ever discovered, and a founder of a new genus and species that lived approximately 110 million years ago during the Early Cretaceous Era. Nodosaurs have been found in diverse locations worldwide, but they’ve rarely been found in the United States. The findings are published in the Sept. 9 issue of the Journal of Paleontology.

“Now we can learn about the development of limbs and the development of skulls early on in a dinosaur’s life,” said David Weishampel, a professor of anatomy at the Johns Hopkins University School of Medicine. “The very small size also reveals that there was a nearby nesting area, or rookery, since it couldn’t have wandered far from where it hatched. We have the opportunity to find out about dinosaur parenting and reproductive biology, as well as more about the lives of Maryland dinosaurs in general.”

The fossil was discovered in 1997 by Ray Stanford, a dinosaur tracker who often spent time looking for fossils close to his home. This time, he was searching a creek bed after an extensive flood. Stanford identified it as a nodosaur and called Weishampel, a paleontologist and expert in dinosaur systematics.

Weishampel and his colleagues established the fossil’s identity as a nodosaur by recognizing a distinctive pattern of bumps and grooves on the skull. They then did a computer analysis of the skull shape, comparing its proportions to those of 10 skulls from different species of ankylosaurs, the group that contains nodosaurs. They found that this dinosaur was closely related to some of the nodosaur species, although it had a shorter snout overall than the others. Comparative measurements enabled them to designate a new species, Propanoplosaurus marylandicus. In addition to being the youngest nodosaur ever found, it is the first hatchling of any dinosaur species ever recovered in the eastern United States, Weishampel says.

The area where the fossil was found had originally been a flood plain, where Weishampel says that the dinosaur drowned. Cleaning the fossil revealed a hatchling nodosaur on its back, much of its body imprinted along with the top of its skull. Weishampel determined the dinosaur’s age at time of death by analyzing the degree of development and articulation capability of the ends of the bones, as well as deducing whether the bones themselves were porous, as young bones would not be fully solid.

Size was also a clue. The body in the tiny fossil was only 13 cm long, just shorter than the length of a dollar bill. Adult nodosaurs are estimated to have been 20 to 30 feet long. Weishampel also used the position and quality of the fossil to deduce the dinosaur’s method of death and preservation: drowning and getting buried by sediment in the stream. Eggshells have never been found preserved in the vicinity, and by the layout of the bones and the size of some very small nodosaur footprints found nearby, Weishampel was led to believe that the dinosaur was a hatchling, rather than an embryo, because it was able to walk independently.

“We didn’t know much about hatchling nodosaurs at all prior to this discovery,” said Weishampel, who is affiliated with the Johns Hopkins Center for Functional Anatomy and Evolution. “And this is certainly enough to motivate more searches for dinosaurs in Maryland, along with more analysis of Maryland dinosaurs.”

Stanford has donated the hatchling nodosaur to the Smithsonian’s National Museum of Natural History, where it is now on display to the public and also available for research.

Center for Functional Anatomy and Evolution at Johns Hopkins