Trained generations of physicians in the art of interviewing patients 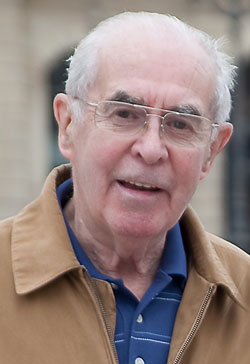 James Patrick Connaughton, professor emeritus of psychiatry and pediatrics and a superbly talented clinician who treated and cared for some of East Baltimore’s most vulnerable children, died on Sept. 11 at his Woodbrook home. The cause of death was pancreatic cancer. Connaughton, who was 80, had been treated for the disease at the Johns Hopkins Sidney Kimmel Comprehensive Cancer Center, where he received outstanding medical care, family members say.

“Jim was one of the giants of child psychiatry at Hopkins, a master of psychotherapy and a gifted clinician with unparalleled skill for compassionately interviewing children,” said colleague and friend James Harris, director of Developmental Neuropsychiatry and a former director of Child Psychiatry at the Johns Hopkins Children’s Center.

Connaughton was the founding director of the Johns Hopkins Children’s Mental Health Center, a community psychiatric clinic that has helped generations of Baltimore’s children and youth deal with psychological trauma and behavioral problems.

Colleagues remember Connaughton as the backbone of the center, which he founded in 1981 and directed until 1993, and an unwavering presence in the clinic, taking care of patients and always running back and forth between the main hospital and Caroline Street, where the center is located.

During his 31 years at Johns Hopkins, Connaughton mentored generations of fledgling psychiatrists and taught them the art and science of interviewing children with mental health problems.

He had a rare talent for talking to and connecting with children, a psychiatrist’s most valuable diagnostic tool.

“You can’t fool a child, and those kids whose lives were one huge trauma knew they could trust him, and they loved him,” said Catherine DeAngelis, a professor of pediatrics at Johns Hopkins and former JAMA editor, who did a pediatric residency under Connaughton and later worked with him.

“He was the most modest man of great integrity and love for children,” DeAngelis added. “He was underappreciated because he wasn’t boastful and didn’t do research. He took care of kids with problems—that’s what he did—and he did it like no one else I’d ever known.”

“He could befriend a child in five minutes and talk to them on their level to get the most important information. I learned a lot from him about interviewing children and so did many others,” said former student Marco Grados, who is now clinical director of Child and Adolescent Psychiatry at Hopkins Children’s.

Maryland Pao, the clinical director of the National Institute of Mental Health and an assistant professor at Johns Hopkins, said that Connaughton was a formative influence on her. She met Connaughton as a third-year medical student and went on to do a psychiatry rotation under him.

“He played a pivotal role in my decision to become a child psychiatrist,” said Pao, who subsequently nominated Connaughton for a teaching award at Johns Hopkins, one of several he received.

Colleagues and students remember Connaughton as a mesmerizing storyteller whose charming brogue and gregarious, feisty personality made him a beloved figure.

His passion for helping the most underserved and traumatized children was contagious, Pao added. “He had a great turn of phrase and fired up these kids’ imaginations, and had the same effect on his students,” she said.

Born and raised in Dublin, Connaughton graduated with a medical degree from University College Dublin and, in 1958, with his wife, Monica, set out for the United States for a psychiatric residency at the Seton Psychiatric Institute in Baltimore.

From 1961 to 1965, Connaughton taught and practiced at Marquette University in Wisconsin, where he also worked as a senior staff psychiatrist at Milwaukee Psychiatric Hospital. During this period, Connaughton also was involved in the design of the Peace Corps program and the training of its first crop of volunteers.

In 1965, Connaughton returned to Maryland and spent the next 31 years at Hopkins Children’s as a clinician, a teacher and a mentor. Between 1967 and 1981, he directed numerous programs at Johns Hopkins and consulted with many local and regional mental health clinics, including the Dundalk Mental Health Clinic, Associated Catholic Charities, Oldfields School, Children’s Guild, John F. Kennedy Institute, Villa Maria Residential Treatment Center and Francis Scott Key Community Psychiatry Program.

He worked closely with the City of Baltimore Department of Education, community mental health programs and the East Baltimore Mental Health Center.

Taking care of underserved and troubled children and supervising psychiatric residents remained Connaughton’s unwavering focus until his retirement in 1997.

A voracious learner, he enrolled in the Business of Medicine program at Johns Hopkins and, in 2002, earned a master’s degree.

Connaughton was elected a Distinguished Life Fellow of the American Psychiatric Association and a fellow of the Royal College of Psychiatrists in the United Kingdom.

He won Teacher of the Year Award at Johns Hopkins several times, an accolade bestowed by medical residents on their mentors. This, his family said, was among the accomplishments he cherished most.

Connaughton is survived by his wife of 54 years, Monica; their three sons, two daughters and 14 grandchildren; a brother; and a sister.