Provost’s initiative will kick off with lecture series, interviews 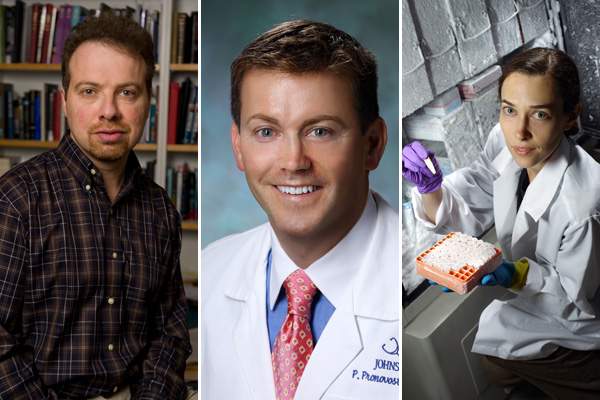 From the proximity fuse that helped the Allies win World War II to the first “blue baby” operation that opened the way to modern heart surgery, Johns Hopkins University boasts a history and culture of innovation and discovery. Since its inception, the university and its personnel have pushed the boundaries of human understanding in a number of fields, at times making the seemingly impossible a reality.

To celebrate and help support this culture, the Office of the Provost has launched the Provost’s Project on Innovation to spotlight current Johns Hopkins faculty and staff who are on discovery’s frontline.

The Provost’s Lecture Series, begun in 2010 to spread the wealth of academic excellence at Johns Hopkins among its campuses, will kick off the initiative.

The theme of this year’s lecture series will be innovation, highlighting the unique role of research universities in fostering innovative thinking and creative solutions to some of the world’s greatest challenges. The stellar fall lineup will feature patient safety champion Peter Pronovost, tissue engineering expert Jennifer Elisseeff and award-winning astrophysicist Adam Riess.

“From pioneering the use of the checklist in health care, to inventing biomaterials, to discovering the accelerating universe, the fall lineup demonstrates the breadth of innovative and creative thinking at Johns Hopkins,” said Lloyd B. Minor, provost and senior vice president for academic affairs. “Innovation is at the heart of our mission. We have the tools, we have the minds, the expertise, the skills and experience needed to discover innovative solutions to age-old and emerging problems. Research universities have long pushed the boundaries of what is known. As chief academic officer, I see every day how these pieces come together, allowing us to approach old problems with new ideas.”

Minor said that the Project on Innovation, which also will manifest itself in his public speeches and a yearlong series of faculty innovation stories on the Provost’s Office website, will also help illustrate how the world’s most pressing problems, such as the global water crisis and health care delivery, demand a tapestry of expertise.

“Finding these solutions will require bringing people and ideas together in new and creative ways,” he said. “Universities bring multiple experts and disciplines together to take up the profoundly complex issues that can be solved no other way. Assumptions are routinely questioned, ideas are debated, and new knowledge is created and shared. Research universities are havens of ideas and laboratories of innovation.”

The fall series opens on the Homewood campus with a talk by Peter Pronovost, director of the new Armstrong Institute for Patient Safety and Quality and Johns Hopkins Medicine senior vice president for patient safety and quality. Pronovost will discuss the importance of health-delivery research from 4:30 to 6:30 p.m. on Oct. 13 in Gilman Hall, room 50.

While patients have benefited significantly from the investment in biomedical research, “preventable harm” is the third-leading cause of death in the United States, according to Pronovost, a professor of anesthesiology and critical care medicine in the School of Medicine. His talk will focus on how research universities can help address the U.S. health care crisis.

Pronovost, who also holds appointments in the schools of Public Health and Nursing, has dedicated his career to finding ways to make hospitals and health care safer for patients. He developed a scientifically proven method for reducing the deadly infections associated with central line catheters. His checklist protocol, piloted in Michigan, virtually eliminated these infections at participating hospitals, saving 1,500 lives and $100 million annually for the state. The checklist protocol is now being implemented in other states and in several other countries.

Pronovost chronicled his efforts in his new book, Safe Patients, Smart Hospitals: How One Doctor’s Checklist Can Help Us Change Health Care from the Inside Out. He has published more than 400 articles related to patient safety. He serves in an advisory capacity to the World Health Organization’s World Alliance for Patient Safety and regularly addresses Congress on related medical issues.

He has won several national awards, including the 2004 John Eisenberg Patient Safety Research Award and a coveted MacArthur Fellowship in 2008. He was named by Time magazine as one of the world’s “100 most influential people” in 2008.

Jennifer Elisseeff’s talk, to take place on Nov. 21 at the Bloomberg School of Public Health, will be titled “Materials in Medicine: From Tools to Translational Tissue Engineering.” The event is scheduled for 5 to 7 p.m. in the Feinstone Room, E2030.

Elisseeff said that recent advances in synthesis and design allow researchers to create and manipulate synthetic structures that mimic many aspects of native tissue. The understanding of cell response to biomaterials and structure-function correlations, she said, is being leveraged to design composite biomaterials that can direct tissue repair and regeneration for translational tissue engineering in the musculoskeletal, craniofacial and ocular systems.

Elisseeff, an associate professor at the School of Medicine and the Jules Stein Professor in Ophthalmology at its Wilmer Eye Institute, joined Johns Hopkins in 2001 as an assistant professor in the Department of Biomedical Engineering.

In 2004, she co-founded Cartilix Inc., a company that combined adhesive and biomaterial technologies for treating orthopedic disease. In 2009, she founded Aegeria Soft Tissue and Tissue Repair, two startups that both focused on soft-tissue regeneration and wound healing.

Elisseeff also directs the recently established Translational Tissue Engineering Center at Johns Hopkins in collaboration with the university’s Biomedical Engineering Department. She serves on several advisory boards and in 2008 was elected a fellow in the American Institute for Medical and Biological Engineering.

In the final talk of the fall series, Adam Riess will discuss “Dark Energy and the Cosmic Expansion History” at the Applied Physics Laboratory. The event will take place from noon to 2 p.m. on Jan. 27, 2012, in Parsons Auditorium. An overflow room will be created as last year’s Provost’s Lecture at APL with Charles Bennett was so popular that space ran out.

Riess, a professor of physics and astronomy at Johns Hopkins and a staff member at the Space Telescope Science Institute, leads the High-z SN Search Program, which uses the Hubble Space Telescope to discover distant supernovae. The program has studied the expansion of the universe more than 10 billion years ago. This work has detected an early phase of decelerating expansion, causing the most distant supernovae to look relatively brighter.

In his talk, Riess will explain how the universe’s expansion rate and its evolution must be empirically determined to reveal its composition, scale, age and fate. He will review a number of recent Hubble Space Telescope experiments, including improvements in the determination of the Hubble constant using a new infrared array, and a three-year search for the most distant exploding stars.

In 1998, as a Miller Fellow at the University of California at Berkeley, he led the study for the High-z Supernova Search Team that first reported evidence that the universe’s expansion rate is accelerating. Science magazine named the discovery the “Breakthrough of the Year” in 1998.

In 2006, he shared the Shaw Prize in Astronomy for the discovery of cosmic acceleration and the 2007 Gruber Prize with members of the High-z team and the Supernova Cosmology Project. Riess was awarded a MacArthur Fellowship in 2008, elected to the National Academy of Sciences in 2009 and was a co-recipient of the Einstein Medal in 2011.

Each lecture will be followed by a Q&A session and reception.

The fall series will also include an external speaker, Newark, N.J., Mayor Cory Booker, at 5:30 p.m. on Saturday, Oct. 15, in Shriver Hall on the Homewood campus. Booker’s lecture is in partnership with the Milton S. Eisenhower Symposium, whose theme this year is “America’s Boundless Possibilities: Innovate, Advance, Transform.”

Mayor of Newark since 2006, Booker has earned a reputation as one of the country’s most innovative leaders. Under his leadership, the city has reduced crime and brought a sense of renewal to streets. He was named one of the “100 Most Influential People” in 2011 by Time magazine and is often called the “innovative mayor.”

The spring 2012 Provost’s Lecture Series lineup features clinical psychologist and bipolar disorder expert Kay Jamison from the School of Medicine, child psychologist Lisa Feigenson from the School of Arts and Sciences, and Provost Minor, a scientist and surgeon and University Distinguished Service Professor of Otolaryngology–Head and Neck Surgery.

The online Project on Innovation series of faculty profiles, scheduled to premier Oct. 3 at www.jhu.edu/provost, will feature wide-ranging conversations with innovative thinkers from every division, beginning with Krieger-Eisenhower Professor of Anthropology Veena Das, whose work has expanded anthropologists’ understanding of complex societies.

For more information on the upcoming lectures, go to www.jhu.edu/provost/lectures. Those planning to attend are asked to email provostrsvp@jhu.edu.