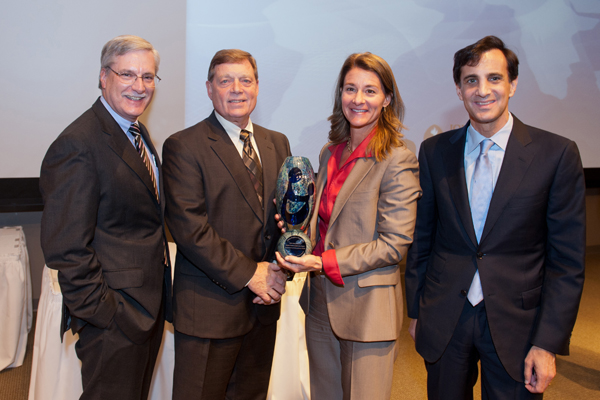 The Bloomberg School of Public Health’s Department of International Health, the first and largest academic program of its kind, turned a distinguished half-century old last month. To mark the milestone occasion, the department honored two of the world’s leading public health philanthropists and unveiled a new center to save the lives of mothers and newborns around the globe.

At a Sept. 24 ceremony in the school’s Sommer Hall, the department presented its first Global Health Leadership Award to Bill and Melinda Gates, citing their “visionary leadership” and the work of the Bill and Melinda Gates Foundation in helping save the lives of millions of people in the developing world. Melinda Gates accepted the award on behalf of the couple.

“It has been a privilege to work with Johns Hopkins over the past decade, and Bill and I are honored to receive this award from such a respected partner of the foundation,” said Melinda Gates, co-chair of the foundation. “Johns Hopkins has been a leader in driving incredible progress in women’s and children’s health. Thanks to [its] innovative approach and perseverance, millions of lives around the world have been saved.”

The department used the occasion to announce the launch of the International Center for Maternal and Newborn Health, which will address the problem in the developing world of mothers dying during childbirth and newborns not surviving past the first few days of life. Nearly 3.7 million deaths annually occur in the first month of life, and an estimated 340,000 women die during childbirth. Nearly half of all these deaths take place in the developing world.

“The highest risk of mortality for women and children is around the time of childbirth,” said Robert Black, department chair and the Edgar Berman Professor in International Health. “We want to focus on the unique health problems related to pregnancy and childbirth and bring our collective expertise to bear on these issues.”

Mathuram Santosham, professor of international health and pediatrics, will serve as the center’s interim director.

For 50 years, the Department of International Health has sought to protect the lives of underserved populations, and has fostered profound global health improvements through development and dissemination of vaccines, diarrhea and pneumonia research, HIV/AIDS prevention, nutrition research and capacity-building for the poorest and most underserved populations.

The department grew out of long-standing interests at the School of Public Health in the global health problems of developing countries and in relevant research and program management by international agencies and national governments.

The department traces its roots to a 1959 meeting in Minneapolis of the Association of Schools of Public Health, attended by the school’s then dean, Ernest Stebbins. At the meeting, the director of health for the U.S. Agency for International Development presented a proposal to establish a grant program for training in international health. Stebbins asked Assistant Dean Timothy Baker to apply for the grant, which helped form the Division of International Health, launched in 1961 and located within the Department of Public Health Administration.

The division started off modestly, with only a handful of faculty and grants. The division’s students and faculty focused mostly on community health and health systems in low-income countries.

Over the first five years, Baker was instrumental in faculty recruitment, curriculum development, student mentoring and fundraising. He also established one of the school’s first endowed professorships, the Edgar Berman Professorship in International Health.

In 1967, the division became the independent Department of International Health. Carl Taylor, a visionary leader in public health, was named its founding chair.

Under Taylor’s leadership, the department focused its research and training on the delivery of global health care at the community level and on health services planning for developing countries.

Taylor is largely credited with founding the academic discipline of international health. He launched one of the department’s first major international efforts, the Narangwal Project in India, a large health services delivery research study.

Since 1985, Black has been at the helm of the rapidly growing, highly successful department.

Today, the department’s renowned
multidisciplinary faculty are viewed as global health leaders in health research, program implementation and health policy. The department has ongoing projects in, and partnerships with, more than 50 countries.

Roughly 300 students from 30 countries are currently enrolled in the department, which has 136 full-time and 415 total faculty.

The department is organized into four main program areas: global disease epidemiology and control; health systems; human nutrition; and social and behavioral interventions. It offers a master of science in public health degree and doctoral-level training in its program areas and in public health practice.

The department also trains students for leadership roles at international agencies, such as UNICEF and the World Bank, and at national assistance organizations, such as USAID.

Earlier this year, Black, an international expert in the prevention of childhood mortality and illness, was named a recipient of the 2011 Canada Gairdner Global Health Award. The annual award from the Gairdner Foundation recognizes individuals responsible for a scientific advancement that has made, or has the potential to make, significant impact on health in the developing world. Black received the $100,000 award for his significant contributions to improving child survival and particularly for critical clinical and epidemiological studies to reduce childhood diarrheal deaths. His studies in Bangladesh, India, Peru and Zanzibar demonstrated that daily zinc supplementation significantly reduced the severity of diarrhea and pneumonia.

Black said that with the new International Center for Maternal and Newborn Health, the department has shown its ongoing commitment to engaging the most pressing and challenging international health problems.

“There are many global challenges in health, and our department continues to identify the important problems and find solutions,” Black said. “This is why we continue to grow, and how we’re able to extend our faculty and recruit more and more students from all over the world.”

For more information on the department and to see a video of Melinda Gates accepting the Global Health Leadership Award, go to http://www.jhsph.edu/dept/ih.