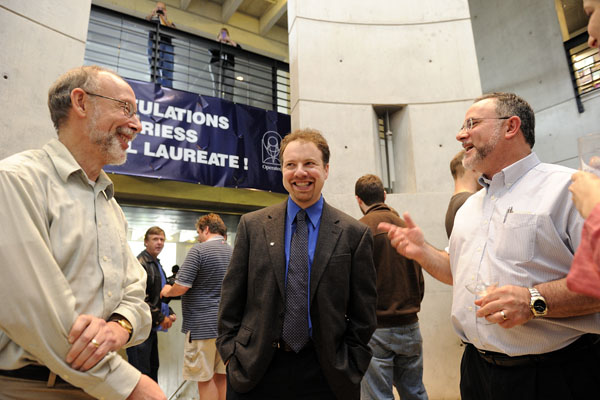 Adam Riess, center, is congratulated by colleagues Julian Krolik and Charles Bennett after winning the Nobel Prize in physics.

In a day chock-full of metaphors used to explain universe-sized science, Adam Riess employed a simple image to convey to his 7-year-old daughter the life-altering award he had just won.

What does winning the Nobel Prize for physics mean? It’s like getting a “great big gold sticker” on your school folder, he told her.

Make that a star-shaped sticker.

On Tuesday, the Royal Swedish Academy of Sciences recognized Riess, the Krieger-Eisenhower Professor in Physics and Astronomy at Johns Hopkins and a scientist at the Space Telescope Science Institute, for his leadership in the High-z Team’s 1998 discovery that the expansion rate of the universe is accelerating, a phenomenon widely attributed to a mysterious, unexplained “dark energy” filling the universe.

For one day, at least, Riess’ world was certainly accelerating.

The big bang started at 5:36 a.m., when Riess received the call from Sweden. Riess’ 10-month-old son had already awakened him, and he thought it was the middle of the night.

“But when I saw the time on my digital clock, I thought this was THE call,” Riess said during a press conference held later that afternoon in Mason Hall on the university’s Homewood campus. “That time is famous [for when the Academy calls]. And then these voices, many of them, told me that this was the Nobel Prize committee, and it was important.”

After an immediate call to his mother and some friends and colleagues to share the news, Riess left for his big day on campus.

When he arrived, his tie still in hand, he was greeted by a group of reporters and photographers. A bottle of champagne awaited him in his office in the Bloomberg Center for Physics and Astronomy, ready for the first of many toasts throughout the day.

Riess, 41, shares this year’s prize with High-z teammate Brian Schmidt, of the Australian National University, and Saul Perlmutter, an astrophysicist at the University of California, Berkeley and the Lawrence Berkeley National Laboratory, whose Supernova Cosmology Project team published similar results shortly after those published by Riess and Schmidt.

The two teams had earlier shared the Peter Gruber Foundation’s 2007 Cosmology Prize—a gold medal and $500,000—for the discovery of dark energy, which Science magazine in 1998 had called the “Breakthrough Discovery of the Year”; and, in 2006, the $1 million Shaw Prize, considered by some to be “the Nobel of the East,” for the same discovery.

Considered the most prestigious prize in the world, the Nobel has been awarded for achievements in physics, chemistry, physiology or medicine, literature and peace since 1901. Riess, Schmidt and Perlmutter will receive medals and diplomas, and the two teams will share a cash award of $1.49 million to be presented at a ceremony in Stockholm in December.

Riess is the 35th person associated with Johns Hopkins as a faculty member, fellow or graduate to win a Nobel Prize. He joins three other Nobel laureates on the university’s current faculty: Riccardo Giacconi, University Professor of Physics and Astronomy, who won the physics prize in 2002; Peter Agre, a 1974 School of Medicine graduate, former professor in the School of Medicine and now director of the Malaria Research Institute in the Bloomberg School of Public Health, who won the chemistry prize in 2003; and Carol Greider, professor and director of Molecular Biology and Genetics in the School of Medicine, who won 2009’s physiology or medicine prize.

President Ronald J. Daniels, who spoke at the press conference, said that it was a proud day for Johns Hopkins.

“There is no greater pleasure for a university president than to celebrate the truly stellar—an appropriate adjective for today—achievements of its very distinguished faculty,” Daniels said. “And today I’m thrilled to be able to join the Nobel committee in honoring the extraordinary accomplishments of Adam Riess.”

Daniels was joined at the podium by Matt Mountain, director of the Space Telescope Science Institute; and Katherine Newman, the James B. Knapp Dean of the Zanvyl Krieger School of Arts and Sciences. Also in attendance were Riess’ wife, Nancy; Greider; a number of Riess’ colleagues; and high-ranking university officials.

They were all there because Riess decided to follow up on what he thought was a big mistake.

Riess and his team had originally set out to use a special kind of exploding star, called supernova, to measure how fast the universe had been expanding in the past and to compare it to how fast it was expanding now. He likened such use of supernovae to pencil marks on the wall to indicate the height of a child over time.

“I assumed I made some mistakes,” Riess said. “I spent a long time analyzing the results but could not find the mistake. I opened it up to the whole team to make it go away, or find out what was wrong. None of us could, and at some point, we realized that maybe this was how the universe was. We decided to write a paper about it.”

Riess led the High-z Supernova Search Team’s study of highly difficult and precise measurements—across 7 billion light-years—that resulted in the remarkable 1998 discovery that many believe has changed astrophysics forever: an accelerated expansion of the universe propelled by dark energy.

These startling observations sent the team back to the idea—first proposed by Albert Einstein but later rejected as his “biggest blunder”—that the so-called vacuum of space might produce a sort of “anti-gravity” energy that could act repulsively, accelerating the expansion of the universe.

During a teleconference with reporters earlier in the day, Riess said that if you think of an accelerating universe as a car speeding down the road, then dark energy could be the gas pedal.

Riess posits that dark energy may account for up to 70 percent of the universe. However, exactly what dark energy is, and how it behaves, remains among the most pressing questions in astrophysics today.

“One of the most exciting things about dark energy is that it seems to live at the very nexus of two of our most successful theories of physics: quantum mechanics, which explains the physics of the small, and Einstein’s general theory of relativity, which explains the physics of the large, including gravity,” he said. “Currently, physicists have to choose between those two theories when they calculate something. Dark energy is giving us a peek into how to make those two theories operate together. Nature somehow must know how to bring these both together, and it is giving us some important clues. It’s up to us to figure out what [those clues] are saying.”

The youngest child of a psychologist mother and an engineer-turned-entrepreneur father, Riess grew up in Warren, N.J. An exceptionally inquisitive boy, he was teaching an adult class in computer programming at the age of 13.

Riess is a 1992 graduate of MIT, where he majored in physics and minored in history. He earned his doctorate in astrophysics from Harvard University in 1996. From 1996 to 1999, the period when the dark energy discovery was made, Riess was a Miller Fellow at the University of California, Berkeley.

Since then, Riess has led rigorous efforts to use the Hubble Space Telescope to increase the precision of the dark energy findings, which are important not only for comprehending the makeup of the universe but also for understanding its history and future and in unraveling other important questions in theoretical physics.

He originally came to Baltimore to join the staff at the Space Telescope Science Institute—home of the science program, grant administration, planning, scheduling and public outreach activities for the Hubble Space Telescope—which is located on Johns Hopkins’ Homewood campus. Riess later joined the faculty in the university’s Physics and Astronomy Department, located across the street.

Riess’ accomplishments have been recognized with a number of prestigious awards. In 2008, he won a $500,000 John T. and Catherine D. MacArthur Foundation Fellowship, also known as a “genius grant.” That same year, he was among the 212 fellows elected to the 228th class of the American Academy of Arts and Sciences. In2009, he was elected to the National Academy of Sciences.

Riess praised his colleagues, past and current, for their work in making his discoveries possible.

“We stand on the shoulders of giants. And nothing could be more true than in the field of astronomy,” he said. “We have to use these incredibly powerful, incredibly complicated instruments, and tremendous facilities that take decades to build, and in some cases require people to risk their lives to put new instruments on them. Some require great political will to get them done. And if we’re really lucky, people like me get to have fun in the end and learn things about the universe.”

The man of the hour was able to thank colleagues and students personally at a celebration held in the afternoon in the first-floor lobby of the Bloomberg Center. Hundreds came to congratulate Riess and revel in the milestone.

Matt Mountain, one of those wearing a constant smile at the event, said that the day was a proud moment for the Space Telescope Science Institute. He said that Riess represented the rich history of collaboration between researchers there and at the Krieger School.

“Of course, we are doubly proud that many of the measurements that Adam and his teams made used NASA’s Hubble Space Telescope,” said Mountain, who called Riess “the bridge” between Johns Hopkins and the STScI.

“As the [school’s] dean, I could not be prouder of Adam Riess and his scientific imagination, and of this whole department,” she said. “I have been wearing a groove in the hillside between my office and this building because I’m coming here so often to celebrate the prizes, awards and recognitions that you have all received.”

Daniel H. Reich, chair of the Henry A. Rowland Department of Physics and Astronomy, jokingly told those gathered “that every so often, there were days when it was fun to be chair.” This was clearly one of those days.

“We are so glad you all came here to celebrate this amazing day, this amazing achievement of Adam Riess and his colleagues,” Reich said.

What followed was a thunderous roar of applause that someday might reach the outer rim of what we now know is an ever-expanding universe.