Registering on site will foster an informal network 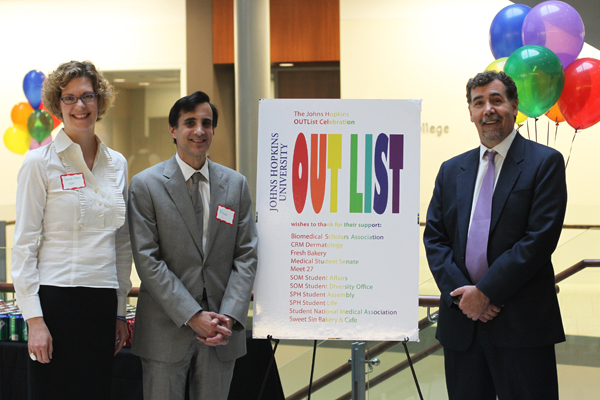 Johns Hopkins invites its LGBT community to log in to “come out.”

On National Coming Out Day, The Johns Hopkins University launched the OUTList, a user-driven online list of university faculty, staff, students, fellows and alumni who voluntarily identify themselves as members of the lesbian, gay, bisexual and transgender community.

To celebrate the launch, the site’s creators hosted a party on Tuesday evening in the School of Medicine’s Armstrong Medical Education Building, decorated with rainbow-colored balloons for the occasion.

University President Ronald J. Daniels attended the event and offered strong words of support for both the site and the LGBT community.

“The very name OUTlist is a bold statement of reclamation,” Daniels said to the roughly 180 gathered. “It is not a list of people exposed by others. Instead, it reflects a community consciously choosing to become ever more visible to one another, to our wider community and to our future students and colleagues.”

Daniels said that while much progress has been achieved in terms of equal rights and acceptance for LGBT citizens, the United States still lags behind other Western nations.

“The inexorable logic of equality demands that we catch up. For this is not a question of tolerance but a question of civil rights. Period,” he said. “At Johns Hopkins, we must continue to cultivate a university community that not only accepts but actively advocates for all our LGBT faculty, staff and students, as well as our patients.”

The OUTList site was championed by Sarah Clever, assistant dean for student affairs at the School of Medicine. The effort received support from many other groups, including the university’s central administration and the Gertrude Stein Society, an organization for lesbian, gay and bisexual members of the Johns Hopkins medical institutions.

Clever had learned of a similar list at the University of California, San Francisco and asked, Why not one at Johns Hopkins?

“This is a very welcoming and tolerant environment, but it may not have the reputation it deserves for being so,” said Clever, who is also an assistant professor in the Department of Medicine. “We want to be a vanguard in terms of support of our LGBT community, and this site speaks to that.”

In his remarks, Daniels noted other LGBT-related efforts currently under way at Johns Hopkins, such as the Bloomberg School of Public Health’s exploring the establishment of an LGBT health certificate program and affiliated research agenda, and the university’s Diversity Leadership Council’s investigation into the creation of an institutionswide LGBT affinity group.

Clever said that she is not aware of another university other than UCSF hosting such an online “out list.” Elmhurst College, a private liberal arts college in Illinois, recently made news by becoming the first college in the United States to ask prospective undergraduates about sexual orientation and gender identity on its application.

In his commentary written for a recent issue of The Chronicle of Higher Education, Elmhurst College President S. Alan Ray explained his school’s action. “We wanted [our LGBT students] to know that they, like all our students, would find abundant resources at Elmhurst to enable them to succeed,” he wrote. “We wanted them to know that they would not feel isolated on our campus because of their sexual orientation or gender identity. On the contrary: We clearly, openly, emphatically want them here.”

In registering on the site, the Johns Hopkins OUTList members are willing to be part of an informal network and perhaps serve as mentors to others, said Carl Streed Jr., a medical student and past co-chair of the Gertrude Stein Society.

The list is also intended to serve as a recruitment and retention tool, Clever said, and display the university’s commitment to diversity and inclusion.

Chris Beyrer, a professor at the Bloomberg School of Public Health and one of the event’s speakers, told those gathered why he chose to put his own name on the list.

Beyrer, who directs the Johns Hopkins Center for Public Health and Human Rights and the Johns Hopkins Fogarty AIDS International Training and Research Program, said that advocating for tolerance requires openness and honesty, which the site’s very existence demonstrates. He mentioned the number of nations that still openly persecute those of same-sex sexual orientation, including the use of jail time and capital punishment in some cases.

“You have to use your own freedom to advance the freedom of others,” he said.

The OUTList alphabetically lists names with the person’s title and university affiliation, and is organized into four categories: faculty and academic; students, residents, postdocs and fellows; staff; and alumni.

The creators of the site took efforts to ensure that those registered would not be listed in major online search engines, or come up online in context with the list.

To join the OUTList, go to web.jhu.edu/outlist. Users must provide a valid JHU email address and JHED password.

To read President Daniels’ remarks in their entirety, go to web.jhu.edu/administration/president/speeches/OUTList.html