Fundraising campaign kicks off with a goal of $2.2 million for 2011 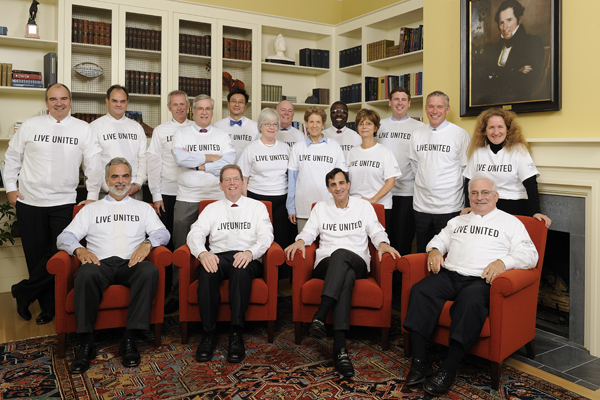 Five is the magic number for Johns Hopkins’ 2011 United Way of Central Maryland campaign, which kicked off last week.

The combined university/Johns Hopkins Medicine financial goal for the campaign is $2.2 million, a total for contributions from all divisions except SAIS, whose donations are reported to the National Capital Area campaign in Washington, D.C., and the Applied Physics Laboratory, which no longer reports its financial goals and results.

The theme of the campaign is “Strive for Five,” which has a number of connotations. An employee can make a pledge of $5 per pay period, recruit five colleagues to donate, increase by 5 percent the amount normally contributed or choose another creative approach.

Furst said that nothing is more basic than adequate food, especially high-quality food.

“We’ve set an ambitious goal to expand sourcing, distribution and accessibility of 4.5 million pounds of healthy and affordable food in low-income neighborhoods in Central Maryland during the next three years,” Furst said.

He said that donations are needed to make this a reality, and that United Way asks for Johns Hopkins’ continued support.

“We simply could not fulfill our role without the perennially generous support of the Johns Hopkins family, for which we are extremely thankful,” he said.

Employees and students of the university and Johns Hopkins Medicine pledged more than $2.1 million to United Way of Central Maryland in 2010.

Jerry Schnydman, executive assistant to the president and secretary of the board of trustees, is chair of the university’s campaign, which runs through Dec. 16.

Ted DeWeese, professor and chair of the Department of Radiation Oncology and Molecular Radiation Sciences at the School of Medicine, is chair of the Johns Hopkins Medicine campaign, which officially wrapped up on Friday, although donations are still being accepted.

The university’s campaign will be rolled out by its coordinators and “ambassadors”—selected employees who will educate others about United Way and can answer questions.

Employees will be able to designate all or part of their donation to the Johns Hopkins Neighborhood Fund, which supports agencies that serve communities in close proximity to Johns Hopkins campuses and have a strong relationship with Johns Hopkins and its employees. It was created in 2007 to assist community-oriented organizations and agencies that may not currently receive United Way funding.

“The need continues to support the efforts of those working hard to improve the quality of life in the communities surrounding our campuses,” Schnydman said. “This is the essence of the Neighborhood Fund. It was developed to assist organizations that serve the people we see and interact with every day.”

Last year, the Neighborhood Fund raised more than $220,000. To be considered, nonprofit organizations must be associated with Johns Hopkins through employee and/or institutional involvement and deliver services within the Live Near Your Work program boundaries and/or a 3/4-mile radius of a Johns Hopkins campus that participates in the annual United Way of Central Maryland campaign. A committee representing a cross section of employees oversees allocation of the fund.

The overall campaign will focus on funding 1,600 nonprofit organizations in Central Maryland that provide assistance in the basic need areas. Among the events highlighting this year’s university campaign will be a leadership kickoff breakfast on Oct. 26, a bingo game and Ravens raffle on Dec. 2 and a Chili Cook-Off/Bake-Off on Dec. 9. All the events will be held in the Glass Pavilion on the Homewood campus.

The campaigns will feature department- and office-level events that seek to educate Johns Hopkins employees on the work of the Neighborhood Fund as well as of United Way of Central Maryland, which supports human service agencies in Baltimore City and its five surrounding counties.

Employees may contribute through a secure and confidential electronic system, which can be found at portal.johnshopkins.edu/unitedway. To access the system, employees will use their JHED ID and password. Those who would rather pledge by paper can download a form from the United Way site or contact their department coordinator.

For more information on the Johns Hopkins campaigns, go to www.jhu.edu/unitedway or www.hopkinsmedicine.org/unitedway, or contact unitedway@jhu.edu or 443-997-7000.