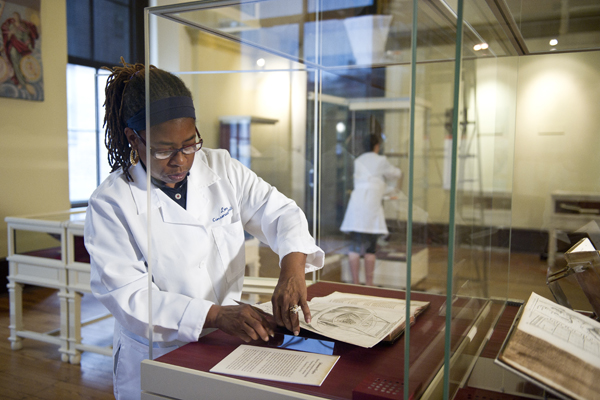 Lena Warren, a book conservator in the Sheridan Libraries’ Department of Conservation and Preservation, sets up a display. Photo: Will Kirk/Homewoodphoto.jhu.edu

Since the acquisition last fall of the Dr. Elliott and Eileen Hinkes Collection of Rare Books in the History of Science by Johns Hopkins’ Sheridan Libraries, scientists and bibliophiles alike have been eagerly anticipating the chance for a closer look at this magnificent collection. With the opening of Eureka! on Sunday, Oct. 23, at the George Peabody Library, the wait is finally over.

Spanning more than 2,000 years of scientific discovery and including books that date from the late 15th century (when Gutenberg’s movable type was a brand-new technology) to the mid-20th century, Eureka! contains highlights from the larger Hinkes collection and provides a kind of roadmap of seminal moments in the history of science.

“The historical sweep and ambition of the Hinkes Collection are staggering, from telescopic visions of the heavens from the ancient world to the most seminal subatomic reflections upon the fundamental nature of matter and energy in the modern era,” said Earle Havens, the William Kurrelmeyer Curator of Rare Books and Manuscripts at the Sheridan Libraries. Havens, along with graduate students Simon Thode and Hanna Roman, curated the exhibition and produced an accompanying catalogue, which has just been released by The Ascensius Press.

The collection, totaling more than 300 items, was assembled over two decades by Elliott Hinkes, an alumnus of the schools of Arts and Sciences and Medicine. Hinkes, who died in 2009, maintained a private practice specializing in medical oncology and hematology in the Los Angeles area for more than 30 years and was an associate clinical professor at UCLA.

“We are extremely grateful to the Hinkes family for their gift,” said Winston Tabb, the Sheridan Dean of University Libraries and Museums. “This collection connects the ideas and wisdom of the past in a very real way to the work being done every day in labs and classrooms at Johns Hopkins University. This exhibit is a fitting tribute to the personal and intellectual generosity of Dr. Hinkes, and we are pleased to be able to honor him in this way.”

The invitation-only opening reception on Sunday will feature remarks by Matt Mountain, director of the Space Telescope Science Institute.