To curb malnutrition, students use yeast to create vitamins in bread 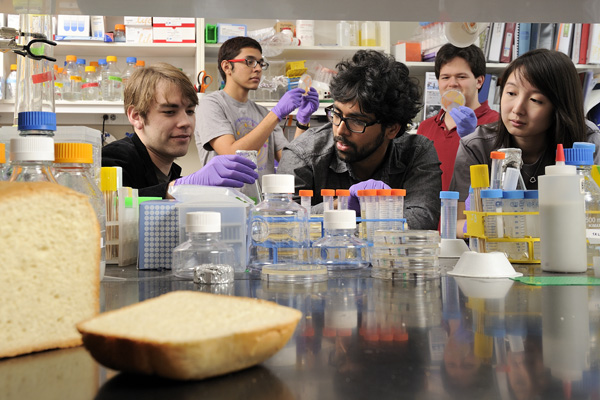 Any way you slice it, a bread that contains critical nutrients could help combat severe malnutrition in impoverished regions. That’s the goal of Johns Hopkins undergraduates who are using synthetic biology to enhance common yeast so that it yields beta carotene, the orange substance that gives its color to carrots—and, when eaten, turns into vitamin A.

The students’ project is the university’s entry in iGEM, the International Genetically Engineered Machine competition. After a regional judging earlier this month, the undergraduates’ project, called VitaYeast, has advanced to the iGEM finals, scheduled for Nov. 5 to 7 at MIT. In the annual contest, students from around the world present projects based on synthetic biology, a burgeoning field in which researchers manipulate small bits of DNA and other biological material to make cells carry out new tasks.

Some of the Johns Hopkins participants say that no matter what happens at the iGEM finals, they will continue to tout their enhanced bread as a relatively simple way to help hundreds of thousands of people who are suffering from malnutrition.

Team member Arjun Khakhar, a junior biomedical engineering major, grew up in Bombay, India, where he saw widespread poverty and malnutrition. “The major problem in developing countries right now is not that people are hungry and starving because they don’t have enough food,” he said. “What people don’t have now is the [right type of] food that they need to survive. Vital nutrients like vitamins are just missing from their diets because they can’t afford fruits and vegetables. That’s what we wanted to provide through VitaYeast.”

Producing a new food to save malnourished people around the globe may sound like an audacious goal for 18 students who haven’t yet picked up their college diplomas. But Khakhar doesn’t think so. “How do I get the idea in my mind that I want to change the world?” he said. “I would ask, How can you not have the idea that you want to change the world?”

To curb global malnutrition, Khakhar and his teammates envisioned an enhanced starter dough that could be shared easily and cheaply among large groups of impoverished people. The bread baked from this dough could avert health problems that occur when vitamins and other nutrients are missing from their diets. Such health problems can be serious. The World Health Organization has described vitamin A deficiency as the leading cause of preventable blindness in children.

Yeast, which makes bread rise, does not normally produce vitamins. To make this happen, the students, representing a variety of science majors, had to genetically tweak the single-cell microbes. The team members figured out how to add to yeast cells a certain DNA sequence that triggered a series of biochemical reactions that produced beta carotene, which the body turns into vitamin A. They presented that development at the iGEM regional contest and are continuing to work on yeast that also produces vitamin C, another crucial nutrient needed in impoverished areas.

As they worked on the VitaYeast project, the students were advised by Johns Hopkins faculty members, including Jef Boeke, a leading yeast expert who is a professor of molecular biology and genetics at the School of Medicine. “One of the great things about iGEM teams, which are mostly made up of undergraduates, is that those students, frankly, will not believe that something is impossible,” Boeke said. “If you tell them that something is impossible, they will go off and do it. I find that to be very exciting.”

Working in lab space provided by Boeke and other faculty members, the iGEM students solved the science challenges and produced samples of their enhanced dough. But would VitaYeast yield bread that looks and smells good enough to eat? As all good cooks know, the proof is in the pudding—or, in this case, the bread basket. To find out, the students purchased a bread-making machine, found a simple recipe online and turned their lab into a makeshift kitchen. “We wanted to simulate the process that a regular person might go through to bake bread,” said team member Steffi Liu, a junior biomedical engineering major from Edison, N.J. “The only thing that’s different in the recipe is that we substituted our vitamin A yeast for the normal dry packaged yeast.”

The resulting bread, she said, “looks exactly the same as normal bread. Definitely the same smell! The lab smelled amazing after we baked the bread. Everybody wanted a bite of it. But obviously we can’t do that.”

Because the lab bread contains a genetically engineered ingredient that has not undergone safety testing or received approval from government regulators, no one is permitted to eat it. But the students are encouraged by the tempting aroma and traditional breadlike texture and appearance.

As part of the project, team member Ashan Veerakumar, a senior neuroscience major from Toronto, will survey Baltimore-area residents about whether they would eat genetically modified food, particularly if it could improve their health. “The thing we’re trying to find out here,” Veerakumar said, “is whether our project is something the public will accept.”

He and some of the other team members also are looking for outside funding to continue pushing the VitaYeast project forward. Yet before VitaYeast bread can make its way to malnourished people, it must overcome many hurdles, including animal testing and rigorous regulatory reviews.

Still, faculty adviser Boeke is not betting against his student scientists. “Could this notion of releasing a genetically modified organism in a Third World country ever happen?” he asked. “Personally, I think the answer is yes.” Some of the iGEM students, Boeke said, “were ready to rush off and do it right away, and we had to restrain their enthusiasm.” Another faculty member, who is a bioethicist, was called in to urge the students to be more patient in pressing toward their goal. “She’s helped the students understand what the steps are needed to get to that point,” Boeke said. “That will certainly be a multiyear process, at best. But I think it could happen.”

To learn more about the VitaYeast project, go to 2011.igem.org/Team:Johns_Hopkins.