The arts: What is their role?

Dialogue begins on place of arts in research institutions 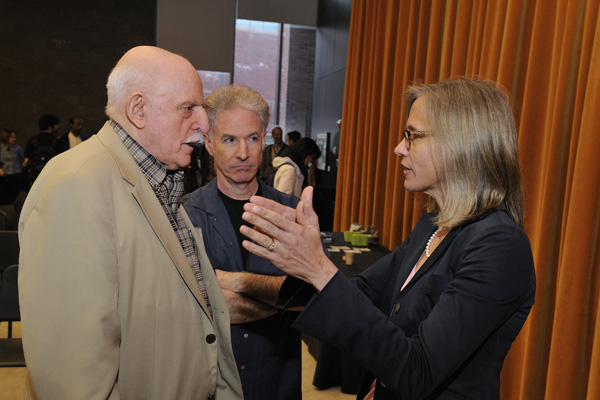 In the battle of right brain vs. left brain, The Johns Hopkins University is asking: Why not use both?

The past, present and future of the arts at Johns Hopkins came squarely into focus earlier this month as arts program leaders from other major universities visited the Homewood campus to discuss the merits of blending a full palette of creative endeavors into a traditionally research-heavy environment. The consensus was that the arts are essential.

Nearly 200 university faculty, staff, students, alumni and local arts leaders filled the Mattin Center’s SDS Room on Friday, Oct. 14, to take part in the Arts Futures Seminar, the 20th in a series of Futures Seminars that the Krieger School of Arts and Sciences began in September 2010.

For this seminar, participants came to learn about selected arts programs at Johns Hopkins and listen to representatives from Stanford, the University of Chicago and MIT, universities that have invested millions of dollars in arts-related programs. Both Stanford and Chicago have launched signature arts initiatives that have included substantial investments in new facilities, programs, community outreach efforts and faculty. Also participating was Mariet Westermann, vice president of the Mellon Foundation, who gave a keynote address.

Katherine Newman, the James B. Knapp Dean of the Krieger School of Arts and Sciences, said that this particular Futures Seminar had a purposefully wider scope than previous events in order to underline the desire for the arts programs, and the Peabody Institute, to join together.

“It seemed appropriate for us to consider both the individual [arts] programs and where they are going and the intersection between them,” Newman said. “Since the Krieger School has not invested deeply in the arts, we need a more comprehensive road map to figure out what will permit them to flourish. Concentrating on the larger territory of the arts rather than only the component parts seemed wise.”

To set the stage, the seminar invited leaders of arts initiatives at the three peer institutions to present “case studies” of their successful arts endeavors.

Stanford’s arts initiative, launched in 2006, created new arts courses, added arts elements throughout the curriculum, strengthened existing programs and expanded partnerships among its divisions and with private institutions in the Palo Alto, Calif., area. Stanford plans to create an “arts district” on its main campus, anchored by the existing Cantor Arts Center with the addition of a new performing arts center, a new building for its Department of Art and Art History, and several new classroom, studio, rehearsal and performance spaces.

The University of Chicago recently launched its own arts initiative, the centerpiece of which is a new 10-story, 184,000-square-foot arts center designed by Tod Williams Billie Tsien Architects, which also designed the Mattin Center at Johns Hopkins. The $114 million facility, which is set to open in the spring, will house a 474-seat performance hall, a 100-seat proscenium theater, a public art gallery, a 150-seat black box theater, a 129-seat film screening room and more than 90 individual rehearsal rooms, workshops, studios and classrooms.

The University of Chicago’s long list of arts-related efforts include the establishment of an annual program of residential arts fellowships, new professor of practice in the arts positions and the launch of a UChicago Arts Pass program that allows students entry into local museums and music halls.

Earlier this year, MIT released a white paper that emphasized that arts have been a core component of the educational mission of MIT and will play an even more significant role in the future. For the university’s 150th anniversary, MIT hosted a Festival of Art + Science + Technology to celebrate the university’s multidisciplinary approach to art that included a “robotic” opera performance using a chorus of robots and a musical chandelier, a laser-light music show and kinetic illuminated sculptures.

Winston Tabb, Sheridan Dean of University Libraries at Johns Hopkins and co-chair of the Homewood Arts Task Force, said that he and many colleagues were inspired by both what they heard and the packed house at the Mattin Center.

“We were all very impressed by what Stanford, Chicago and MIT have done to advance the arts on their campuses in recent years,” Tabb said. “And we were equally impressed and touched by the large number of students and recent alumni who attended our seminar, asking very good questions and exhorting Johns Hopkins to move more rapidly to increase our focus on the arts, not as a replacement for other academic offerings but as a necessary complement to them.”

In her keynote address, Westermann said that the “arts are a way of learning and discovering the world and ourselves, and that reality needs to be reflected more robustly in academic offerings.”

Johns Hopkins is no stranger to the arts. The university has the Homewood Art Workshops, an undergraduate Theatre Arts and Studies program, a dance program, the nationally renowned Writing Seminars, Film and Media Studies, the Program in Museums and Society and the Peabody at Homewood program. In terms of facilities, the Homewood campus has the Mattin Center, which includes the black box Swirnow Theater; the 125-seat Arellano Theater; the 1,100-seat Shriver Hall Auditorium; the 320-seat Schafler Auditorium; and the 106-seat Merrick Barn, home to the Theatre Arts Program.

Shortly after she became dean, Newman established the Arts Task Force, aimed at investigating the possibility of growing the arts on the Homewood campus. The task force is co-chaired by Tabb and Jeffrey Sharkey, director of the Peabody Institute.

At the seminar, Craig Hankin, director of the Homewood Arts Workshops, spoke about the ever-increasing popularity of the program’s courses, and the long waitlists. The program had 165 students on waitlists just this past term. The courses are all offered as electives, as there is currently no visual arts major or minor at Homewood.

In his opening remarks, Hankin told those gathered how happy he was to be speaking about the arts to such a large crowd.

“I’m in my 31st year of teaching here at Johns Hopkins, and it’s no exaggeration to say that I’ve waited 31 years for this day,” Hankin said, drawing a roar of applause. “I would just like to thank again the efforts of Winston Tabb, Dean Katherine Newman, Eric Beatty and everyone here for putting this day together. I see great things on the horizon for all of us here.”

Beatty, director of Homewood Arts Programs, said he’s heard a chorus of student voices pleading for more arts offerings on campuses. In his talk, he read aloud letters from students exalting the role of the arts and how taking drawing, dance and theater courses enhanced their experience at Johns Hopkins.

“We have amazing talent and extraordinarily devoted faculty and students,” she said after the seminar. “What we don’t have in most of our programs is a critical mass of full-time teaching professors and the space to accommodate all of the students who would like to participate, whether they are primarily interested in the arts or interested in adding an arts emphasis to their majors in the humanities, social sciences or science.”

Newman’s efforts to make the seminar a reality and focus more attention on the arts were lauded by both Hankin and Beatty.

“The artists in our community have waited a very long time to be recognized for the extraordinary contribution they make to Johns Hopkins,” Newman said. “Theirs has been a labor of love, and to see them assembled in one place and celebrated by exceptional leaders from the Mellon Foundation, MIT, Stanford and the University of Chicago was truly gratifying.”

Newman said the School of Arts and Sciences plans to host an external review committee of practicing artists and academic experts in music, dance, theater and visual media from Brown, Duke, Columbia and the California Institute for the Arts later this month.

“They will examine our programs and advise us on how we might deepen and extend our work,” she said.

The Homewood Arts Task Force will later submit a formal report, which might include the recommendation of a permanent arts leadership structure.

Sharkey said that he hopes Johns Hopkins can build on this momentum and enthusiasm to expand its arts programs. He said that Peabody plans to play a vital role in any effort.

“We’ve long felt we have a lot to offer,” he said. “Peabody wants to spread its strengths to the Homewood campus and partner with Krieger and any signature arts initiatives of the university’s current capital campaign.”

He gave the example of a possible bachelor of arts in music degree program, offered jointly by the School of Arts and Sciences and Peabody.

The series will ultimately allow each department, program and discipline to examine the state of its field and where it’s headed in the coming decade.

The next Futures seminar will focus on mathematics, and be held from 3 to 6 p.m. on Thursday, Oct. 27, in Mason Hall Auditorium.