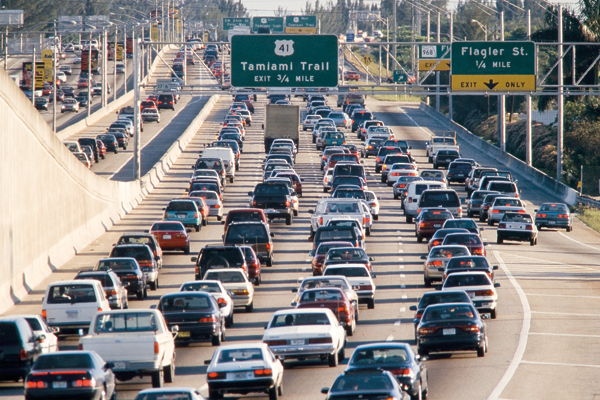 Imagine trying to plan for the evacuation of a populated coastal area without a major bridge to safety, or having to adjust an evacuation if a wildfire suddenly rendered an interstate highway unusable. State and local emergency management agencies need accurate, reliable evacuation plans covering these different scenarios, but creating those plans often requires complex and expensive study results that can’t rapidly be updated to reflect developing situations.

“We were tasked by the Department of Homeland Security in 2009 to find out what the emergency management community in the southeastern U.S. [an area frequently hit by hurricanes] wanted in terms of technology,” explained program manager D.J. Waddell, of the Homeland Protection Business Area, about the project’s beginnings.

The NSTD team learned that the most requested capability was the ability to “draw an area on a map and tell me how long it will take to evacuate the people from there.” To simplify that task into a stand-alone and functioning model, Waddell said, “we had to constrain this for populations using passenger vehicles,” which is the primary way that Americans evacuate most areas during a disaster.

The heart of the geographic information system–based RtePM is the Dynamic Clearance Time Calculator, which uses three sets of data to estimate how an evacuation plan will unfold. Those three data sets—roadway capacity, demographic and density information, and human behavior (the least-predictable variable)—are combined into an easy-to-use graphical interface that requires little user training and offers enormous flexibility. New simulations and analyses can be achieved by simply drawing a line around an area, selecting from variables such as side streets and specific neighborhoods, and rerunning the calculator.

For a small geographic area, performing a new simulation in RtePM will be finished in the time it takes to refresh the screen; a simulation for a densely populated area can take up to two hours. “We ran a large scenario for a Category 4 hurricane in the Houston/Galveston, Texas, area,” Waddell said, “with a population of 1.6 million, and 922,000 of them evacuating, in a bit under two hours.” Similar results were obtained for the Hampton Roads region of Virginia. (For the largest metropolitan areas, Waddell said that the team would need to include models of public transportation and pedestrian evacuations.)

While the system is not yet fully real-time, owing in part to a dearth of real-time traffic-monitoring data, RtePM can generate new simulations quickly enough to be effective in most cases, and has drawn praise from evacuation analysts for its current capabilities.

Waddell said that having veteran emergency managers, including Russ Strickland, a former senior official at the Maryland Emergency Management Agency, work side by side with the project’s technical lead, Dave George, helped RtePM gain quick currency with the evacuation community. “We pair subject matter experts with our technical leads,” Waddell said, “and it helps us cut through miscommunication early on. We can focus on what the planners need, not in terms of technology but in terms of functionality.”

RtePM was originally designed for the southeastern United States, but it was soon getting demonstration requests from across the country, including San Diego, where wildfires threaten from June through October.

“In San Diego, we learned that we needed to fine-tune which roads get included in the simulation for a locality,” Waddell said. “Ordinarily, we leave off smaller side roads because they don’t connect to major arteries. In San Diego, because of the terrain, they’re the only roads that do connect to those arteries.

“Another regional difference in San Diego is that, understandably, people won’t leave their horses behind in a wildfire,” Waddell continued. “During the most recent wildfires there, 20,000 people and 3,000 horses were moved. So we have to account for people going to their horses, and then heading for safety.” Requests for RtePM information and trial use have also come from the Pacific Northwest National Laboratory in Richland, Wash., and from planners for Super Bowl XLVI, to be held in February 2012 in Indianapolis.

RtePM is still in development for the Department of Homeland Security, with a target delivery date of April 2012 for a transition version that will be able to make the jump to a real-world tool for municipalities ranging in size from large cities to rural counties.

“The idea is for this to be affordable,” Waddell said. “It’s all done with open source software, it’s Web-based, and it uses road-network data sets that local agencies can access for free, thanks to DHS initiatives. Hurricane evacuation planners update their plans every eight years based on data provided by the U.S. Army Corps of Engineers; with our tool, they could do it monthly, and for less cost. The corps has worked closely with us during RtePM development and testing, and [it has] initiated discussions with DHS for long-term maintenance of RtePM.”