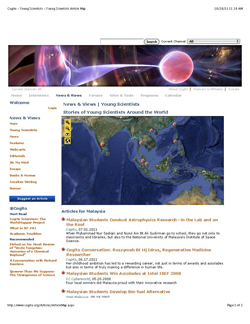 Cogito.org, a website and online community for gifted math and science students, won the prestigious Science Prize for Online Resources in Education (SPORE) Oct. 27 in recognition of its success at bringing students from all over the world together to “geek out” about a wealth of topics ranging from extrasolar planets to epigenetics.

Cogito was developed by the Johns Hopkins Center for Talented Youth with help from eight partner organizations serving gifted pre-college students, and generous support from the John Templeton Foundation. Launched in 2006, the site includes profiles of young scientists, interviews with guest experts from all fields of science and math, blogs and a community section for Cogito members. Cogito is targeted to top students between the ages of 13 and 18.

“We’re proud of Cogito for so many reasons,” said Patricia Wallace, CTY’s senior director of information technology and CTYOnline. “The site brings these very bright students together to interact with one another and with experts who are on the cutting edge of scientific discovery.”

The award, which recognizes the best Internet resources in science education, is presented by Science magazine and its publisher, the American Association for the Advancement of Science, both highly regarded science resources. Past winners include MIT Open Courseware, a site that makes teaching materials used in MIT undergraduate and graduate courses available on the Web for use by the general public, and Science Buddies, a site that assists K-12 students and parents with science fair ideas and projects. AAAS invited the Cogito team to contribute an essay about the site, and the article appears in the Oct. 28 issue of Science.

What’s distinctive about the free site, according to Cogito’s managing editor, Kristi Birch, is how it creates community among students who might not otherwise have a way to share with their peers their love of learning. “It’s not always cool to be smart, and it may not be socially acceptable at school for these students to have these kinds of conversations about math and science at such high levels,” Birch said. “Cogito is the one place you can go to get that social and intellectual connection.”

For student Philip Streich, who was lauded by Discover magazine in 2008 as one of the top five young scientists under 20, Cogito helped nurture his early interest in science. “Living on a farm in rural Wisconsin, I’d had no opportunity to hear about and communicate with other kids my age who were as passionate as I was about science,” he said. “Cogito brought me into a scientific community that I would otherwise never have had a chance to be part of. It motivated me to start doing research myself.”

Streich isn’t the only student who feels this way about the online community, says Science editorial fellow Melissa McCartney. “There is a common theme in all of [the users’] feedback: Student participation in Cogito resulted in a demystification of scientists and what they do, as well as increased ability for students to picture themselves doing research alongside them someday.”

Filed under Around Hopkins, Center for Talented Youth