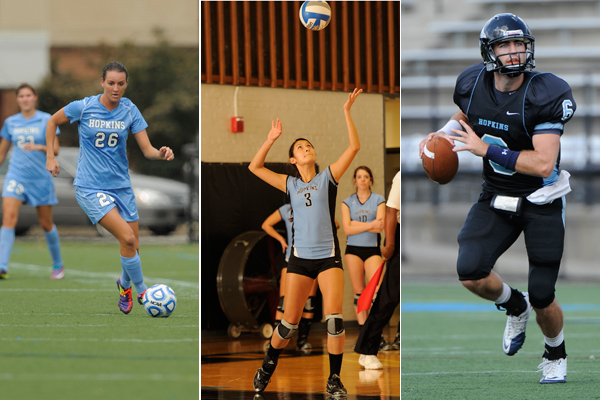 Fourteen minutes into a recent home game versus Gettysburg College’s women’s soccer team, senior Johns Hopkins midfielder Ava Scheininger took a quick cross from sophomore Pamela Vranis and stretched out with her right foot to deftly direct the ball on goal, some 15 yards out.

The ball sailed to the bottom left-hand corner of the Gettysburg goal, hit the post and bounced in. The goal turned out to be the game-winning score and sealed an unblemished regular season for the Blue Jays.

Whether an intentional shot-on-goal or not—Scheininger surely would take credit for it—the fortuitous flick and bounce illustrated how nearly everything is falling into place for Johns Hopkins’ varsity sports teams this semester.

The women’s soccer team finished the regular season 17-0 overall, the first perfect season in the program’s history, and is ranked No. 4 in the nation. The men’s soccer team has collected four straight wins, and goes into tournament play with a 10-4-3 record.

The women’s cross country team recently captured the Centennial Conference crown for the fourth straight year and next heads to the NCAA Mideast Regional Championships in Center Valley, Pa., on Nov. 12. The ladies are currently ranked No. 11 in the Women’s Cross Country National Coaches’ Poll.

The Johns Hopkins football squad headed into last weekend’s home game vs. Franklin & Marshall 8-0 and ranked No. 11 in the country, the highest in-season ranking in team history.

Wanting a piece of history themselves, the women of the Blue Jay volleyball team ended the regular season with a 23-4 record and a perfect 10-0 slate at home, another program first.

Tom Calder, director of Athletics, said that while he’s seen his share of success in his 24 years at Johns Hopkins, he can’t recall another fall with so many Blue Jay teams flying high.

“To say it’s been exciting around here is an understatement,” Calder said. “Last year was great and pretty special, but I can’t remember a season where we went into conference tournaments with this many No. 1 seeds.”

Calder mentioned a recent JHU coaches meeting where he had the pleasure of listing the accomplishments and records of all the fall varsity teams. After he was done, the coaches gave each other a round of applause.

Calder said that they deserved it.

“The coaches have all done an amazing job. The hardest thing is to take a one-game-at-a-time approach, which they all seem to be doing,” he said. “It’s so hard to do when you’re on a roll, like how the football and soccer teams have been, but they’ve managed to keep the players focused on their next opponent.”

The Blue Jays haven’t just been winning, they’ve been routinely trouncing opponents and setting many school records along the way.

The women’s soccer team has the fifth-best offense in Division III, at 4.53 goals per game. It’s won two games by scores of 6-0, and two by 8-0 margins. Leading the way is senior Erica Suter, who this year became the team’s all-time leader in points, goals and assists.

Head coach Leo Weil, now in his 20th season, said that despite losing such standouts as Jenn Paulucci and Allie Zazzali to graduation, he saw the potential for a more well-rounded, improved team. Weil recruited a talented freshman class, led by Hannah Kronick, who has scored 18 goals this season, two short of the freshman record.

“We have plenty of offense, lots of people who can score,” Weil said. “One of our goals going into the season was to put a lot of pressure on every team’s defense. I wanted to make it hard to prepare for us. If teams pack it in, we can be patient and wait for our chances; if they want to push up to draw us offside, we can take advantage of that, too.”

Weil said that in a season full of bright moments, a particular highlight was a 5-1 victory over previously undefeated Haverford College.

“We wanted to send a message that game that it was going to be tough for anyone to beat us,” he said. Message sent.

With confidence sky high, Weil said that the trick is keeping everyone focused and grounded.

“It’s easy to get overconfident,” he said. “You have to be careful. You can’t presume we are going to be successful just taking the field.”

Jim Margraff, JHU’s football head coach, is taking a similar approach with his squad. He recently borrowed a phrase from New England Patriots head coach Bill Belichick and told his team to “ignore the noise,” referring to the attention and praise the team has received.

“I tell them that the goal is simply be 1-0 every week,” said Margraff, now in his 22nd season as head coach. “Focus on the here and now.”

His philosophy appears to be working.

The Blue Jays have won a school-record 13 straight games dating back to last season, the third-longest active winning streak in all divisions of NCAA football. The team clinched a share of the Centennial Conference title and a spot in the upcoming NCAA playoffs with its win last week over Ursinus.

The team averages 46.5 points per game, led by the third-ranked passing attack in the nation. Equally impressive, it gives up only just over 9 points a game.

The team routed Moravian 41-0, and four weeks later put up a basketball score vs. Gettysburg, winning 83-21. In the Gettysburg game, senior quarterback Hewitt Tomlin threw for 501 yards and seven touchdowns, both school records. Tomlin further etched his name in the Centennial Conference record book in the victory, becoming the league’s career leader in total offense and 300-yard passing games. Tomlin has thrown for 1,756 yards this year to date, with 19 touchdowns against only two interceptions. He’s averaging 291 yards a game.

The team even survived the loss of Tomlin, due to injury, for several games and never skipped a beat.

Margraff said that going into the season, he thought this could be a very special team.

“To be honest, our expectations were quite high,” he said. “We had a large number of seniors returning, and some very talented freshmen. And when your best players are your hardest workers, that gives you a good foundation, and sets you up for success.”

The Johns Hopkins volleyball team currently has a 17-match home winning streak and a 13-match overall undefeated streak, both team records. This season marked the first time in program history that the volleyball team went undefeated in conference play.

It ended the regular season with a 23-4 overall record, collecting 18 shutouts along the way.

Senior Melissa Cole is solidifying her place in the Johns Hopkins record books with her outstanding final season in a Blue Jay uniform. Cole is currently second on the team in digs (256) and kills (219) and is nearing the top 10 in both categories for her overall career.

With conference tournament action under way and NCAA tournaments just around the corner, Calder said he’s hoping that fans will turn out to see some record-setting teams in action.

To see this past weekend’s results and for upcoming schedules, go to www.hopkinssports.com.