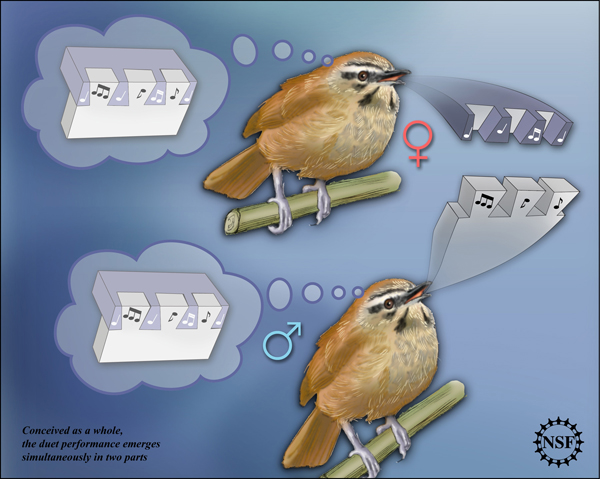 When legal commentator Nancy Grace and her partner danced a lively rumba to Spandau Ballet’s 1980s hit True on Dancing With the Stars, more was going on in her brain than worry about her footwork.

Deep in Grace’s cortex, millions of neurons were hard at work doing what they apparently had been built to do: act and react to partner Tristan MacManus’ movements to create a pas de deux that had the dancers functioning together (for the most part) like a well-oiled machine.

That is because the brain was built for cooperative activity, whether it be dancing on a reality show, working in an office or constructing a skyscraper, according to a study led by Johns Hopkins behavioral neuroscientist Eric Fortune and published in the Nov. 4 issue of the journal Science.

“What we learned is that when it comes to the brain and cooperation, the whole is definitely greater than the sum of its parts,” said Fortune, an associate professor in the Department of Psychological and Brain Sciences in the Krieger School of Arts and Sciences. “We found that the brain of each individual participant prefers the combined activity over his or her own part.”

In addition to shedding light on ourselves as social and cooperative beings, the results have important implications for engineers who want to be able to program autonomous robots to work effectively as teams in settings such as combat.

But Fortune’s work didn’t involve androids or take place on a battlefield. Instead, he and his team took to the cloud forests of Ecuador, on the slopes of the active Antisana volcano. Why? It’s one of the only places in the world where you can find plain-tailed wrens. These chubby-breasted rust-and-gray birds, who don’t fly so much as hop and flit through the area’s bamboo thickets, are famous for their unusual duets. Their songs—sung by one male and one female—take an ABCD form, with the male singing the A and C phrases and the female (who seems to be the song leader) singing B and D.

“What’s happening is that the male and female are alternating syllables, though it often sounds like one bird singing alone, very sharply, shrilly and loudly,” said Fortune, who spent hours hacking through the thick bamboo with a machete, trying to catch the songbirds in nets. “The wrens made an ideal subject to study cooperation because we were easily able to tape-record their singing and then make detailed measurements of the timing and sequences of syllables, and of errors and variability in singing performances.”

The team then captured some of the wrens and monitored activity in the area of their brains that controls singing. They expected to find that the brain responded most to the animal’s own singing voice. But that’s not what happened.

“In both males and females, we found that neurons reacted more strongly to the duet song—with both the male and female birds singing—over singing their own parts alone. In fact, the brain’s responses to duet songs were stronger than were responses to any other sound,” he said. “It looked like the brains of wrens are wired to cooperate.”

So it’s clear that Nature has equipped the brains of plain-tailed wrens in the Andes of Ecuador to work cooperatively, and to prefer “team” activities to solo ones. But what does that have to do with people?

“Brains among vertebrate animals—frogs, cats, fish, bears and even humans—are more similar than most people realize,” Fortune said. “The neurotransmitter systems that control brain activity at the molecular level are nearly identical among all vertebrates, and the layout of the brain structures is the same. Thus, the kinds of phenomena that we have described in these wrens is very relevant to the brains of most, if not all, vertebrate species, including us humans.”

This research was supported by the National Science Foundation.

To listen to the Ecuadorian plain-tailed wrens’ songs and see short videos of the birds, go online.

Eric Fortune and his lab\