Navigating the minefield of inner-city adolescence 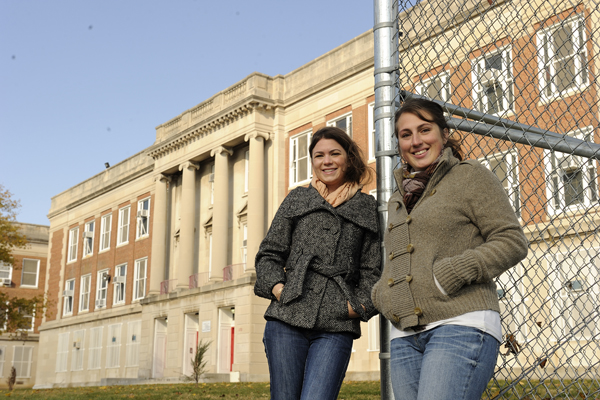 Jennifer Fishkin of SAIS and Laura Castelli of American University at Eliot-Hine Middle School, home this year for PeaceKidZ, a for-credit SAIS course founded by I. William Zartman, a renowned expert in conflict resolution and negotiation. Photo: Will Kirk/Homewoodphoto.jhu.edu

Julia Romano called it “the camp game.” The 10 teenage students at SunRise Academy day school in Washington, D.C., were asked to break up into two groups and negotiate joint use of a co-owned campground, replete with swimming hole, picnic area, cabins and open spaces.

Do they cut the camp in half? Share use of the areas? Who gets to use it on the weekends? Who sleeps where?

Romano had played the same game in a conflict management class at SAIS, and the marathon session had lasted nearly seven hours.

The SunRise Academy students came to an arrangement within a half-hour. The discussion got heated at times, but all in good fun. Romano said that the students, most of whom had academic or disciplinary issues, could put the game in perspective.

“These students negotiate difficult circumstances each day, even what city blocks to safely walk down on the way to school,” Romano said. “Many of these kids don’t have easy lives.”

Romano was at SunRise Academy as part of PeaceKidZ, an after-school program founded in 2002 by I. William Zartman, a renowned expert in conflict resolution and negotiation who for decades directed the Conflict Management and African Studies programs at SAIS.

Zartman, now a professor emeritus, says that he wanted students in the school’s Conflict Management program to apply some of the knowledge and principles they were learning on an international scale in class to the conflicts faced daily by kids, including schoolyard fights, peer pressure, disagreements with parents and anger-management issues.

“I never thought we could go in and change their behavior and make them all become angels, but perhaps we could just make them more aware of what is going on around them,” Zartman said. “Is there a conflict corner in your school? Why? What happens there, and can it be avoided?”

The SAIS program, a for-credit course offered in both the spring and fall semesters, is designed to introduce conflict resolution to students ages 12 to 18 in both relevant and fun ways. Most of the children who participate are selected because they face disciplinary issues, have been suspended for various reasons or are just more prone to getting into conflict situations.

The PeaceKidZ (the Z is a nod to Zartman) counselors role play, play games and use videos to elicit responses from the students. They work in groups of two and three and meet with the students once a week for nine weeks. The sessions last from 45 minutes to one hour.

Romano said that many of the kids she dealt with came from broken families, had absent fathers or had even seen fellow students seriously injured in gun or knife attacks. One student she worked with missed a few sessions and she later found out that he had been stabbed in the stomach after school.

“Some of them literally negotiate life and death,” said Romano, a 2009 SAIS graduate who is now working toward a doctorate at the Chicago School of Professional Psychology. “We try to help them understand that they have a lot more control over their reactions and lives than they think.”

Romano is originally from Los Angeles and is white and blonde. She said it took about a month to earn a level of trust from the students, who are mostly from inner cities and African-American.

“We had our own negotiation of space,” she said. “They also all assumed we were getting paid for our time with them. When we told them we weren’t, they said, ‘Then why the heck are you here?’ We said we just wanted to learn and share with you guys, and that changed their perspective somewhat.”

SAIS student Jennifer Fishkin said that many of the children deem the use of violence an appropriate response. “It’s difficult for them to value using nonviolence over violence, how to take the time to not hit someone or lash out,” said Fishkin, who is working with seventh-graders at Eliot-Hine Middle School, this year’s location for the program.

In one session this semester, the SAIS students put up maps of the world and the middle school and asked the students to mark where conflicts start. On the school map, many denoted the lunchroom, a frequent scene of food fights. “This is an example of a conflict that escalates,” Fishkin said. “And we asked them if they could change anything so that it wouldn’t.”

The program teaches the adolescents the “three R’s” of confliction resolution: recognize, respect and resolve.

In the first stage, the children define what a conflict is and learn to identify conflicts in their daily lives, such as prejudice and stereotypes. In the next phase, they learn to better identify their emotions and appreciate the role that emotions play in everyday conflicts. Lastly, they learn conflict resolution skills and strategies.

The goal is to promote the power of communication and have the participants develop a better awareness of self and others.

“They negotiate identity issues all the time,” Romano said. “What group or clique of kids do they want to be part of or associated with? I felt it was my goal as a teacher to help create the space to experience that understanding and use it to their advantage.”

The students have opportunities for self-reflection in the journals they write and the art they are sometimes asked to create. Romano remembers one student drawing a picture of a sailboat with a black outer rim and a blood-red interior.

“Psychologically, that one image contained a lot,” she said.

In one PeaceKidZ scenario, students are presented with someone rushing toward them in an aggressive mode. How do they respond? They are also asked about conflicts at home, even relatively minor issues such as sharing items with a sibling.

“We try to put things in ‘I’ terms,” Zartman said. “This is what you want, and this is what I want. State your position and let’s work it out together. Instead of resorting to hostility, you back off.”

The students, Zartman said, often worry about “loss of face.”

“When someone challenges you and you back off, that can be labeled as weakness,” he said. “We try to help them learn how to handle the situation and that kind of attitude. You back off strongly and tell them, I’m not going to fight with you—there are better ways to handle this. Maybe it’s walking away, but not running away.”

The program has been implemented in a number of institutions in the D.C. area, including Francis C. Hammond Middle School, Andrew Jackson Middle School, Renaissance Christian Academy and the District of Columbia YMCA, as well as SunRise Academy and Eliot-Hine.

This semester, eight students are enrolled in the course, six from SAIS and two from American University.

Zartman said that the PeaceKidZ experience is often an eye-opening one for the SAIS students. He said that roughly one-third of the students are internationals and are “bowled over” when they see the American school system firsthand.

“No matter how much we prepare them, they are still very surprised to see how different it is from what they are accustomed to,” he said. “They see the relative lack of barriers between students and teachers, and teachers relating to students.”

Romano said that her time with PeaceKidZ was one of her most valuable experiences at SAIS. “I was able to be so deeply hands-on with these kids,” she said. “I thought I was going into a classroom setting to resolve conflicts. They taught me a heck of a lot more.”

She’s kept in touch with one student and attended a play he co-wrote, which contained many conflict mangement themes. He is attending George Mason University and doing well, she said.