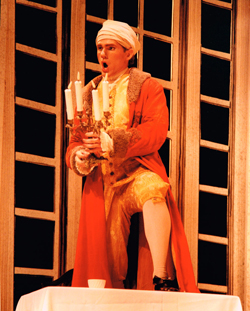 The Peabody Opera Theatre will present Stravinsky’s The Rake’s Progress this weekend in the historic Baltimore theater now known as the Patricia and Arthur Modell Performing Arts Center at The Lyric.

The inaugural season of Lyric Opera Baltimore—the successor to the Baltimore Opera Company, which ceased operations in 2009—opened on Nov. 4 with La traviata and includes Le Nozze di Figaro and Faust. As a 20th-century work sung in English, the Peabody production of The Rake’s Progress is a distinctive complement to the opera company’s season.

“The mounting of our fall opera in the newly modernized 2,500-seat Lyric marks the beginning of a true partnership,” said Jeffrey Sharkey, director of Johns Hopkins’ Peabody Institute.

The new, fully staged production of The Rake’s Progress is directed by faculty member Garnett Bruce, who recently directed Turandot for San Francisco Opera and Lyric Opera of Kansas City and Lucia di Lammermoor for The Dallas Opera. Luke Cantarella, head of scene design at the University of California, Irvine, is the production designer. Hajime Teri Murai, the Ruth Blaustein Rosenberg Director of Orchestral Activities at Peabody, will conduct the Peabody Symphony Orchestra.

The Rake’s Progress, with a libretto by W.H. Auden and Chester Kallman, had its premiere in 1951 at the Venice Biennale. It was inspired by a series of eight bitingly satirical paintings by 18th-century English artist William Hogarth, one of several groups depicting “modern moral subjects” that became popular sets of engravings. The word “progress,” usually associated with a royal tour or a religious journey—as in The Pilgrim’s Progress—is here the tragicomic descent of Tom Rakewell into sin and madness.

Noting that the opera is “very contemporary [and] not a costume drama,” Bruce explains that “Stravinsky was challenging himself to use classical structures in a modern society.”

The production also features a chorus of graduate singers from the Conservatory. “They are all soloists in their own right, taking roles ranging from whores in a brothel to madmen in Bedlam,” said Roger Brunyate, artistic director of the Peabody Opera Theatre.

The Peabody Opera Theatre’s spring production, The Crucible by Robert Ward, will be presented March 14 to 17 in Peabody’s Miriam A. Friedberg Concert Hall with the Peabody Concert Orchestra conducted by JoAnn Kulesza. Brunyate is the production’s director and designer.

To purchase tickets for The Rake’s Progress, go to www.lyricoperahouse.com or call 410-900-1150. For the complete Peabody events calendar, go to www.peabody.jhu.edu/events.