80-plus years of the Woman’s Club 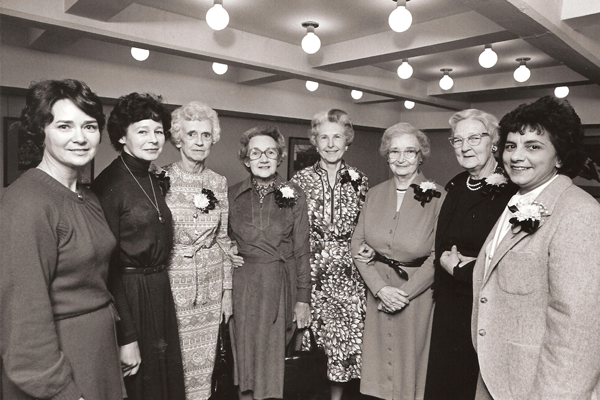 They aided the war effort in the 1940s, wrapped presents for returning veterans and, in more recent years, have supported local schools and awarded scholarships to Johns Hopkins students in multiple divisions.

But let it be said, in their day, the members of the Woman’s Club of The Johns Hopkins University could throw one doozy of a tea party.

The Woman’s Club, which turned 80 last year, has certainly changed with the times. This month, the club launched its new website, ushered in a membership drive that extends to all university affiliates and began prepping for its 2012 slate of community service projects.

The Woman’s Club has come a long way since its early days as a social group for the wives of faculty members at the Homewood campus.

Joseph Ames, the university’s fourth president, initiated the group in 1930. At the time, due to a shortage of inexpensive housing near the Homewood campus, younger married faculty members were often forced to live outside the immediate area. So Ames asked Mary Willard Berry—the wife of Edward Berry, dean of the College of Arts and Sciences—to form an organization of women faculty members and faculty wives to promote social and cultural contacts among their number.

“Not much is known about Mary Berry, but clearly President Ames thought enough of her to gather these women together and start a group to be collegial in nature,” said Rooney Peterson, immediate past president of the group, current historian and wife of Ronald Peterson, president of The Johns Hopkins Hospital and the Johns Hopkins Health System.

In late 1930, Mary Berry presided over the first organizational meeting of what was originally called the Women’s Faculty Club.

The club promoted various interests among its members, including literature, music, drama, gardening, art and foreign languages. The club’s annual Fall Tea, held in October, would welcome new members, who would pay annual dues of $1.

Following Mary Berry’s death in 1939, members voted to change the name of the club to the Mary Willard Berry Club.

In January 1942, the club formed a Red Cross group to help with the war effort. Members would stich medical dressings for use at The Johns Hopkins Hospital. Also during this period, members served as air raid wardens, hospital laboratory technicians, nurse’s aides and gray ladies. They also sent care packages to U.S. soldiers.

In the post-war years, the group would continue to support the military by wrapping and delivering gifts to those at the Baltimore Veterans Hospital. The club’s numbers spiked, aided by the university adding faculty to meet the demand of returning military veterans. The interest groups, which went into hiatus during the war years, came back to life.

In 1948, membership in the group was extended to include the wives of School of Medicine faculty. Three years later it was opened up to faculty wives at all Johns Hopkins divisions, and the club’s name was changed to the Woman’s Club of The Johns Hopkins University.

“Long before President [Ron] Daniels, we championed one Johns Hopkins University,” Peterson said. “We were the only group [in the early years] that extended over all university schools and affiliates. We’ve been doing this a long time.”

The group famously put on annual spring and Christmas teas. During the tenures of university presidents Isaiah Bowman (1935 to 1948) and Detlev Bronk (1949 to 1953), the Spring Tea was held at the president’s house at Oak Place, located north of the campus. It would later be held at Evergreen House and other locations, and became the club’s formal annual meeting. The university president was often invited as guest speaker to update members on the Johns Hopkins’ “important and exciting developments,” Peterson said.

(This tradition continues: In recent years, the club has organized a luncheon or brunch specifically to hear updates on the university campuses. This year’s guest speakers will be Michael Klag, dean of the Bloomberg School of Public Health, and David Andrews, dean of the School of Education.)

The Christmas Tea, held in Levering Hall on the Homewood campus, would be equally spectacular, with live music, caroling and decorations put up by the club’s gardening committee. The event, which drew upward of 300 people, included a formal receiving line with the president of the university and his wife.

“They were big, lavish occasions, especially during the 1950s and 1960s. They were the days of women in hats and gloves. It was the social event of the year,” Peterson said. “Being chosen to pour the tea was quite an honor, according to some of the club members who participated in the event.”

During the 1960s, club membership swelled to 444 members with 18 interest groups, including five separate language groups. By decade’s end, the club added a service element that would become integral to its ongoing mission.

Initially, the members participated in child care, started an after-school program for girls at the nearby Barclay Elementary and Middle School, and participated in the Baltimore Mayor’s Task Force on Nutrition.

Throughout the next three decades, the club would enhance its service mission and add new interest groups, including ones on investment, business and computer skills.

In the 1970s, the Woman’s Club started a volunteer program to work in the library and enrichment programs at the Barclay School. The club played a vital role in establishing the school’s library as a viable resource for students and teachers. It donated and cataloged hundreds of books, purchased bookshelves and office supplies and, for many years, ran the library. Currently, 12 members of the club volunteer at the school on a weekly basis.

“Beginning in the 1970s, the group developed more of a social consciousness and interests that it would carry moving forward,” Peterson said.

The group initiated a scholarship program in the 1980s that began as a $100 book scholarship. Today, the club annually gives out a $1,500 award—to help offset student expenses—that rotates among the various academic divisions of the university. This coming year, it will be awarded to a student in the Johns Hopkins Carey Business School.

The Woman’s Club has also donated money to the Village Learning Place in Charles Village to set up a listening center, and last year helped with a school reading project at the East Baltimore Community School, now run and operated by Johns Hopkins University in partnership with Morgan State University. This year, the club will donate money and books to help establish an Early Childhood Library at the school.

Currently, the group has just under 100 members. The Woman’s Club’s continued purpose is to provide its members with opportunities for social interaction and intellectual enrichment, as well as to support service projects that benefit Johns Hopkins and the surrounding communities.

The club also educates its members on all things Johns Hopkins, hosting tours of various campuses and talks by university leadership. Last year, the group hosted a tour of the newly renovated Gilman Hall and a lunch with President Daniels and his wife, Joanne Rosen.

Marilyn Tabb, the club’s current president, said that as the group looks to the future, it realizes it needs to re-energize itself with new members.

“We certainly want to keep this going and continue the club’s legacy of service,” said Tabb, who is the wife of Winston Tabb, Sheridan Dean of University Libraries and Museums at Johns Hopkins. “We feel we still have a vital role to play at Johns Hopkins, and we want to recruit new members who will lead the group into a new age.”

To learn more about the club and membership, go to web.jhu.edu/jhuwomansclub.